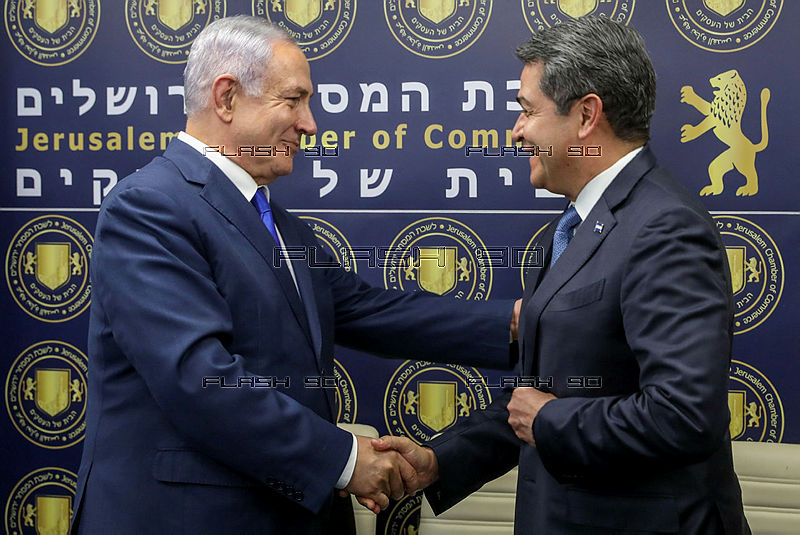 Honduras opened a “Trade and Cooperation” office in Yerushalayim on Sunday at a ceremony attended by Prime Minister Binyamin Netanyahu and Honduran President Juan Orlando Hernandez, who together hailed it as a step toward moving the country’s embassy to the Israeli capital.

“Today is a historic day for Honduras and Israel,” Hernandez declared, and promised that the embassy would be transferred in the coming month. In the meantime, the new office, which has “diplomatic status” as it is considered an extension of the Honduran embassy in Tel Aviv, will be operate out of the Yerushalayim Chamber of Commerce on 10 Hillel Street.

Netanyahu reciprocated with a promise of reciprocity: “I have committed, and this is a commitment I want to repeat again: We will open embassies simultaneously,” he said. “We are going to open an office of trade and technology in Tegucigalpa soon. Now. Next week. There is this reciprocity of friends, genuine friends.”

Earlier on Sunday, Hernandez visited the Kosel, where he was accompanied by the Rabbi of the Kosel, Rabbi Shmuel Rabinovich,

“Thank you, Lord, for allowing me to represent Honduras at this time, to promise the fellowship with Israel,” he wrote in the Kosel guest book. “May this be the beginning of a blessing for our people. Thank you Israel, our brothers, who keep guard of this holy city. May peace keep spreading among the nations.”