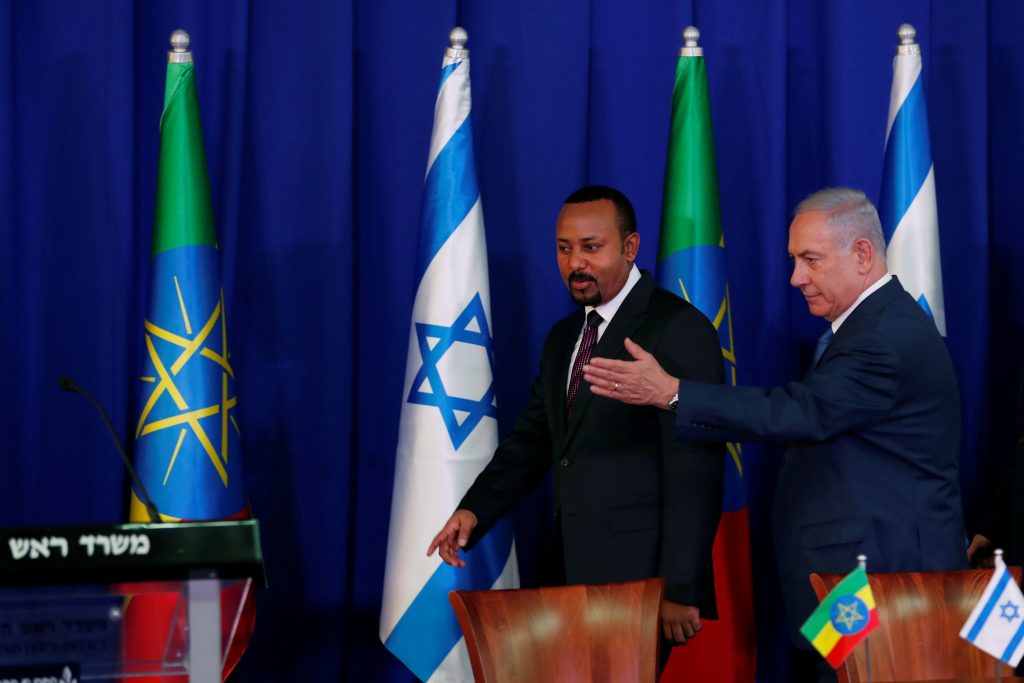 Abiy, on a two-day visit, talking briefly with the mother of Avera Mengistu, an Israeli civilian held in captivity by Hamas in Gaza, and said that he would like to “take this opportunity to pay respects to the family of Solomon Teka, an Ethiopian Israeli, who lost his life in a tragic event here in Israel,” referring to the teenager killed by an off-duty policeman in an incident earlier in the year.

He also issued condolences to the families of three Israelis who lost their lives in Ethiopia this year: Shimon Re’em and Avraham Matzliah, who were killed in the crash of an Ethiopian airliner in March, and Aya Na’aman, who died during a trek in the Ethiopian Salt Desert in August.

In times of tragedy, he said, the two countries “mourn together as two families.”

PM Netanyahu acknowledged Ethiopia’s help in those cases, saying, “I thank you and your government for your great humanitarian efforts to locate the missing Israeli tourist Aya Naamneh and returning her body home, and equally for the efforts to identify one of the two Israelis killed in the Air Ethiopia crash, Shimon Re’em, and returning his body to Israel. I know you personally made extraordinary efforts in that regard, and we are still working on a second Israeli in that tragic airplane crash. But you immediately responded to my requests as a sign of both humanity and friendship.”

The prime minister lauded the economic reforms embarked upon in Ethiopia, and noted a developing bilateral trade.

“Our trade is small, only $300 million, and can grow ten times,” he said, adding that trade and investments, as well as cooperation in matters of security, agriculture, water management and technology were to be the focus of their talks.

This is Abiy’s first visit to Israel since being elected in April 2018. On his arrival Sunday morning, he went directly to Yad Vashem, and from there to meet Netanyahu.