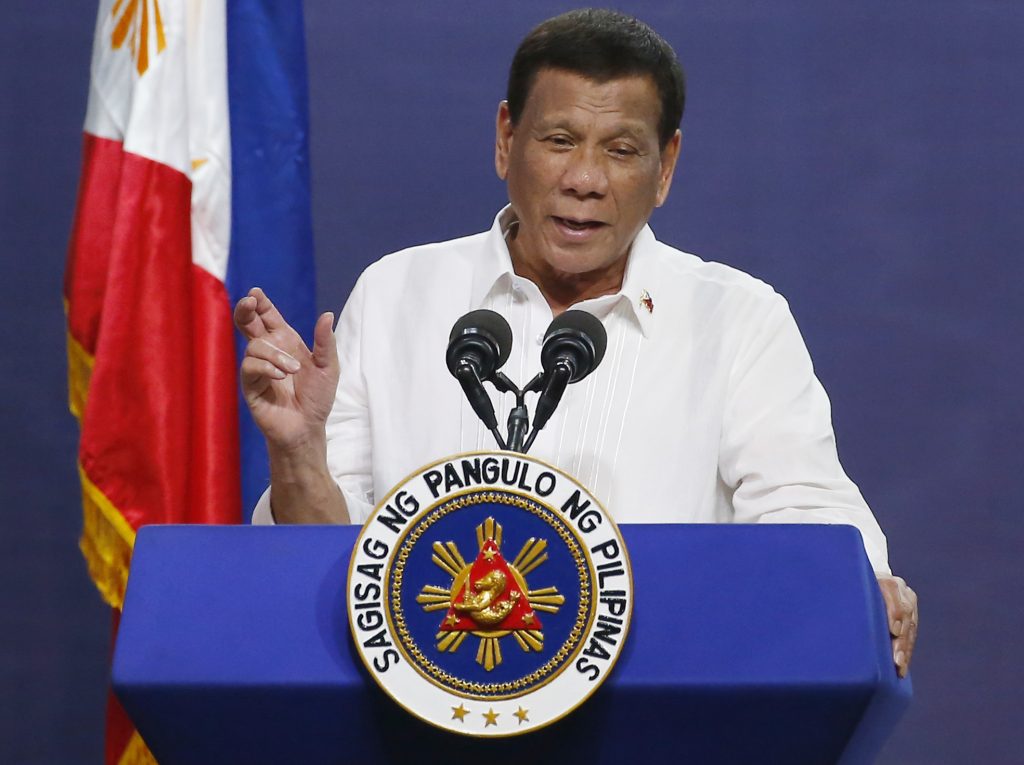 Philippine President Rodrigo Duterte was in Beijing on Thursday for a meeting with counterpart Xi Jinping, in which the Southeast Asian leader is expected to discuss a ruling on the disputed South China Sea.

The 2016 Hague arbitration mostly invalidated China’s claim to virtually the entire South China Sea and found that it violated the U.N. Convention on the Law of the Sea.

The dispute over the waters — a major global shipping route thought to be rich in oil and gas reserves — has for years marred China’s relationship with the Philippines and other neighboring countries with territorial claims to the disputed area, where Beijing has transformed a string of disputed reefs into missile-protected island bases.

Duterte, however, has largely avoided the subject in favor of seeking warmer ties with Beijing. Philippine nationalists and left-wing groups have criticized the president for not immediately demanding Chinese compliance with the arbitration ruling, which came the same year Duterte took office.

Philippine Ambassador to China José Santiago Santa Romana told reporters Thursday that Duterte has mentioned the ruling to Xi several times, but not in a direct discussion as he plans to do at this meeting.

Duterte “has exerted a lot of diplomatic capital to build a reservoir of goodwill and friendship with President Xi,” Santa Romana said. “So he has decided that it’s time to include in the diplomatic agenda and in the discussions sensitive issues that may have caused misunderstanding if it were brought up in the past.”

Santa Romana added that Duterte is in Beijing “to build bridges, not to burn bridges with China.”

It’s unlikely that Duterte’s move will have any effect on China, said Jay Batongbacal, a maritime affairs scholar at the University of the Philippines.

“China’s position will not change just because Duterte changes tune,” Batongbacal said. “At best, Duterte might be seen as using the arbitration discussion as a move to leverage other concessions. At worst, it may be just for show.”

China refused to participate in the arbitration case initiated by Duterte’s predecessor, Benigno Aquino III, and has ignored the ruling. A Chinese Foreign Ministry spokesman said last week that the country’s stance has not changed.

Philippine Defense Secretary Delfin Lorenzana asked Beijing this month to explain the activities of Chinese research vessels and warships in what the Philippines claims as its waters, and accused China of “bullying.”

Lorenzana said that China did not ask for permission to send several warships through the Sibutu Strait at the southern tip of the Philippine archipelago on four occasions between February and July. He said two Chinese research ships have also been operating in the Philippines’ exclusive economic zone.

China has said it is ready to work with the Philippines to jointly safeguard maritime security and order. In an apparent attempt to ease tensions ahead of Thursday’s meeting, a fishery association in southern Guangdong Province apologized this week for colliding with a Philippine fishing boat in June.

The Philippines filed a diplomatic protest after the fisherman said a Chinese vessel rammed their anchored boat and abandoned them as it sank in the Reed Bank.

“I feel deep regret that this accident had to happen and I would like to express my deep sympathy to the Filipino fishermen,” the president of the Guangdong Fishery Mutual Insurance Association said in a letter sent to the Philippine Embassy in Beijing.

Santa Romana said Thursday that the Philippines wants to achieve joint exploration with China in the South China Sea in order to address the country’s energy security and power supply issues.