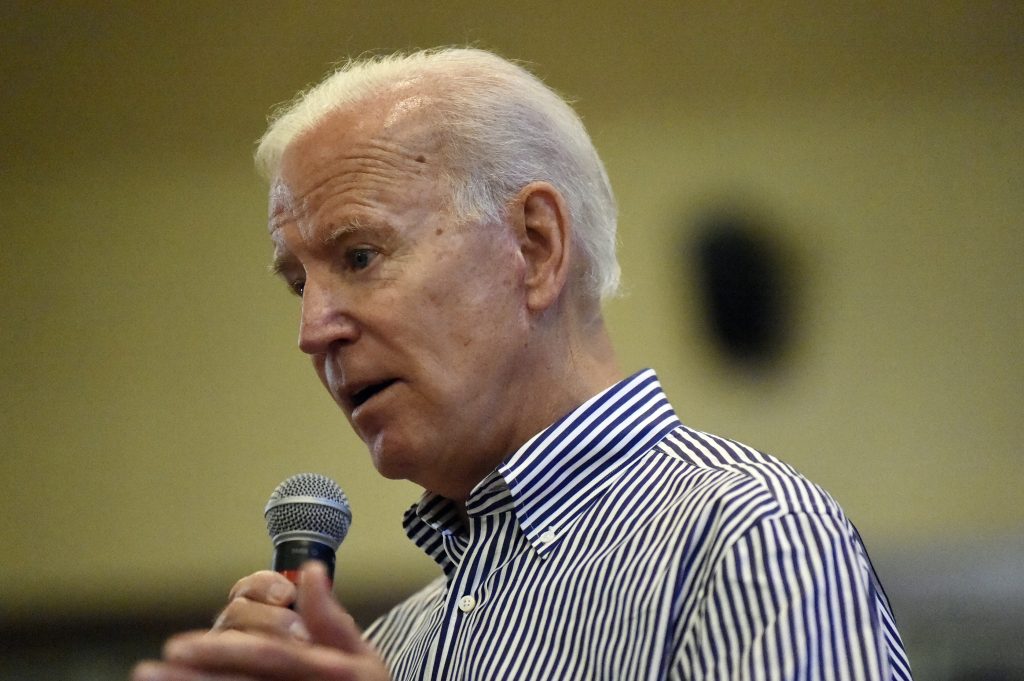 A major in the Army National Guard is facing public scrutiny for improper partisan political activity after appearing in uniform at a campaign event for Joe Biden in South Carolina and publicly telling the former vice president that she hopes and prays he will be the next president.

Maj. Ginger Tate, a member of the South Carolina Army National Guard, took the microphone on Wednesday at a campaign event in the town of Gaffney and recounted how she led 130 troops during a 2013 deployment to Afghanistan. She said she saved her unit’s coin so she could present it to Biden and President Barack Obama should she ever meet them.

“Thank you so much for your guidance as I took 130 soldiers over, and I brought them back,” Tate said through tears, according to video footage of the event posted widely on social media. “I am so honored to have served under your administration and your leadership, and I hope and pray that you will be our next president.”

Tate is now facing public scrutiny over whether her actions violated Department of Defense Directive 1344.10, which restricts members of the military from partisan political activities.

Tate isn’t on active-duty status, according to a spokesman for the South Carolina National Guard. That means she drills one weekend a month and trains two weeks a year, apart from when she is called up to active-duty status for assignments or deployments.

Inactive service members are allowed to participate in political activities, but the Department of Defense directive stipulates that they should not appear in uniform and should refrain from behaving in a manner that could give the appearance of an official endorsement.

Capt. Jessica Donnelly, a spokeswoman for the South Carolina National Guard, said a formal investigation of the incident would be unnecessary, suggesting the violation of the directive was clear on its face.

“There is no investigation needed, the Soldier engaged in political activities that imply or appear to imply sponsorship, approval, or endorsement of a political candidate, while in uniform,” Donnelly said in an email.

The incident is the latest example of uniformed service members facing blowback for engaging in questionable partisan activity while in uniform. It comes as military leaders strain to avoid politicization in a deeply divided country run by a commander in chief who has regularly taken partisan jabs at his political rivals while appearing before uniformed personnel at military events.

Late last year, service members in Germany and Iraq presented red “Make America Great Again” campaign hats to President Donald Trump for his signature, raising questions about political partisanship among uniformed personnel. In May, the U.S. Navy launched a probe after sailors wore patches displaying Trump’s image and a play on his campaign slogan during a presidential visit to Japan.

Such incidents aren’t entirely unique to the Trump era. During the 2012 presidential campaign, an Army reservist was disciplined for endorsing then presidential candidate Ron Paul during a rally.

Tate’s appearance at the Biden event in South Carolina, which she described as an impromptu decision in her speech at the rally, came the same day that the chairman of the Joint Chiefs of Staff, Gen. Joseph Dunford, said U.S. military personnel “with very few exceptions” have conducted themselves properly in a “very politically turbulent time.”

Appearing alongside Dunford at a Pentagon news conference, Defense Secretary Mark Esper, a former Army officer himself, committed to keeping the Department of Defense apolitical and said the Pentagon would continue to enforce standards throughout the services regarding political activities.

“My commitment is to keep this department apolitical,” Esper said. “And I believe the best way to do that begins with the chairman and I behaving in an apolitical way. And from there, the leadership that we demonstrate, the values we emulate, work their way throughout the force, and to me, that’s the best way to do it.”

Tate declined to comment on Thursday when contacted by The Washington Post. She referred queries to the South Carolina National Guard.

In a statement, the South Carolina National Guard declined to say whether Tate would be facing disciplinary proceedings, citing privacy laws.

“Her chain of command and leadership are aware of the incident; however, due to the Privacy Act’s protection of the records of individuals, the South Carolina National Guard is not able to release the specific personnel actions that are being taken,” the Guard said.

The Guard noted that there are specific guidelines for military personnel when it comes to participation in political events. “These guidelines state that service members are not to engage in political activities that imply or appear to imply sponsorship, approval, or endorsement of a political candidate, while in uniform,” the statement said.

A spokesman for the Biden campaign didn’t immediately respond to a request for comment.