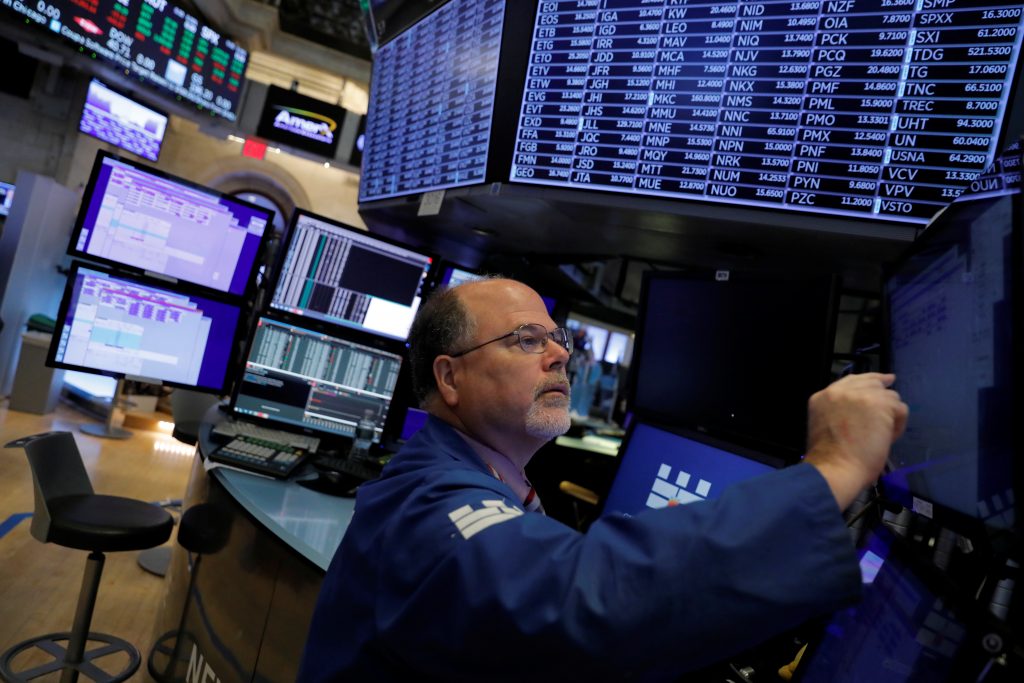 Financial stocks fell the most as bond prices surged, pulling yields sharply lower. The yield on the 10-year Treasury note fell to 1.48% from 1.54% late Monday. That yield is the benchmark for interest rates that banks charge on mortgages and other consumer loans. JPMorgan Chase fell 1.6% and Citigroup dropped 2.3%.

The latest losses undercut some of the gains from Monday, when tentative optimism among investors about the potential for progress in the costly trade conflict between the U.S. and China drove a broad market rally.

The market is on a four-week losing streak as investors try to gauge whether trade conflicts and slowing economies around the world will drag the U.S. into a recession.

Last week, the trade conflict escalated again, with Washington and Beijing threatening new tariffs on each other’s goods, triggering a sharp sell-off in global markets. On Monday the market recouped some of those losses after President Donald Trump said his negotiators had received encouraging calls from China over the weekend. Traders drew encouragement from the development, even though China’s foreign ministry denied knowledge of any such calls.

Market watchers are becoming increasingly circumspect about what lies ahead. UBS, the largest wealth manager in the world, recommended that customers reduce their exposure to stocks, the first time the bank has done so since the depths of Europe’s debt crisis in 2012.

U.S. indexes are on track for losses of 3% or more in August in what has been a volatile month for the market.

ANALYST’S TAKE: While the inversion in the yield curve between the 10-year and two-year Treasury notes has been a good indicator of a coming recession in the past, it usually means a recession is at least a year off, said J.J. Kinahan, chief market strategist for TD Ameritrade.

“Just because it happened doesn’t mean the world ends,” he said. “We do still have the China tariff situation, which many believe, if settled quickly, could also lead to a quick economic expansion.”

TRADE WAR: On Friday, China announced new tariffs on $75 billion in U.S. goods. President Trump responded angrily on Twitter, at one point saying he “hereby ordered” U.S. companies with operations in China to consider moving them to other countries, including the U.S.

Trump later announced the U.S. would increase existing tariffs on $250 billion in Chinese goods to 30% from 25%, and that new tariffs on another $300 billion of imports would be 15% instead of 10%.

Analysts say uncertainties are bound to remain for global markets as long as Trump continues to send conflicting messages.

“The bigger picture is that deep-seated issues are unlikely to be resolved on the flick of a switch or tweet,” said a report from the Asia & Oceania Treasury Department of Mizuho Bank.

BIGGER TOBACCO: Shares in Philip Morris International fell 5.8% after the maker of Marlboro cigarettes confirmed that it is in merger talks with Altria more than a decade after the tobacco companies split. Altria has focused on cigarette sales in the U.S. while Philip Morris has handled international sales. Philip Morris said that there is no guarantee of success in what would be an all-stock deal. Altria shares dropped 2%.

NOT SO SNACKWORTHY: J.M. Smucker sank 9.3% after turning in weak results.

NOT SO PAINFUL: Johnson & Johnson rose 2.3% after a ruling against the company in an Oklahoma opioid case wound up being less than investors were expecting.