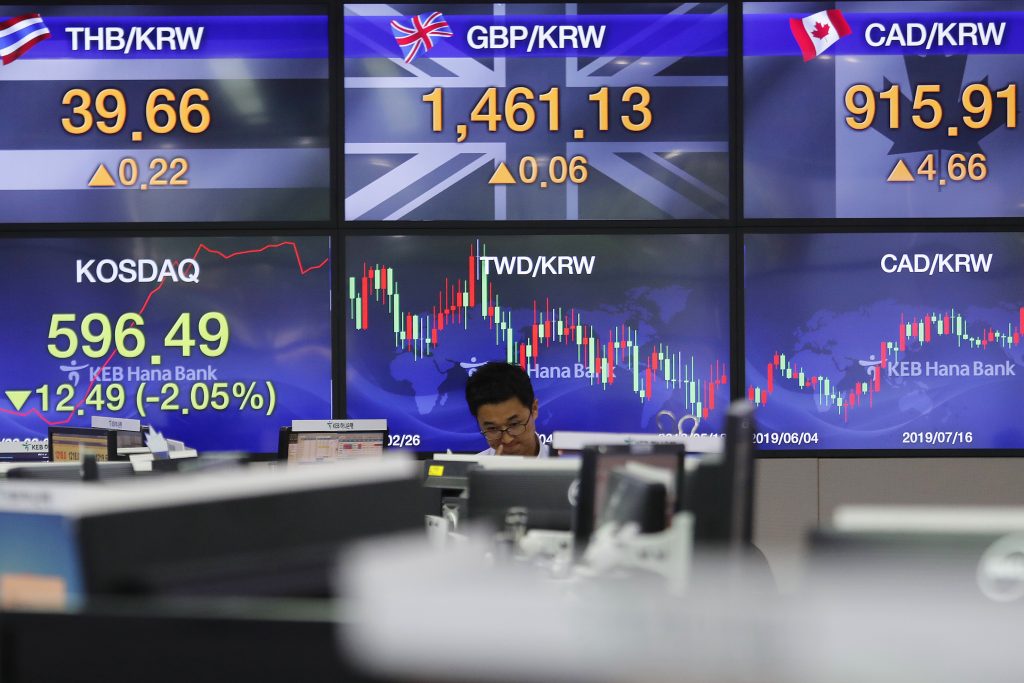 Shares mostly fell Monday after the latest escalation in the U.S.-China trade war renewed uncertainties about global economies, as well as questions over what President Donald Trump might say next.

“Nobody understands where the president is coming from,” he said, adding that the best thing Trump can do for market stability is to “keep quiet.”

“The problem that we’re faced [with] right now is that we are making a lot of assumptions ahead of the economic realities,” he said.

The market is now dominated by fears of a portended U.S. recession, although the American economy is actually holding up, and much of the U.S. economy is made up of consumption, Innes said. If interest rates come down, he added, consumer spending is likely to go up, working as a buffer for the economy.

“What the market’s really waiting for is for them to drop interest rates,” Innes said. “Right now, we are still sitting on that uncertainty.”

At a meeting of the G-7 economies in France, Trump appeared to tone down his comments, saying the two sides will talk “very seriously” about their war over trade and technology. He also said the Chinese “mean business.”

On Monday, China allowed the yuan to fall. The yuan declined to 7.1468 to the dollar, a relatively modest change from Friday’s low point of 7.0927 but its weakest rate since January 2008. The yuan has lost 6.5% from this year’s high on Feb. 28. Chinese leaders have promised to avoid “competitive devaluation” to hold down export prices in the face of Trump’s tariff hikes.

The Dow Jones Industrial Average plunged more than 600 points Friday after the latest escalation in the trade war between the U.S. and China rattled investors. The broad sell-off sent the S&P 500 to its fourth straight weekly loss.

The tumbling began after Trump responded angrily on Twitter following China’s announcement of new tariffs on $75 billion in U.S. goods. In one of his tweets he “hereby ordered” U.S. companies with operations in China to consider moving them to other countries — including the U.S.

Trump also said he’d respond directly to the tariffs — and after the market closed he delivered, announcing that the U.S. would increase existing tariffs on $250 billion in Chinese goods to 30% from 25%, and that new tariffs on another $300 billion of imports would be 15% instead of 10%.

The ongoing trade dispute between Washington and Beijing, and especially its unpredictability, is certain to have damaging effects on Asia. The unpredictability affects the real decisions central banks make on fiscal policy and companies make on their strategies and investments, setting off ripples of uncertainty.

Zhu Huani of Mizuho Bank in Singapore said that what he called Trump’s “tariff tantrum” was setting off “the sense that tariffs could continue to rise,” with the “the unpredictability of timing and extent of these trade actions risk accentuating the paralysis of business decisions and big-ticket business spending.”

“No matter which way you cut the cake, it is nearly impossible to construct a bullish, or even neutral scenario for equity markets today,” said Jeffrey Halley, senior market analyst at Oanda.

Trump also said Friday morning that he was “ordering” UPS, Federal Express and Amazon to block any deliveries from China of the powerful opioid drug fentanyl. The stocks of all three companies fell as traders tried to assess the possible implications.

Some analysts think the Federal Reserve will lower interest rates this year.

Federal Reserve Chair Jerome Powell indicated last week that the central bank was prepared to cut interest rates but gave no clear signal on when or by how much, while suggesting that uncertainty over Trump’s trade wars have complicated the central bank’s ability to set interest rate policy.

A quarter-point rate cut reduction in September is considered all but certain. Some think the Fed will cut rates again in December.

The price of benchmark crude gained 9 cents to $54.26 a barrel. It sank $1.18, or 2.1%, to settle at $54.17 a barrel Friday, as traders worried that the latest escalation in the trade battle could sap global demand for energy. Brent crude oil, the international standard, rose 8 cents to $59.42 a barrel.