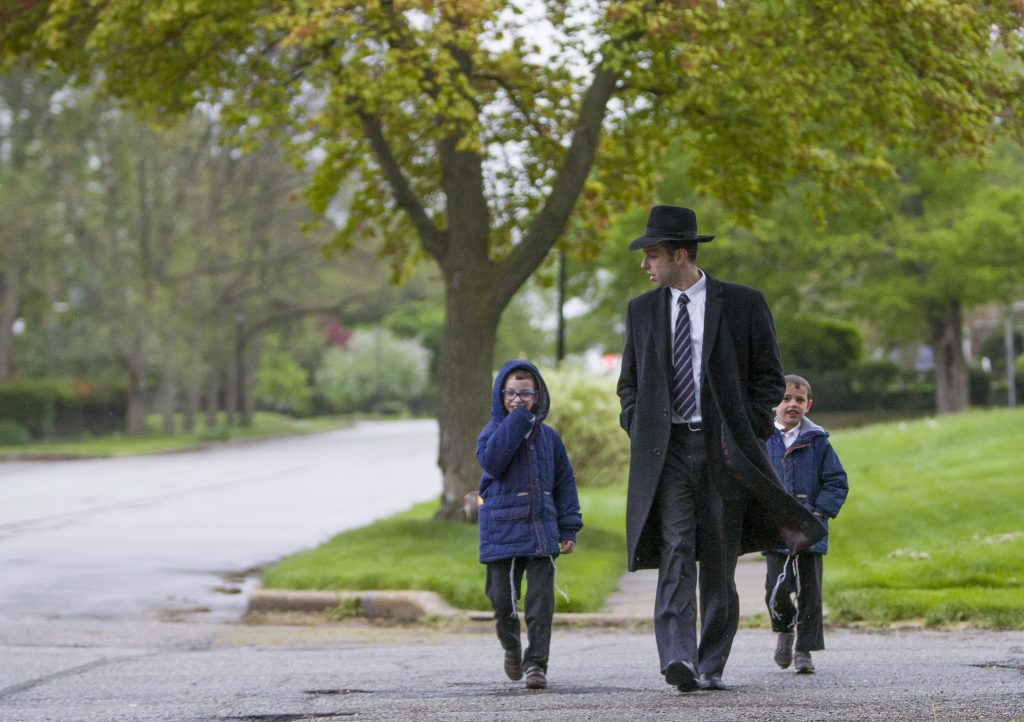 At this time last year, Zev and Tehiya Meyers were raising their two daughters, ages 8 and 13, in a two-bedroom apartment in west Los Angeles’ densely populated Pico-Robertson neighborhood.

Zev, 52, forced to retire early from mortgage banking because of a disability, and Tehiya, a teacher, were spending at least $20,000 annually in school tuition while battling traffic congestion and other “big city” ills that Zev, a lifelong Angelino, said he had always known but doesn’t like.

Their world improved dramatically last fall, Zev said, when they moved to South Bend’s Twyckenham Hills area — Tehiya and the girls flew while Zev drove their belongings in a U-Haul. Here, they’re renting a three-bedroom house with a yard for less than half of their L.A. apartment rent. They soon plan to buy a home, possibly spending around $150,000 instead of the nearly $1 million that many typical Pico-Robertson homes cost. And the girls attend South Bend Hebrew Day School for free, thanks to Indiana’s school choice voucher program.

“Even on a rush hour with one lane closed down there’s still no traffic compared to L.A.,” Zev said. “People in the Midwest are nicer. They’re a lot more calm, they’re open. I can have a conversation with anyone at any time, it doesn’t matter what color, what religion, what their politics are. Although there’s a change of pace, it’s a welcome change of pace. I love it.”

The Meyers family aren’t the only Orthodox Jews moving to South Bend from larger metro areas for these reasons. The Michiana Jewish Business Association’s Community Development Initiative has been recruiting them and helping them settle into the community for a decade, adding about 70 families to South Bend during that time. But the growth has accelerated since new CDI executive director Simon Springer took the job in August 2017.

Since the end of last year, Springer said, 20 to 30 people from around the nation, Canada and Israel have been contacting him monthly to ask about South Bend, up from five to seven inquiries per month when he started. There are now about 120 Orthodox families here, and Springer hopes 10 more families he’s been working with will come by December. Another four families have committed for next year.

During a recent interview in his office, housed at the Jewish Federation of St. Joseph Valley’s campus on South Bend’s far eastern edge, Springer showed a reporter a chart that he’d drawn in red marker on a white dry-erase board, with column headings “visited,” ”jobs” and “wants to move.”

“They’re visiting,” he said, pointing to a name on the chart. “His wife is pregnant so they had to wait a little bit but they’re visiting in two weeks. He’s coming next week. And I just spoke with them last night and I’m having a secondary conversation later today with them.”

Of the 10 people on the chart, four live in New Jersey suburbs of New York city, one is in the city itself, two live in Chicago, and others live in Cincinnati, Cleveland and Las Vegas. Most learned of South Bend through job listings Springer has posted online within the Jewish community. Springer, while noting an abundance of job opportunities locally, said he dissuades some from coming if he thinks they’ll have a hard time finding work here.

Springer, who works with human resources officials at area employers, said he’s especially seeking doctors and accountants, but generally professionals, people who won’t need help from “communal funds” in the local Orthodox community or public assistance of any kind.

“This guy is a cybersecurity guy,” he said, pointing to his chart. “This guy’s an accountant. This guy is a highly educated educator in New Jersey. This guy was higher up in the Israeli Defense Force and he wants to move here, and take his training in security stuff and start something here. He’s a young guy. He’s 25 now so he just got out (of the Israeli military) a little bit ago. Everybody I’ve brought his résumé to, they’ve been super impressed.”

Springer said it’s become more socially acceptable in recent years for Orthodox in New York, Chicago and L.A. to leave their tightly knit but crowded communities to escape spiraling living costs and congestion. South Bend is one of 57 communities that the Orthodox Union, a Washington, D.C.-based advocacy group, promotes on its website as places to consider for those who are looking to move. But with the exception of South Bend, Harrisburg, Pennsylvania, (population 49,000) and three beach towns in Florida, all of the communities on the site are suburbs or are large cities themselves.

Meyers said that when the couple decided to move here, some family members asked where South Bend is. But last week his mother-in-law visited and was impressed by the downtown, especially the historic Morris Performing Arts Center.

“When I found it, all I knew about South Bend was AM General was where they make Humvees,” Meyers said. “You can say it’s small but you have, in South Bend, its own symphony, cool theaters, there are great parks here, everything you would have in Los Angeles you would have here.”

The Orthodox mostly live in the Twyckenham Hills area on South Bend’s south side, but not because they’re afraid to fully integrate across Michiana. The neighborhood happens to be within walking distance of two Orthodox synagogues or “shuls”: Hebrew Orthodox Congregation, established in 1887, and the smaller Midwest Torah Center, founded in 2007. Their synagogues must be within walking distance because the Orthodox don’t use machines, including cars, on the Sabbath, which runs from Friday evening to Saturday evening. Springer said the tight housing market has made it “a little tough” to find homes in that area for newcomers.

The store’s manager, Aryeh Kramer, moved to South Bend in 2012 from Lakewood, New Jersey, with his wife Shani. Like most Orthodox families, theirs is large, with four children ranging in age from 3 to 10.

“They had a lot of the amenities we want, but it’s expensive and overcrowded,” Aryeh said. “(South Bend’s Orthodox amenities) are limited but you’ve got the individuality. We’re a big part of everything that goes on here. Here everybody feels like their talents are actually used and valued because the reality is people are needed to fill every position in the community for whatever’s going on. There’s a little bit more responsibility for everybody to get involved so for those that like that, it’s a nice feeling to feel needed, like you’re doing something.”

Aryeh and Shani hadn’t seriously been looking to move. They’d recently bought a house in Lakewood when they woke up on July 4 weekend in 2012 to realize their air-conditioning had failed. To escape the hot house, they ate at a restaurant, where they were flipping through an advertising publication and saw an ad that read, “Small community looking for a manager for a kosher store,” Shani recalled. Aryeh had been managing kosher sections of two grocery stores, commuting to work an hour and a half each way, and with two small children, Shani wished he worked closer to home.

Shani, originally from the Cleveland area, had heard of South Bend because her sister married a man from here. Knowing their air-conditioning wouldn’t be fixed until Monday, they decided to drive 12 hours to South Bend for the weekend and Aryeh interviewed for the job on Sunday morning.

“We were just so blown away by the warmth of the community,” she said. “Everyone was so friendly with their Midwesterner charm. On the way back we’re like, OK so we’re moving here. How do we tell our parents? They were really shocked, actually.”

Shani’s sister also has since moved to South Bend.

“This is amazing because they said they would never move to a cold climate, and this is pretty bad climate,” Shani said. “That’s the one thing I don’t like about South Bend. But she was so amazed by what I told her. She didn’t believe me and guess what, she came one time also and she also got blown away and they moved here.”

Aryeh’s chef and assistant manager, David Brandes, 34, moved here in 2016 from West Rogers Park, Chicago’s largest Orthodox community, with his wife Eliana and the two children they had then. Eliana was able to start telecommuting in her job as a paralegal with a Skokie, Illinois, law firm. For the first couple of months in South Bend, David said he didn’t work because he was relishing their newfound disposable income.

In Chicago, rent and tuition ate up nearly half of their combined $60,000 annual income. Eliana was expecting a child when they moved, and after they arrived, they learned she was expecting twins.

Brandes said West Rogers Park felt much smaller as he was growing up, like South Bend feels to him now, before it started growing so rapidly over the past 15 years as Orthodox Jews flee New York’s congestion.

“You take care of your material needs (more easily) so you don’t have to worry about it. As a Jew, my important thing is my spiritual stuff.”

Brandes and Springer said they want South Bend’s Orthodox community to keep growing, with no concerns in the near future that growth will come too fast. The store needs to expand — Brandes hears a lot of requests for kosher bagels and pizza — and is looking for a larger space elsewhere on the south side.

South Bend Hebrew Day School, 206 W. Eighth St., in Mishawaka, also has outgrown its building, the former South Side School, and wants to be closer to Twyckenham Hills. For the coming school year, it will begin leasing from the South Bend Community School Corp., the former Hamilton Traditional School building on Jackson Road, vacated last year by the corporation.

Brandes welcomes the growth but he wants it to be controlled. He said he has faith in Springer to find people who really want to live in South Bend for the right reasons, and who are tired of the materialistic, competitive culture in larger urban areas.

“We’re a little bit choosy about who moves here,” Brandes said. “I feel like as soon as places like Lakewood or New York hear about South Bend and we really get on the map, especially with the vouchers, there might be a lot of interest. We want to keep the Midwestern calm thing and keep all the hectic out.”