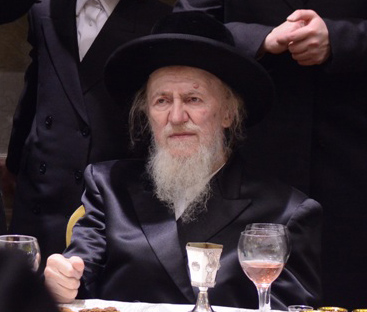 The Kalischer Rebbe of Flatbush, Harav Yosef Rosenbaum, zt”l, was suddenly niftar on Motzoei Shabbos at the age of 84.

The Rebbe collapsed during seudah shlishis in his beis medrash and was rushed to the hospital, where he was niftar late Motzoei Shabbos.

The Rebbe was the youngest son of the Strozhnitzer Rebbe, Harav Yissachar Ber Rosenbaum, zy”a, a scion of the Nadvorna-Premishlan dynasty, and his mother Rebbetzin Chayah Esther, a”h.

When he came of age, he married the daughter of Harav Shalom Michelovitz, the Brod-Radvill Rebbe, zy”a. He founded his beis medrash in Flatbush and named it after the city that his great-grandfather, Harav Meir Hagadol of Premishlan, zy”a, first founded his court. The Rebbe also had a beis medrash in Williamsburg, as well as a Talmud Torah in Boro Park.

He is survived by his elder brother, the Cleveland-Raanana Rebbe, shlita, children, grandchildren and many great-grandchildren.

The Rebbe’s brothers-in-law, via his Rebbetzin, are the Machnovka-Belz Rebbe, shlita, the Tchernobyl Rebbe of Boro Park, shlita, and the Radvill Rebbe of Monsey, shlita.