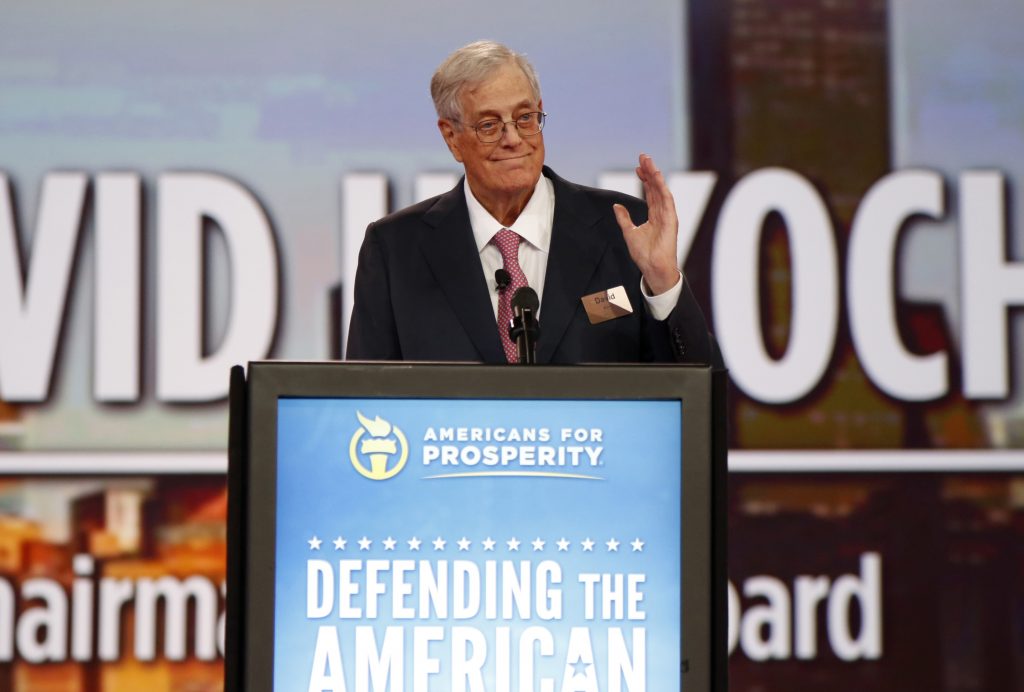 Billionaire industrialist David Koch, a driving force behind conglomerate Koch Industries who as one of the world’s richest people became a major financier of libertarian causes and political candidates, has died at age 79, his brother said on Friday.

Charles Koch, Koch Industries Inc’s chairman, disclosed the death in a statement that touched on his younger brother’s lengthy battle with prostate cancer and his philanthropic contributions to medical research, education and the arts.

“He will be greatly missed, but never forgotten,” Koch said in a statement addressed to employees. “David was proud of the extraordinary work you all have done to make Koch Industries the successful company that it is today.”

Koch, a philanthropist and patron of cultural and medical institutions, amassed his vast wealth with a large ownership stake in Koch Industries, the Wichita, Kansas-based company he ran with Charles.

With Charles as chairman and chief executive and David as executive vice president, Koch Industries – one of the world’s largest privately held businesses – aggressively expanded beyond the oil-refining business their father created into an array of new ventures.

David Koch stepped down from the business and political activities in June 2018, citing declining health.

He and his brother, both Massachusetts Institute of Technology-trained engineers, spent hundreds of millions of dollars to back libertarian causes and Republican political candidates. They were fierce critics of Democratic President Barack Obama but failed in their bid to stop him from being re-elected in 2012.

The brothers funded groups like Americans for Prosperity that spread their libertarian vision of conservatism advocating lower taxes and fewer regulations on businesses, and donated heavily to Republican candidates. Critics said the brothers used their riches to buy political influence and peddle positions that would benefit them financially.

The Kochs were no fans of businessman-turned-politican Donald Trump, and backed rivals for the 2016 Republican presidential nomination. Once Trump was nominated by the party, the brothers redirected their political donations toward congressional races rather than the presidential election.

Their father, Fred Koch, founded Koch Industries and built gas plants in Josef Stalin’s Soviet Union before becoming an ardent anti-communist and a founder of the archconservative John Birch Society.

In 1991, David survived a plane collision in Los Angeles that killed 34 people. After landing, his USAir flight from Ohio slammed into a SkyWest commuter plane on the runway.

“I felt that the good L-rd spared my life for a purpose,” Koch told New York magazine in 2010. “And since then, I’ve been busy doing all the good works I can think of.”

David, a 6-foot-5-inch former star of the MIT basketball team, was a familiar figure at cultural events in New York City, joined by his wife, Julia.

Koch donated more than $1 billion in his lifetime. He gave hundreds of millions of dollars to medical facilities, art and natural history museums and the New York City Ballet.

In addition to his wife, he is survived by three children.

Koch ran unsuccessfully for vice president in 1980 – running to the right of conservative hero Ronald Reagan – on a long-shot Libertarian Party ticket that called for abolishing income taxes, minimum-wage laws, government regulatory agencies, the Social Security retirement program, the FBI and the CIA.

David guided the chemical-equipment side of his company from his home in New York, while Charles remained in Wichita. The two brothers each owned 42 percent of Koch Industries.

The Koch brothers helped back the conservative Tea Party movement that arose after Obama took office and tenaciously fought his policies, including the 2010 Affordable Care Act.

Koch was diagnosed with prostate cancer in 1992 and underwent radiation treatment, surgery and hormone therapy. The experience prompted him to donate hundreds of millions of dollars to medical institutions, including MIT, Johns Hopkins University in Baltimore, M.D. Anderson Cancer Center in Houston, New York-Presbyterian Hospital and Mount Sinai Medical Center in New York.

David Koch was embroiled in a bitter family feud that erupted in 1980 in which his fraternal twin, Bill, and another brother, Frederick, accused David and Charles of cheating them out of hundreds of millions of dollars.

Two decades of court battles ensued. Their mother disinherited Bill and Frederick before her death. During one courtroom showdown in 1998, David sobbed on the witness stand while describing his broken relationship with his twin.

After a legal settlement with undisclosed terms in 2001 resolved the feud, the twins restored their relationship, and David served as best man when Bill married his third wife.

She recalled his dedication to their family on Friday, describing Koch as a father whose “sensitive heart had him …. beam with pride when his son beat him at chess. We will miss the fifth link in our family.”