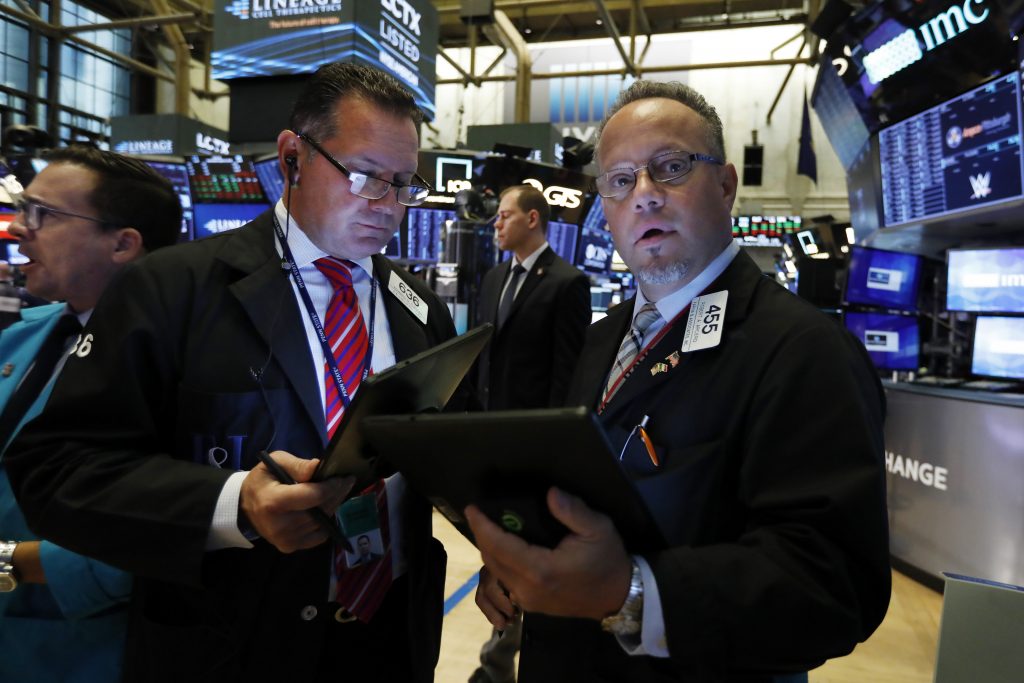 Stocks gave up an early gain and veered lower in midday trading Thursday as investors grew less certain about the likelihood that the Federal Reserve will lower interest rates again next month.

Remarks from central bank presidents questioning the need for the Fed to cut rates appeared to dim investors’ expectations. Some positive economic data this week could also have traders feeling less confident about the Fed lowering rates.

The futures markets reflected the shift Thursday. It showed investors are now predicting a 91% chance that the central bank will cut its benchmark rate by a quarter-point next month. That’s down from 98.5% the day before.

The central bank cut its benchmark rate in July for the first time in a decade to help shore up the economy amid signs of slowing global growth and uncertainty over the escalating trade war between the U.S. and China.

Minutes from the Fed’s July meeting released Wednesday provided little clarity on what the future course for rates will be. Traders are hoping to get a better read on Fed policy Friday, when Fed Chairman Jerome Powell is scheduled to speak at the central bank’s annual conference in Jackson Hole, Wyoming.

“The economic data that’s been coming out has been stronger than expected, and as a result, it’s giving the Fed additional reasons not to cut (rates) by 50 basis points in September and possibly introducing reasons why they shouldn’t cut at all,” said Sam Stovall, chief investment strategist at CFRA.

Consumer spending data has been solid, as have retail sales. A report Wednesday showed U.S. home sales rose last month, while a closely watched index of leading economic indicators released Thursday had a higher reading for July than analysts expected.

Other data have been less encouraging. A gauge of manufacturing activity released Thursday fell, reflecting slowing export sales and the worst new orders in 10 years.

Trading has been volatile this month as investors try to gauge whether the U.S. economy could be headed for a recession and whether the Fed will cut rates again to keep the economy on solid ground. A key concern is that the U.S.-Chinese tariff war will weigh on global economic and corporate earnings growth.

The Trump administration has imposed a 25% tariff on $250 billion in Chinese imports. A pending 10% tariff on another $300 billion in goods would hit everything from toys to clothing and shoes that China ships to the United States, however some 60% of the new tariffs wouldn’t go into effect until mid-December, and others were taken off the table altogether.

Investors have had reasons for some optimism this week after several big retailers reported solid quarterly results that suggest consumers are still eager to spend despite the cloudy economic outlook.

Major indexes in Europe were lower.

EYES ON THE FED: The Fed cut its key policy rate on July 31 for the first time in more than a decade. It cited a number of “uncertainties” that were threatening the country’s decade-long expansion, from Trump’s trade battles to slowing global growth.

Investors have been convinced that the central bank will follow up the July rate cut with further cuts at coming meetings, beginning with one next month.

But remarks from Esther George, president of the Fed’s Kansas City regional bank, and Philadelphia Fed President Patrick Harker, have injected some doubt about what the Fed will do next.

In interviews, both said they don’t see a need for another rate cut.

George and Eric Rosengren, president of the Boston Fed, dissented from the 8-2 rate cut vote, arguing that they favored no rate cut at all.

NOT SO STYLISH: L Brands slumped 4.7% after the owner of Bath & Body Works gave a third quarter earnings outlook that fell below what analysts expected.

STRONG RESULTS: Dick’s Sporting Goods gained 3.9% after the athletic apparel chain’s second quarter earnings and revenue came in ahead of analysts’ estimates. The company noted growth in all its key segments and raised its guidance for the year.