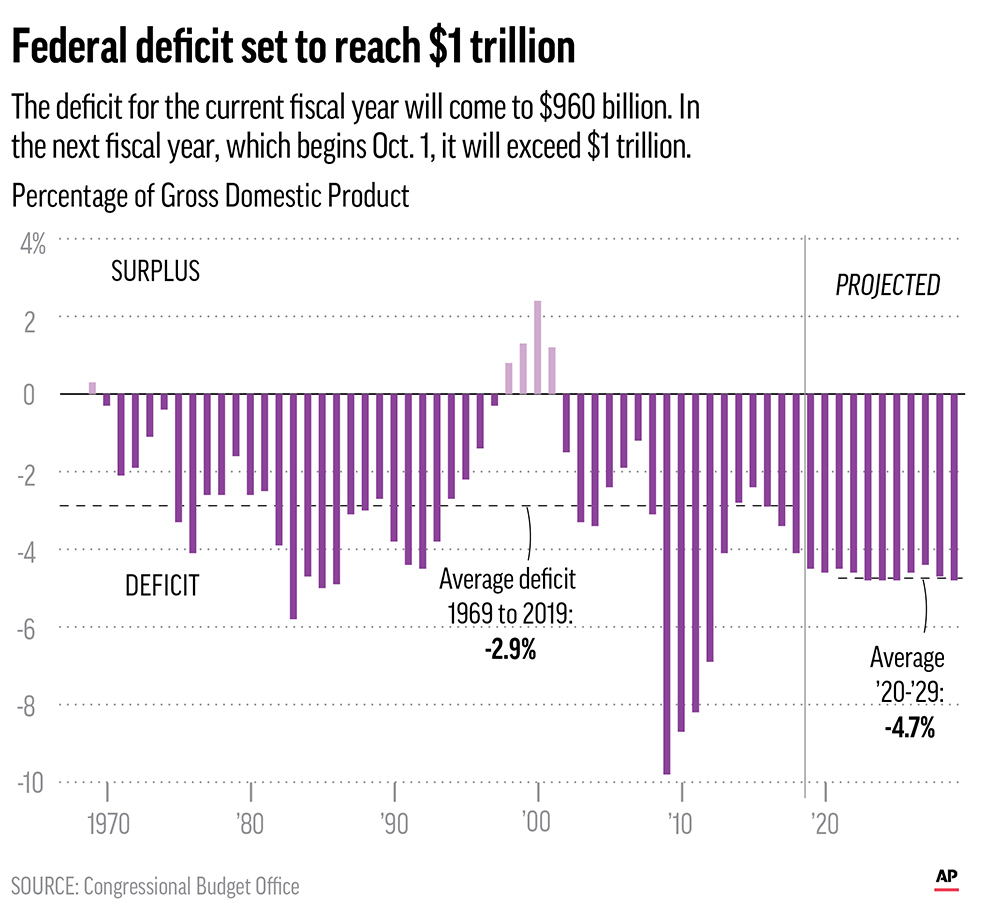 The federal budget deficit is expected to balloon to more than $1 trillion in the next fiscal year under the first projections taking into account the big budget deal that President Donald Trump and Congress reached this summer, the Congressional Budget Office reported.

The return of $1 trillion annual deficits comes despite Trump’s vow when running for office that he would not just balance the budget but pay down the entire national debt.

“The nation’s fiscal outlook is challenging,” said Phillip Swagel, director of the nonpartisan CBO. “Federal debt, which is already high by historical standards, is on an unsustainable course.”

The number crunchers at CBO projected the deficit for the current fiscal year will come to $960 billion. In the next fiscal year, which begins Oct. 1, it will exceed $1 trillion.

The CBO said the budget deal signed into law earlier this month, which took away the prospect of a government shutdown in October and the threat of deep automatic spending cuts, would boost deficits by $1.7 trillion over the coming decade. Increased spending on disaster relief and border security would add $255 billion. Downward revisions to the forecast for interest rates will help the picture, trimming $1.4 trillion.

Swagel said the federal debt will rise even higher after the coming decade because of the nation’s aging population and higher spending on health care.

To put the country on sustainable footing, Swagel said, lawmakers will have to increase taxes, cut spending or combine the two approaches.

The CBO projects that the economy will expand more slowly, from 2.3% this year to 1.8% on average in the next four years. The assumption reflects slower growth in consumer spending and government purchases, as well as the effect of trade policies on business investment.

The CBO’s estimate is the first to reflect the hard-won budget and debt deal signed into law earlier this month.

“The recent budget deal was a budget buster, and now we have further proof. Both parties took an already unsustainable situation and made it much worse,” said Maya MacGuineas, president of the private Committee for a Responsible Federal Budget.

MacGuineas said lawmakers should ensure the legislation they enact is paid for and redouble efforts to control the growth in health care costs and restore the solvency of the Social Security program. Her organization is focused on educating the public on issues with significant fiscal policy impact.

Senior White House adviser Kellyanne Conway pivoted to the president’s desire to fund the military and other programs when asked about the report.

“We’re always concerned about the deficit,” Conway said. “We also need to fund a lot of the projects and programs that are important to this country.”