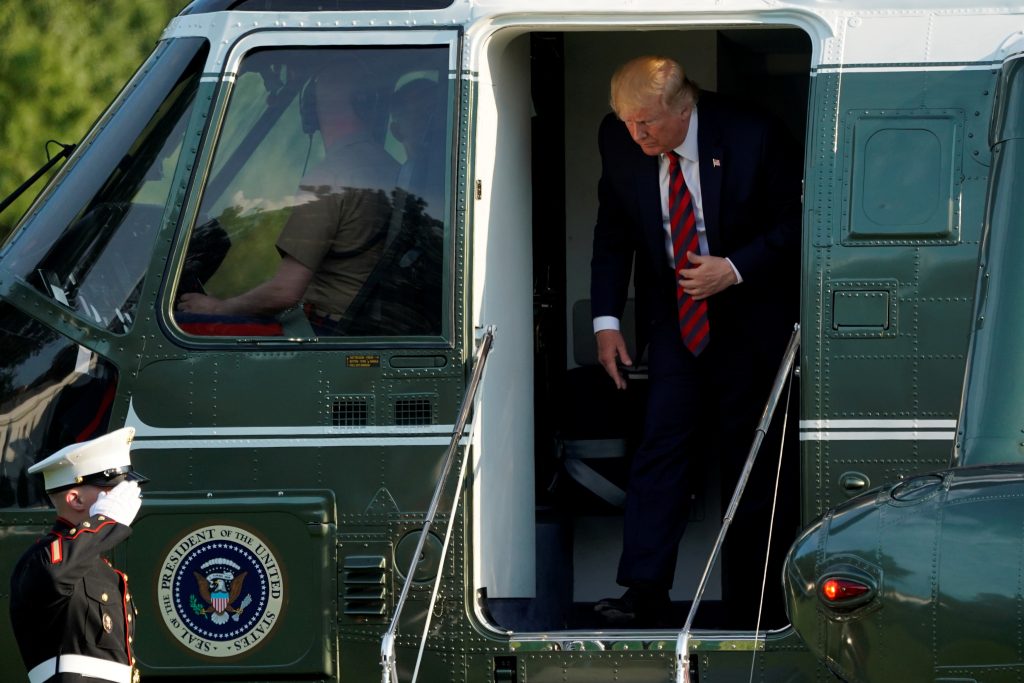 President Donald Trump lashed out anew Tuesday at Rep. Rashida Tlaib, D-Mich., questioning the sincerity of her tears at a news conference where she talked about her decision not to travel to Israel to see her elderly grandmother, who lives in PA controlled territory.

Speaking to reporters in Minnesota on Monday, Tlaib started to cry as she explained why she will not be making the visit under conditions demanded by the Israeli government, including a pledge not to promote boycotts against Israel while there.

“Sorry, I don’t buy Rep. Tlaib’s tears,” President Trump tweeted. “I have watched her violence, craziness and, most importantly, WORDS, for far too long. Now tears? She hates Israel and all Jewish people. She is an anti-Semite. She and her 3 friends are the new face of the Democrat Party. Live with it!”

Trump was referring to the four minority congresswomen known on Capitol Hill as “the Squad.”

Since last month, Trump has repeatedly taken aim at the four freshman lawmakers, including in a tweet in which he said they should “go back” to the “totally broken and crime infested places from which they came.” Only one of the four, Rep. Ilhan Omar, D-Minn., was born outside the United States, and she became a U.S. citizen in 2000.

Last week, Israel announced that it was banning Tlaib and Omar from entering the country on a planned trip, the bulk of which was to be centered in the Palestinian territories and in eastern Yerushalayim.

Israel relented Friday on humanitarian grounds in response to a request from Tlaib to see her 90-year-old grandmother. Tlaib announced later that day that she would not make the trip after all.

At Monday’s news conference, where she appeared alongside Omar, Tlaib explained her reasoning.

“My grandmother said . . . I’m her bird. She said I’m her dream manifested,” Tlaib said as she started to cry. “I’m her free bird, so why would I come back and be caged and bow down when my election rose her head up high, gave her dignity for the first time?”

Israel’s initial decision to deny entry to Tlaib and Omar followed a tweet by Trump last week that said approving the visit would “show great weakness” on Israel’s part.

Both women have long been fierce critics of Israel and its treatment of Palestinians. They support the Boycott, Divestment and Sanctions movement, a global protest of Israel known as BDS.

Israeli law bars visitors who support the boycott from entering, one of the prime reasons Israeli officials cited for stopping the two congresswomen from visiting Israel and the neighboring Palestinian territories.

Meanwhile on Tuesday, a senior Israeli official quoted by the Times of Israel said that Netanyahu had no regrets over the decision to bar Tlaib and Omar, despite the widespread criticism from Democrats and some pro-Israel groups including AIPAC.

Some Israeli media reports suggested that Netanyahu had come under pressure from Trump to revoke an earlier decision to allow the congresswomen into the country.

The official said Israel would not necessarily bar any U.S. legislator who supports the Boycott, Divestment and Sanctions (BDS) movement against Israel, as the 2017 law allowing BDS supporters to be banned from the country only applies to those who “lead” or “promote” such boycotts.

Tlaib and Omar, however, are “leading spokespeople” for BDS, the official said.