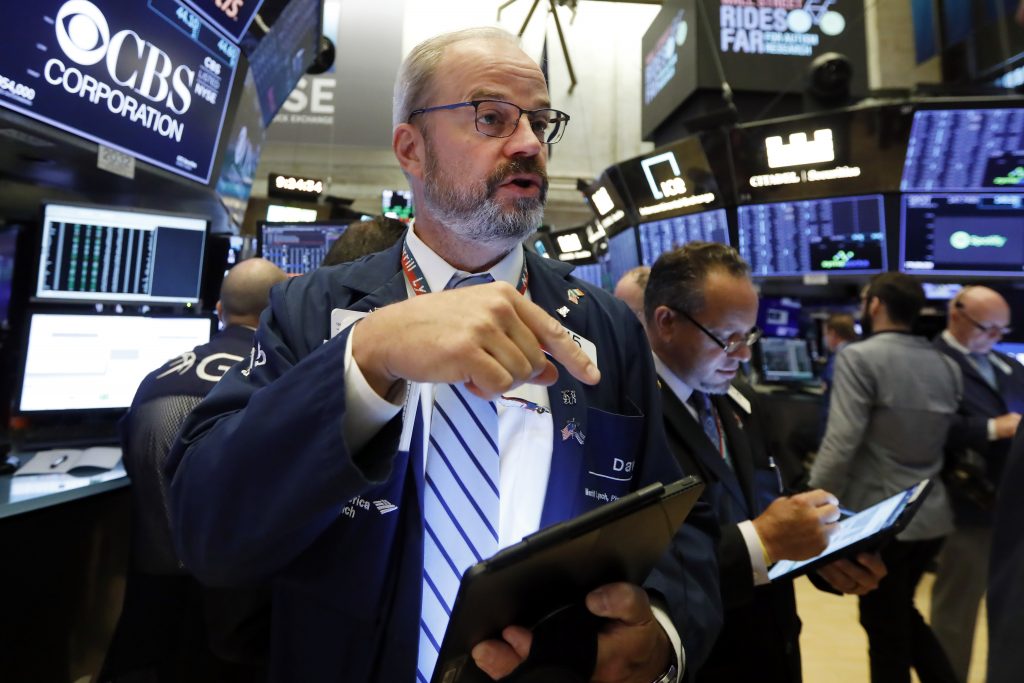 Technology stocks accounted for a big share of the move higher after the U.S. gave Chinese telecom giant Huawei another 90 days to buy equipment from American suppliers. Chipmaker Nvidia rose 6%.

The rise in bond yields is a reversal from much of August, when the escalating trade war between the U.S. and China prompted investors to seek the safety of U.S. government bonds, sending yields sharply lower. The yield on the 10-year Treasury note climbed to 1.58% from 1.54% late Friday.

Big department store chains also rose, recovering some of the ground lost last week after Macy’s slashed its profit forecast for the year. Nordstrom gained 3.3%, Gap added 4.2% and Kohl’s picked up 5%. Macy’s was up 1.7%.

Stocks are coming off their third weekly loss in a row as investors try to parse conflicting signals on the U.S. economy and determine whether a recession is on the horizon.

Last week, many stock indexes around the world struck their lowest levels this year, before a late rally suggested some calm was returning to the markets in what is a traditionally low-volume time of the year. Analysts say the concerns that drove last week’s sell-off could resurface at any time.

“Markets actually ended last week on a relatively good note, so what we may actually be witnessing right now is traders relishing the blissful trade war silence rather than anything more optimistic,” said Craig Erlam, senior market analyst at OANDA.

CONFLICTING SIGNALS: The steadier mood was evident in the fact that markets appeared to shrug off a report showing that one-third of economists surveyed by the National Association for Business Economics said they believe a slowing U.S. economy will tip into recession in 2021. That’s up from 25% in the equivalent survey taken in February.

President Donald Trump spent a good portion of the last week tweeting about the U.S. economy from his New Jersey golf club, trying to allay concerns of recession and offering an optimistic outlook for the economy after last week’s steep drop in the financial markets.

“I don’t think we’re having a recession,” President Trump told reporters Sunday as he returned to Washington from his New Jersey golf club.

TRADE WAR: Investors are weighing how much of an impact the trade conflict between Washington and Beijing will have on global economies, some of which are already showing signs of slowing.

Earlier this month, Trump announced plans to extend tariffs across virtually all Chinese imports, many of them consumer products that were exempt from early rounds of tariffs. The tariffs have been delayed, but ultimately will raise costs for U.S. companies bringing goods in from China.

FRUITFUL CHAT? Apple shares rose 2.7% on news that CEO Tim Cook met with President Donald Trump over the weekend and discussed how U.S. tariffs on goods imported from China are making it tougher for the iPhone maker to compete with rival Samsung.

Apple has manufacturing facilities in China, while Samsung builds its products mainly in South Korea.

“I thought he made a very compelling argument, so I’m thinking about it,” Trump told reporters.

WILDFIRE FALLOUT: PG&E sank 27% after a court ruled that the utility company will have to face a jury trial to determine whether it is liable for a deadly wildfire in 2017.