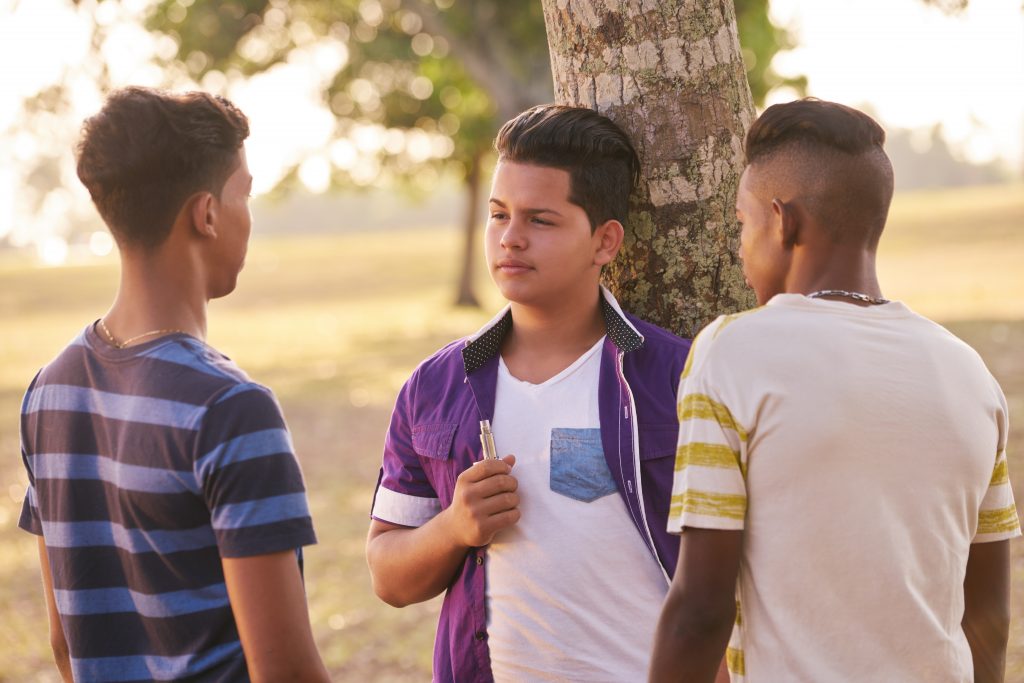 E-cigarette maker Juul Labs and Philip Morris USA were sued for illegally marketing nicotine-delivery devices to minors and deceiving consumers about the risks of vaping.

The lawsuit was filed on behalf of Christian Foss, 19, who says he became addicted to nicotine and suffered worsening asthma symptoms after he began using Juul’s device at 16, and seeks to represent all Illinois minors who used it. It alleges that Juul and Philip Morris violated the Racketeer Influenced and Corrupt Organizations Act, adopting the tobacco industry’s past use of catchy ad campaigns aimed at children. The Justice Department invoked RICO to sue the industry two decades ago.

“Mimicking Big Tobacco’s past marketing practices, defendants prey on youth for financial gain,” according to the lawsuit, filed Monday in federal court in Chicago. Philip Morris is a unit of Altria Group Inc., which is also named as a defendant and which recently bought a 35% stake in Juul for $12.8 billion.

Juul didn’t immediately respond to an email seeking comment on the lawsuit.

One of Silicon Valley’s most valuable privately held companies, Juul is facing increased pressure over its sleek vape pen’s popularity with underage users. It has tried to crack down on teen use, including improving its online age-verification process, deleting social media posts glamorizing vaping, and stopping the sale of some fruit- and dessert-flavored products in retail stores.

On its website Juul says it is “committed to improving the lives of the world’s one billion adult smokers by eliminating cigarettes,” that “we don’t want anyone who doesn’t smoke, or already use nicotine, to use Juul products” and “certainly don’t want youth using the product.”

Still, Juul’s pen remains popular with young people, and the company has been a central figure in an investigation into youth e-cigarette use by a panel of the U.S. House Oversight and Reform Committee. Among the concessions made by the tobacco industry in its own, massive settlement was not to market its product to children and teens.

The U.S. Surgeon General has called vaping an “epidemic.” The Food and Drug Administration has been investigating the safety of e-cigarettes and Juul’s marketing practices. The Centers for Disease Control and Prevention said Saturday it is looking into a cluster of 94 possible cases of severe lung illness associated with vaping in 14 states between June 28 and Aug. 15, and is consulting with health departments in Illinois, Wisconsin, California, Indiana and Minnesota.

Foss’s isn’t the first such suit filed against Juul. Among the most recent litigation, the Lake County State’s Attorney’s Office in Illinois sued Juul last week, accusing it of using deceptive marketing and targeting teenagers. Also last week, a woman filed a federal suit in Charleston, West Virginia, on behalf of her child, that lays out a history of e-cigarettes and their alleged marketing to children.

Electronic cigarettes typically consist of cartridges of liquid nicotine heated by a battery to create a cloud of vapor that looks like smoke and that the user inhales. The cartridges come in flavors including mango, mint and creme brulee.

Foss alleges that liquid-nicotine salts in Juul’s e-cigarettes contain dangerous toxins and 30% more nicotine per puff than conventional cigarettes, and that Juul concealed how addictive nicotine is. He is seeking to recover unspecified sums in compensatory and punitive damages and to require medical testing and monitoring of Juul’s products as well as an order that the company stop behaving negligently and deceptively.

“Juul adopted the same themes used by Philip Morris and other Big Tobacco companies in the cigarette industry’s long-standing, extensive advertising campaign to glamorize cigarette smoking while downplaying its addictiveness and deleterious health effects,” according to the suit. Juul uses “youth-oriented” imagery in conventional and social media marketing campaigns, Foss claims, depicting the devices and those who use them as cool.