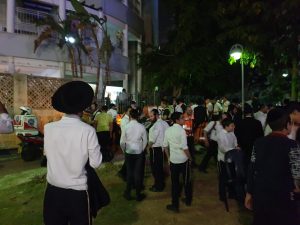 An explosion was reported on Sunday evening in a building on Baal Hatanya Street in Bnei Brak, apparently caused by a bomb.

Police at the scene investigating the cause of the explosion said they found a homemade explosive device in the stairwell. Meanwhile, the public was asked to avoid the area.