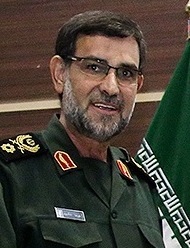 The presence of America and Britain in the Gulf region brings insecurity, the head of the Iranian Revolutionary Guards Navy, Alireza Tangsiri, was reported as saying by the ILNA news agency.

Tensions have spiked between Iran and the U.S. and Britain in the Gulf after the Islamic Republic shot down an American drone in June and seized a British tanker last month for violating maritime regulations.

“The presence of America and England in this region means insecurity,” he said.

Iran can provide security in the Gulf by forming a coalition with other countries in the region, Tangsiri said.

Tangsiri said that Iran wants peace and stability in the Gulf but appeared to issue a veiled threat by saying that if a ship that uses nuclear fuel were to be targeted in the Gulf, the countries in the south of the region will not have drinking water because of contamination, Mehr news agency reported.