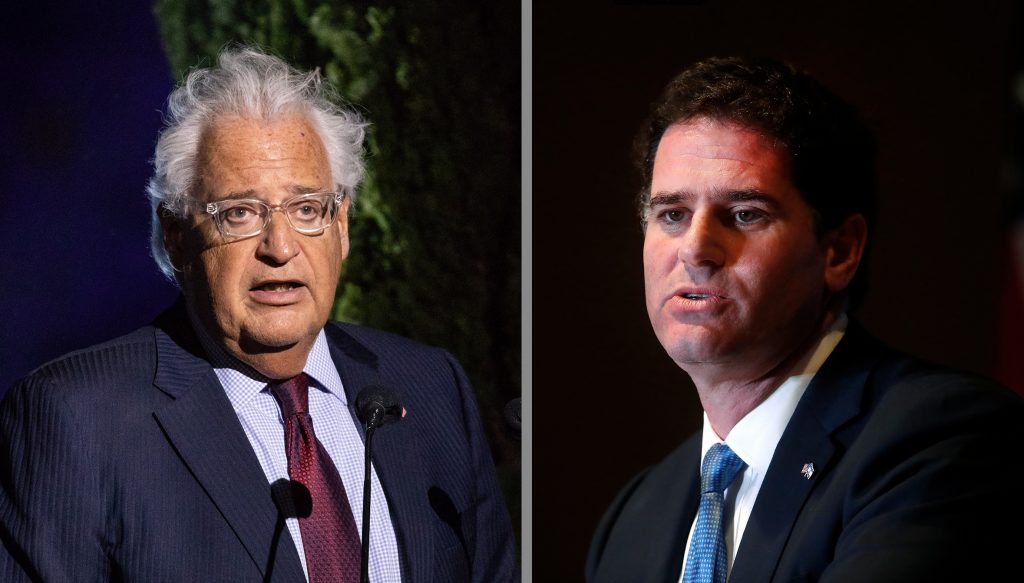 Senior Democratic members of Congress are considering action against top emissaries of the Israeli government and the Trump administration for their roles in Israel’s decision to bar two House members from entering the country.

About a dozen lawmakers began discussions on Friday morning over ways to communicate a “deep lack of confidence and trust” in Israel’s ambassador to Washington, Ron Dermer, and the U.S. ambassador to Israel, David Friedman, according to two sources familiar with the discussions. The group is weighing issuing a statement of no-confidence in Dermer and opening an inspector general investigation into Friedman’s conduct.

Israel banned Reps. Rashida Tlaib of Michigan and Ilhan Omar of Minnesota from a planned visit to Israel and the West Bank this weekend, provoking outrage among Democrats and some Republicans, including some who have harshly criticized the two lawmakers on policy grounds.

“We are reviewing all of our options,” a senior congressional source told McClatchy. “With Dermer, the issue is that there already was a severe lack of trust. But now there is a severe lack of confidence. It is completely unclear that he represents his government given he has made promises that he has not kept and wasn’t clear if he ever had any chance of keeping.”

In a statement, Hoyer referred to Israel’s decision on Tlaib and Omar as “deeply disappointing,” “disrespectful,” “unacceptable” and a “self-inflicted wound” on the U.S.-Israel alliance.

Dermer had assured Hoyer in recent weeks that “out of respect for the U.S. Congress and the great alliance between Israel and America, we would not deny entry to any Member of Congress into Israel.”

But the Israeli government ultimately banned Tlaib and Omar. Earlier, President Donald Trump had tweeted: “It would show great weakness if Israel allowed Rep. Omar and Rep. Tlaib to visit … They are a disgrace!” Many believe Israel’s decision was influenced by Trump’s tweet, but senior Israeli officials said they had reversed course because the real reason for the visit had only gradually emerged.

Netanyahu said in a statement that Omar and Tlaib’s trip itinerary, which was received by Israel just a few days ago, “clarified that they planned a visit whose sole purpose was to support boycotts and deny Israel’s legitimacy. For example, they called their destination ‘Palestine’ and not ‘Israel,’ and unlike all Democratic and Republican members of Congress before them, they did not seek any meeting with any Israeli official, whether government or opposition.”

Netanyahu also defended Dermer on Sunday, saying that the ambassador was correct at the time, given the Israeli policy of honoring the requests of U.S. elected officials to enter the country, but that a subsequent review of their itinerary and the organizers of their trip indicated that the visit would be harmful to Israel.

Many Democrats have viewed Dermer skeptically since 2015, when the top Netanyahu confidante orchestrated the prime minister’s controversial address to Congress targeting then-President Barack Obama’s nuclear talks with Iran. In a rare move, Netanyahu requested last month to extend Dermer’s term for a third time because of his close ties with his office and the Trump administration.

Adding to their concern over Dermer’s handling of the congresswomen’s visit, Democrats were further angered after the Israelis released Omar and Tlaib’s planned itinerary and a letter from Tlaib in a public justification of the move. That action raised concerns over whether U.S. lawmakers can trust that their communications with Israel’s embassy will remain private going forward.

“Dermer is saying privately that he expects this to go away within a day – it’s a real lack of understanding on the consequences of this,” one congressional source said.

The group of Democrats is also considering action against Trump’s ambassador to Israel, who issued a public statement defending Israel’s decision on Thursday, citing the country’s laws against the Boycott, Divestment and Sanctions (BDS) movement, which Omar and Tlaib support.

In the morning talks, lawmakers recalled a 1975 incident in which Henry Waxman, a longtime Democratic congressman from California, was banned from Saudi Arabia after listing his Jewish background on his visa application. The State Department intervened at that time in order to ensure that all members of Congress could conduct business on behalf of the government, and Waxman was allowed in.

Friedman is breaking with that precedent, they argue, by failing to stand up for members of Congress.

The group of Democratic lawmakers may call for a formal inspector general investigation “into the role the ambassador played in barring them from entering the country,” another congressional source said.