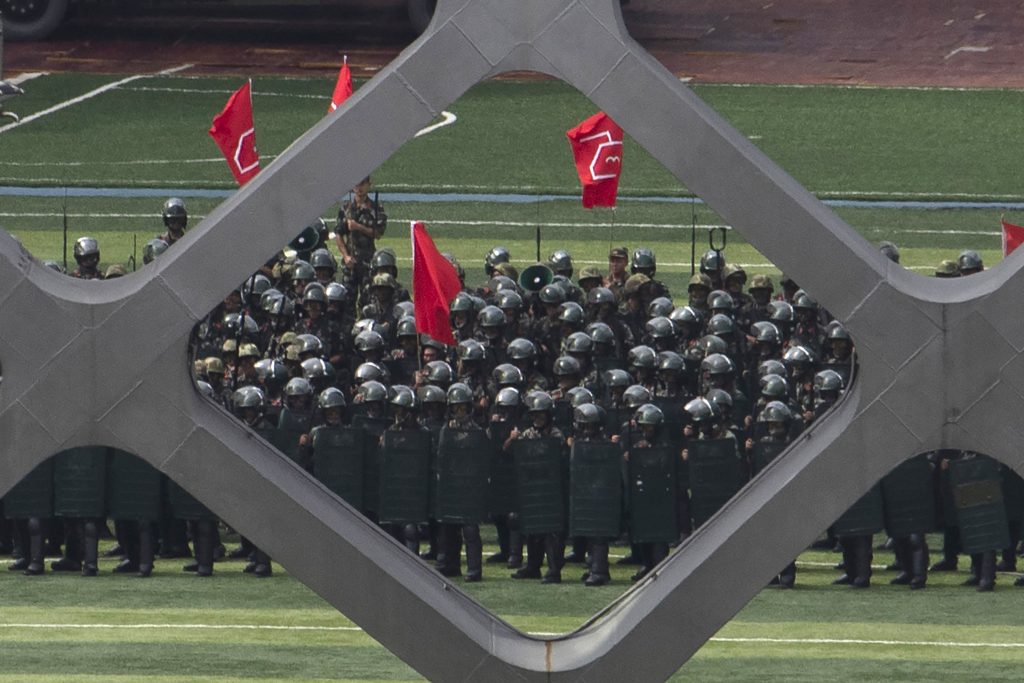 Hong Kong braced for a major anti-government rally planned for Sunday after an unusually calm Saturday night in what has been a summer of violent protests in the Asian financial hub.

Demonstrations have lost some intensity since the ugly scenes witnessed during the protesters’ occupation of the city’s airport earlier in the past week, and Sunday’s rally could show whether the movement still has broad-based support.

No tear gas was fired on Saturday night during a brief standoff between police and protesters outside a police station in the Mong Kok district – which was noteworthy after the increasingly violent confrontations in the last 11 weeks. Police said they fired one beanbag round.

Some protesters said on Saturday that they were saving their energy for Sunday, when the pro-democracy Civil Human Rights Front, which organized million-strong peaceful marches in June, has scheduled a rally in Victoria Park, in the bustling shopping district of Causeway Bay on Hong Kong island.

Anger over a now-suspended bill that would allow criminal suspects in Hong Kong to be extradited to mainland China erupted in June, but the rising unrest is fueled by broader concerns about the erosion of freedoms guaranteed under the “one country, two systems” formula put in place after Hong Kong’s return from British to Chinese rule in 1997.

Demands include democratic reforms as well as the resignation of the city’s Beijing-backed leader, Carrie Lam.

The protests present one of the biggest challenges facing Chinese President Xi Jinping since he came to power in 2012. And with the ruling Communist Party preparing to mark the 70th anniversary of the founding of the People’s Republic on Oct 1, the crisis in Hong Kong has come at a sensitive time.

Beijing has adopted an increasingly strident rhetorical stance towards the protesters, accusing foreign countries including the United States of fomenting unrest.

Scenes of Chinese paramilitary troops training at a stadium in the city of Shenzhen, which borders Hong Kong, gave a clear warning that mainland intervention by force is possible.

On Saturday, thousands of school teachers joined anti-government protests. A much-larger demonstration in support of the government attracted what organizers said was 476,000 people, although police said 108,000 attended.

Last week, protesters who occupied the terminal at Hong Kong’s airport forced the cancellation of nearly 1,000 flights and detained two men they thought were pro-government sympathizers, prompting Beijing to liken the behavior to terrorism and leading some protesters to apologize.

On Friday, the CEO of Cathay Pacific Airways resigned amid mounting Chinese regulatory scrutiny of the Hong Kong carrier over the involvement of its employees in the protests.

On Sunday, Cathay’s flight attendants union posted a statement expressing sadness over the exits of CEO Rupert Hogg and Chief Operating Office Paul Loo, and urged members to be cautious in their actions and words and to be wary that their electronic devices could be inspected at some airports.

“You are advised to be well prepared to avoid undesirable consequences,” the social media posting said.

A Cathay spokesman said staff had not been requested to remove images of the protests from their phones or other electronic devices.