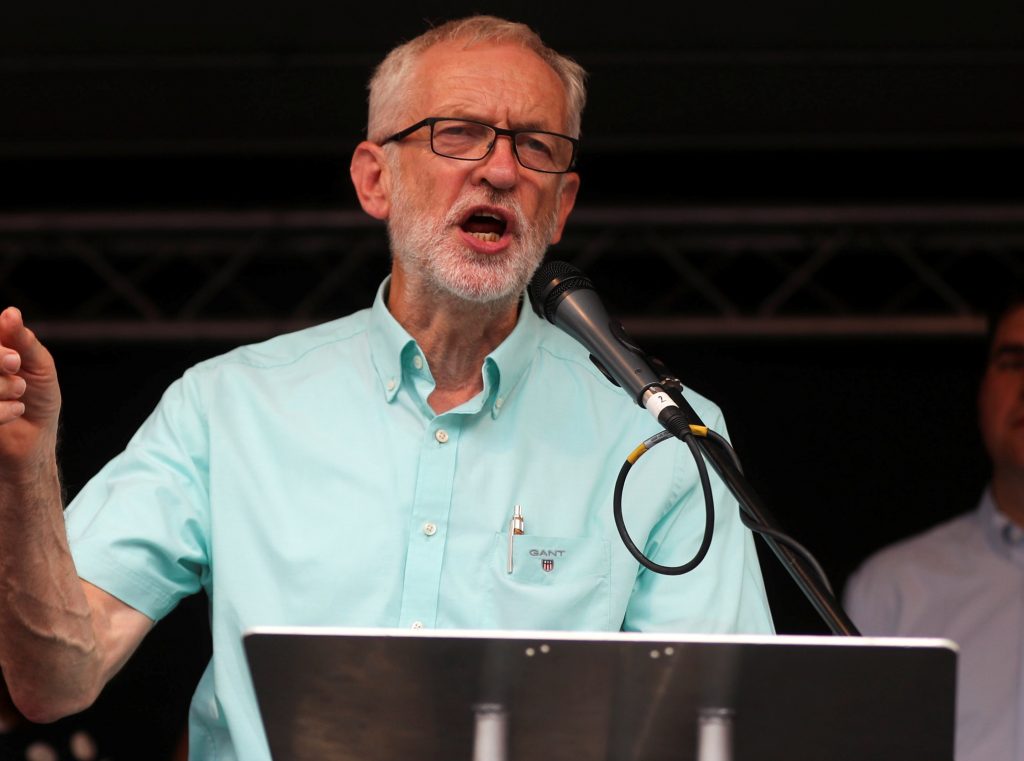 Opposition parties launched rival campaigns to topple Prime Minister Boris Johnson and stop him taking Britain out of the European Union without a deal, illustrating fractures in the anti-Brexit movement that make neither scheme likely to succeed.

Johnson has promised to push through Brexit by Oct. 31, with or without a deal, setting the scene for a showdown in parliament where a majority of lawmakers are opposed to an EU divorce without a transition agreement.

With parliament the main obstacle to Johnson’s “do or die” pledge, lawmakers are urgently seeking a way to remove him or change the law to delay Brexit.

Jeremy Corbyn, the veteran socialist leader of the Labor Party, said lawmakers should support a vote of no confidence and back him to lead a “strictly time-limited temporary government” that would postpone Brexit and hold an election.

A handful of lawmakers from Johnson’s own Conservative Party said they would listen to Corbyn’s proposals.

“A short-term Jeremy Corbyn government is less damaging than the generational damage that would be caused by a no-deal Brexit,” Conservative lawmaker Guto Bebb told the BBC.

The leader of the Scottish National Party, Nicola Sturgeon, said her party and its 35 lawmakers would explore any option to stop Brexit in parliament and did not rule out backing Corbyn.

However, his chances of success were crippled by the leader of the anti-Brexit Liberal Democrat party, Jo Swinson, who said Corbyn was not the right figurehead for an emergency government.

“We are facing a national crisis. We may need an emergency government to resolve it but if Jeremy Corbyn truly wants that to succeed, surely even he can see, he cannot lead it,” she said.

Swinson’s rival idea for a senior parliamentarian to lead a national unity government is unlikely to be accepted by Corbyn.

Britain’s electoral law lets another party try to form government within 14 days of a successful no-confidence vote, but only if they have a majority in the 650-seat parliament.

Johnson has a working majority in parliament of just one seat, including several lawmakers who have said they could vote to bring down the government.

However, without the Liberal Democrats’ 14 votes, Corbyn’s plan is unlikely to succeed. And without the support of Corbyn and his sizeable circle of committed supporters, any other plan also has little chance.

A spokeswoman for Johnson’s office said the Labour leader was showing contempt for the 2016 referendum. “Jeremy Corbyn believes that the people are the servants and politicians can cancel public votes they don’t like,” she said.

Lawmakers return from their summer break on Sept. 3 for a battle over Brexit that will determine the fortunes of the world’s fifth-largest economy. Labour’s business spokeswoman said a challenge in parliament could come days later.

Johnson, who led the 2016 campaign to leave the EU, has staked his premiership on getting Britain out by Oct. 31 and accused some lawmakers of “collaborating” with Brussels.

Opponents of a sudden departure without a deal say it would be a disaster for what was one of the West’s most stable democracies, shattering supply chains, damaging global growth, and weakening Britain’s standing in the world.

Brexit supporters say while there may be short-term disruption, it would provide a clean break from the struggling bloc and eventually allow the economy to thrive. The pound, which tumbled in recent weeks on the prospect of a turbulent exit, was largely unmoved by Corbyn’s and Swinson’s proposals.

Corbyn, a low-key Remain campaigner during the 2016 referendum, has been under pressure within his party to step up efforts to prevent it from happening.

He said he hoped his proposal to lead a caretaker government could “halt the serious threat of No Deal, end the uncertainty and disarray, and allow the public to decide the best way ahead.”

But he is a divisive figure and even his own party, which has faced accusations of anti-Semitism under his leadership, would struggle to form a majority of his own.

While the political turmoil has led to an unprecedented level of cross-party cooperation, many in Johnson’s Conservative Party and others would still find it difficult to vote for a Corbyn-led administration.

Conservative lawmaker Alistair Burt, a former foreign office minister who is opposed to a no-deal Brexit, said he could not support the Labor leader.