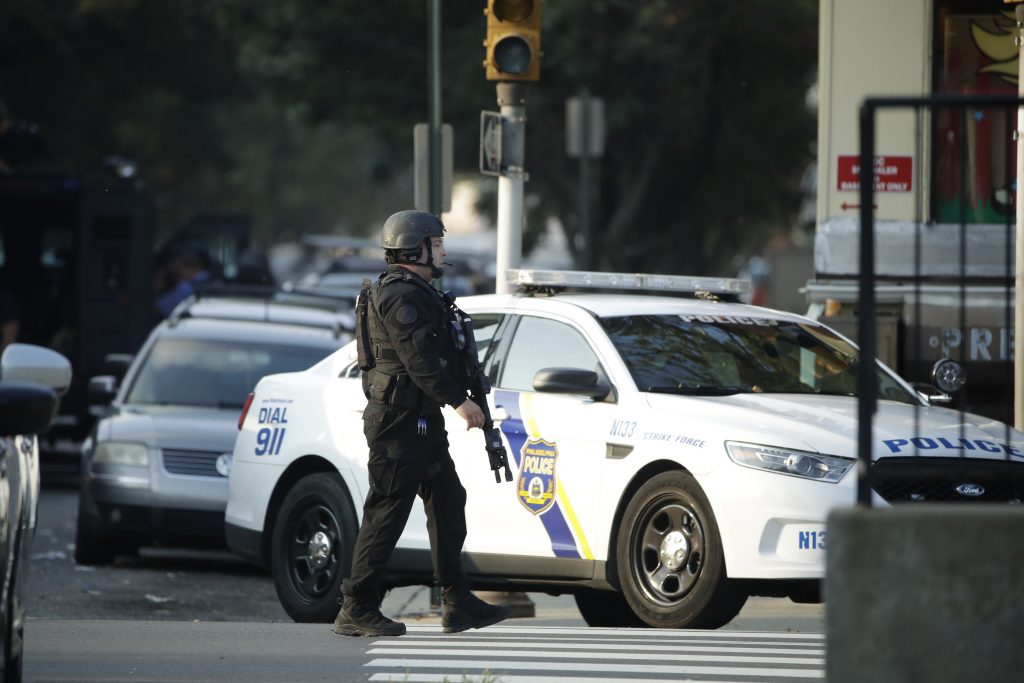 A SWAT team rescued two police officers trapped inside a Philadelphia house with an active gunman after a shootout that wounded six officers, police said on Wednesday.

The gunman remained barricaded inside the house with police urging him to surrender. The SWAT team also evacuated suspects who police had arrested during the raid, and who were then also trapped in the home, police said.

The SWAT team moved in about five hours into the standoff that began after the man opened fire on officers as they served a drugs warrant in the north Philadelphia home.

“The officers and additional prisoners that were inside of the house with the shooter were safely evacuated. The shooter remains armed inside,” Philadelphia Police Department Commissioner Richard Ross tweeted.

All the wounded officers were in stable condition with non-life-threatening injuries, with television images showing several of them leaving hospital on Wednesday night, one with a bandaged head and arm.

“Many of them had to escape through windows and doors to escape from a barrage of bullets,” Ross told a news conference.

The shooter continued to fire on a SWAT truck parked outside the residence in the Nicetown-Tioga neighborhood, with rounds hitting a building across the street, as officers tried to negotiate his surrender, Ross said.

Police called the man’s phone, talked with him on a bullhorn and involved a family member in the negotiations, Ross added.

“We are trying to get him to come out peacefully,” Ross said.

Ross said the trapped officers inside the home were holding people they arrested during the raid. The officers and suspects were pulled out of the home safely, Ross said.

Police told local residents to remain inside their homes and stay out of the area after hundreds of rounds were exchanged.

There were reports the shooter was livestreaming the incident on Facebook.

President Donald Trump has been briefed on the shooting and was monitoring the situation, the White House said.

Local media reported the shooter appeared to have a high-powered weapon and a significant amount of ammunition. The incident follows a string of mass shootings in California, Texas and Ohio in which gunmen used semi-automatic rifles.

“I’m a little bit angry about someone having all that weaponry and all that firepower, but we’ll get to that another day,” said Philadelphia Mayor Jim Kenney after visiting three of the wounded officers in hospital.