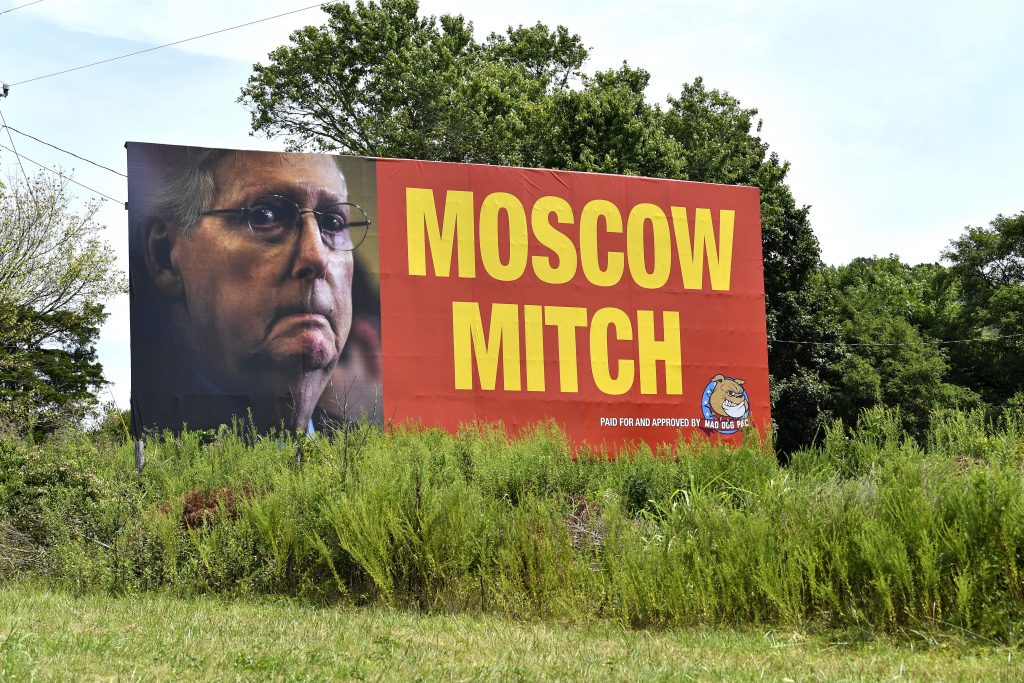 House Speaker Nancy Pelosi referred to Senate Majority Leader Mitch McConnell as “Moscow Mitch” during a political speech in Illinois on Wednesday as she chided the Kentucky Republican for blocking an array of legislation passed by her chamber this year.

Speaking at a Democratic event in Springfield, Pelosi, D-Calif., recounted a series of bills passed by the House, including measures raising the minimum wage, reforming elections and expanding health care.

McConnell has used the term “grim reaper” to describe his role in killing what he has characterized as far-left legislation coming over from the Democrat-led House.

McConnell, meanwhile, has chafed at the growing use of the nickname “Moscow Mitch,” which was coined by MSNBC host Joe Scarborough in response to McConnell blocking House bills last month aimed at preventing foreign interference in U.S. elections.

McConnell described those bills as “partisan” as Senate Democrats sought to pass them by unanimous consent shortly after special counsel Robert Mueller testified that Russia was laying the groundwork to interfere in the 2020 election “as we sit here.”

Asked Wednesday for comment on Pelosi’s use of “Moscow Mitch,” an aide pointed to McConnell’s comments on the Senate floor in response to Scarborough and Washington Post columnist Dana Milbank, who referred to McConnell as a “Russian asset” around the same time.

“I don’t normally take the time to respond to critics in the media when they have no clue what they’re talking about, but this modern-day McCarthyism is toxic and damaging because of the way it warps our entire public discourse,” McConnell said during a speech in which he also defended his record of standing up to Russia.

During her remarks at the event sponsored by the Illinois Democratic County Chairs’ Association, Pelosi also urged the Senate to pass a pair of bills approved by the House in February designed to strengthen background checks for gun buyers.

“We’ve been waiting since February, and now public sentiment must weigh in to save lives,” Pelosi said.

Trump had previously threatened to veto the bills, but he has expressed interest in legislation strengthening background checks in the aftermath of the mass shootings in El Paso and Dayton, Ohio.

McConnell has not endorsed any specific legislation but said recently that his chamber would discuss background checks and “red-flag” legislation upon returning from the August recess. Red flag legislation makes it easier for authorities to confiscate guns of those deemed a risk to others or themselves.

In her remarks, Pelosi did not mention Trump by name but referred to him as “the person down the street.”

She accused Trump of undermining the Constitution and referenced ongoing House investigations into possible obstruction of Mueller’s probe into 2016 election interference and other matters.

“No one is above the law. We all must be held accountable for our actions,” Pelosi said.

Speaking of Trump, she also said the United States is “a nation of immigrants . . . which he disrespects as well.”

Speaking to reporters later, Pelosi touted the diversity of the Democratic caucus and described her party’s lawmakers as “uniters.”

“We are not dividers, which is what we are up against,” Pelosi said.