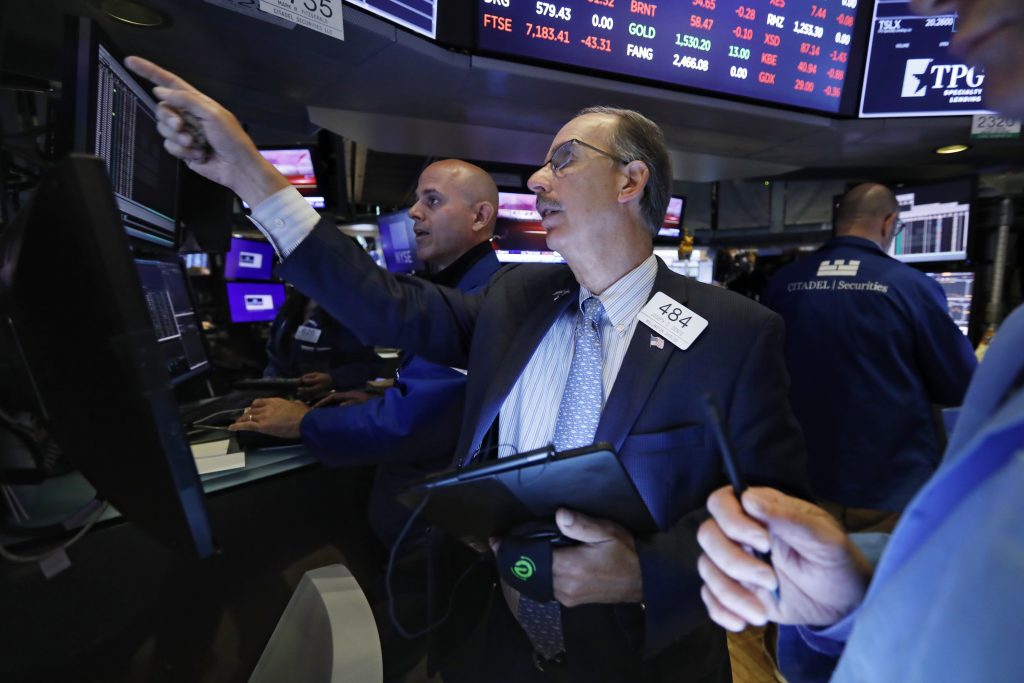 And back up goes the stock market.

Investors flipped back into buying mode Tuesday after the U.S. said it would hold off on tariffs of Chinese imports of mobile phones, toys and several other items typically on end of year shopping lists. China also said the two sides held discussions on trade overnight and would talk again the next two weeks.

The markets have been in the spin cycle since President Donald Trump announced on Aug. 1 that he would impose 10% tariffs on about $300 billion in Chinese imports, which would be on top of 25% tariffs already in place on $250 billion of imports. The threat dashed hopes that a resolution may come soon in the trade war between the world’s two largest economies, and investors have grown increasingly concerned that it may drag on through the U.S. elections in 2020.

On Tuesday, The Office of the U.S. Trade Representative said it would delay the tariffs on some products, including popular consumer goods, until Dec. 15. A few other products were removed altogether, including certain types of fish and baby seats.

“Maybe today is a little bit too exaggerated because it was a little glimmer of hope about tariffs,” said Karyn Cavanaugh, senior markets strategist at Voya Investment Management. “However, the drama with China and trade is not over.”

While stocks rallied Tuesday, there are still signs of investor caution. Treasury yields have sunk, and gold prices have jumped as investors searched for safety on worries the trade war could knock the U.S. economy back into recession for the first time in a decade. The yield on the 10-year Treasury rose Tuesday, but it remains below its level when Trump’s 2016 election invigorated markets. Gold fell just 0.2% and remains near a six-year high.

Retailers were some of Tuesday’s best performers because the delay in tariffs means they won’t have to raise prices on toys, clothing and other items during the end of year shopping season, the most important months of the year for the industry. Best Buy jumped 6.7%, one of the biggest gains in the S&P 500, and Dollar Tree rose 3.7% for its best day since March.

“This is a huge relief for retailers for the holiday 2019 season, but the larger issue isn’t over,” said Ken Perkins, president of RetailMetrics, a retail research firm. “Retailers better be planning to diversify their sourcing even though they’re getting some short-term relief.”

Other companies that have a lot riding on strong seasonal sales, as well as a dependence on China for producing their goods, were also among the market’s leaders. Hasbro gained 3%, Micron Technology jumped 4.9% and Apple climbed 4.4%.

Meanwhile, shares in CBS and Viacom rose after the companies announced they have reached a deal to combine into one company named ViacomCBS. The long-anticipated combination brings together the networks and the Paramount studio as traditional media giants bulk up to challenge streaming companies like Netflix. CBS gained 1.4% and Viacom rose 1.7%.

Bonds fell and the yield on the two-year Treasury jumped, partially due to the trade-war developments and partially because inflation was higher than economists expected last month. The inflation report may give the Federal Reserve less leeway to cut interest rates to help the economy.

The 10-year Treasury yield, meanwhile, rose by a smaller margin, to 1.68% from 1.64% late Monday. That leaves the 10-year Treasury yielding just 0.02 percentage points more than a two-year Treasury. When that difference goes negative, investors see it as a warning signal that a recession may be coming. And the gap is now close to its lowest level since the summer of 2007, about six months before the Great Recession struck.

Stock markets overseas turned higher following the U.S. and Chinese announcements on trade. The French CAC 40 jumped 1% after being down for most of the day. The German DAX rose 0.6%, and the FTSE 100 in London added 0.3%.

Asian markets had already closed before the announcements, and Japan’s Nikkei 225 index dropped 1.1%. The Hang Seng lost 2.1% in Hong Kong, where pro-democracy protests crippled Hong Kong’s airport for a second day. The Chinese government cast an ominous shadow over the growing protests by calling them “sprouts of terrorism” and raised concerns over how it may respond.