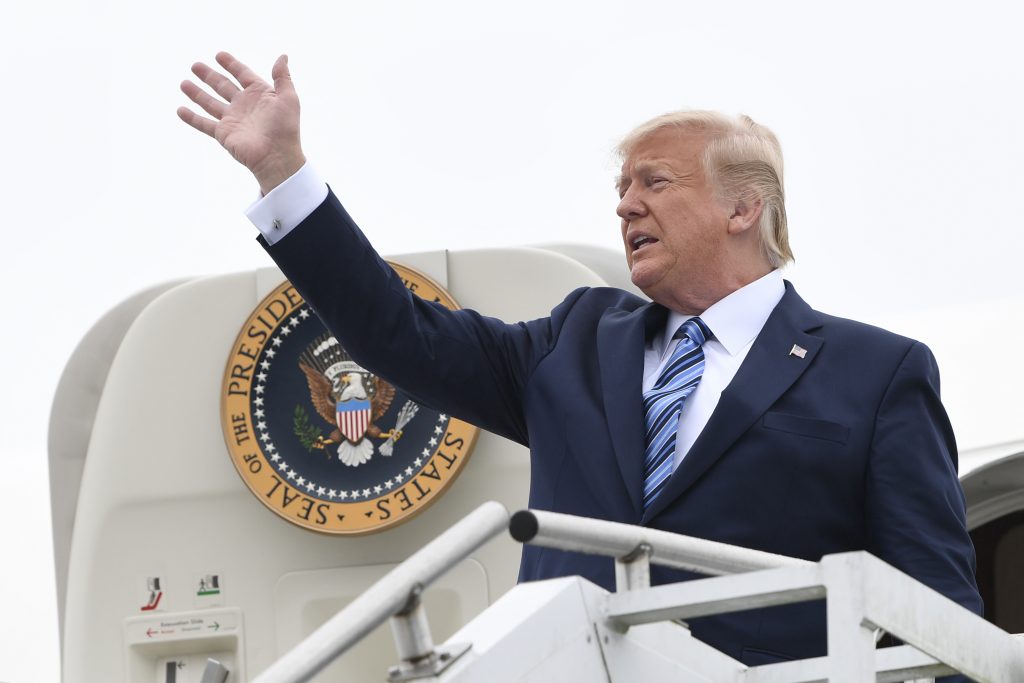 Responding to pressure from businesses and growing fears that a trade war is threatening the U.S. economy, the Trump administration is delaying some import taxes it planned to impose on Chinese goods and is dropping others altogether.

The announcement Tuesday from the Office of the U.S. Trade Representative was greeted with relief on Wall Street and by retailers who have grown fearful that the new tariffs would wreck end-of-year shopping season sales.

The administration says it still plans to proceed with 10% tariffs on about $300 billion in Chinese imports — extending its import taxes on just about everything China ships to the United States, in a dispute over Beijing’s strong-arm trade policies. Most of the new tariffs are scheduled to kick in Sept. 1.

But under pressure from retailers and other businesses, President Donald Trump’s trade office said it would delay until Dec. 15 the 10% tariffs on some Chinese imports, including such popular consumer goods as cellphones, laptops, video game consoles, some toys, computer monitors, shoes and clothing.

The administration is also removing other items from the tariff list entirely, based on what it called “health, safety, national security and other factors.”

The news sent the Dow Jones Industrial Average soaring more than 400 points at midday. Shares of Apple, Mattel and shoe brand Steve Madden, which stand to benefit from the delayed tariffs, particularly shot up on the news.

The delay seemed timed to cushion, until after the end-of-year shopping season, the financial and perhaps political impact of escalating tariffs on consumer goods, which would likely force retailers to raise prices.

President Trump acknowledged as much in an exchange with reporters in New Jersey, saying he was delaying the tariffs so they wouldn’t affect the critically important end-of-year shopping season. He also noted that the stock market rallied on the news.

Hun Quach, vice president of international trade at the Retail Industry Leaders Association, welcomed the administration’s delay in the new tariffs on many consumer goods, saying it “will mitigate some pain for consumers through the [end-of-year] shopping season.”

Together, the news of negotiations and tariff delays provided at least a respite after weeks of heightened U.S.-China trade tensions. The relief might prove only temporary, though, if the tariffs eventually take full effect and Beijing retaliates against U.S. exports.

The Trump administration is fighting the Chinese regime over allegations that Beijing steals trade secrets, forces foreign companies to hand over technology and unfairly subsidizes its own firms. Those tactics are part of Beijing’s drive to become a world leader in such advanced technologies as artificial intelligence and electric cars.

But 12 rounds of talks have failed to produce any resolution. Frustrated with the lack of progress, Trump raised the tariffs on $200 billion in Chinese imports from 10% to 25% in May and said Aug. 1 that he’d impose 10% taxes on an additional $300 billion on Sept. 1.

On Sunday, economists at Goldman Sachs downgraded their economic forecasts, citing the impending tariffs on consumer goods. And economists at Bank of America Merrill Lynch have raised their odds of a recession in the next year to roughly 33%, up from about 20%.

“We are worried,” Michelle Meyer, head of economics at Bank of America Merrill Lynch, wrote Friday. “We now have a number of early indicators starting to signal heightened risk of recession.”

Goldman said the tariffs on China have increased uncertainty for businesses, which will likely cause them to pull back on hiring and investing in new equipment or software. President Trump’s tariffs on Chinese goods have also weighed down stock prices lower, which could depress spending by wealthier Americans, Goldman found.

“It’s pretty clear that the problem with (Trump’s) tariff tactics is it’s bad for the economy,” said David Dollar, a China specialist at the Brookings Institution and a former official at the World Bank and U.S. Treasury. “You try to use the weapon but then you get blowback on your own people.”

Despite the exchanges between the U.S. and Chinese negotiators, the prospects for negotiations remain dim. A substantive deal would require China to scale back its aspirations to become a tech superpower. And relations between the countries have been strained by mistrust.

The call “has the effect of creating a better environment. It sounds like they’re moving ahead and making plans to meet,” Dollar said.

Still, the best possible outcome, he said, would be a “mini-deal” in which China agrees to buy more American products and narrow the gaping U.S. trade deficit with China. In exchange, perhaps the United States would lift some sanctions on the Chinese telecommunications giant Huawei, which the U.S. sees as a national security risk.

So far, Trump’s tariffs have failed to get President Xi Jinping to yield to the U.S. demands on the thornier issues of intellectual property theft and coerced technology transfers. And the taxes on imports are increasingly drawing resistance in the United States.

“I don’t think we’re any closer to a deal,” said Scott Kennedy, who analyzes China’s economy at the Center for Strategic and International Studies. “I don’t think there will be any deal during the Trump administration.”

The decision to delay the tariffs “shows that the two economies are interdependent and that interdependence benefits many Americans” by providing affordable goods, Kennedy said. “It’s not so easy to penalize China or disengage.”