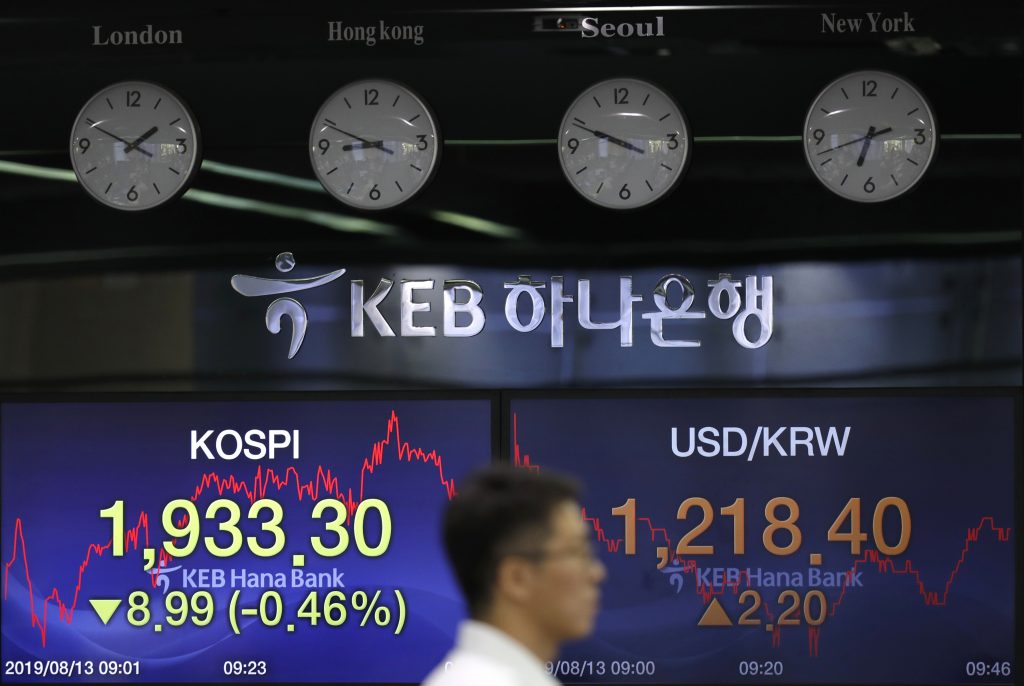 Benchmarks in Shanghai, Tokyo, Hong Kong and Sydney all retreated.

Investor anxiety has been fed by President Donald Trump’s threat of new U.S. tariff hikes on Chinese goods, protests in Hong Kong and weaker-than-expected data from India, Argentina and Singapore.

“The global economy is perched precariously, hoping for a positive inflection, but braced for a stumble,” said Vishnu Varathan of Mizuho Bank in a report.

Investors were rattled by a Chinese government statement Monday saying mostly nonviolent protests in Hong Kong were “beginning to show the sprouts of terrorism” and were an “existential threat” to the population.

Hong Kong’s airport, one of the world’s busiest, canceled all flights Monday evening after thousands of pro-democracy protesters crowded into its main terminal.

Beijing’s use of the term terrorism “triggered a wave of risk aversion across global markets,” said Stephen Innes of VM Markets in a report.

On Wall Street, the benchmark Standard & Poor’s 500 had its biggest decline in a week while the Dow Jones Industrial Average lost nearly 400 points.

Selling was widespread. Technology companies and banks accounted for a big share of the decline.

Trump has promised 10% tariffs on some $300 billion in Chinese imports that haven’t already been hit with tariffs of 25%. The new tariff would go into effect Sept. 1 and more directly affect U.S. consumers.

Last week, Trump said he’d be “fine” if the U.S. and China don’t go ahead with a meeting next month, dampening investors’ hopes for a resolution.