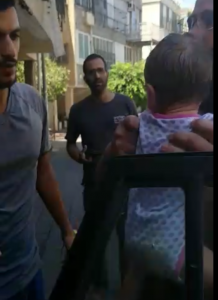 A year-old baby was rescued from a car in the 90-degree heat of Bnei Brak on Monday after being forgotten for over an hour in the vehicle.

A young man identified by witnesses as Ben Shmuel Cohen noticed the baby girl strapped into the parked car and no one around. He smashed through the front driver’s-side window with his hand, sustaining a light injury, and unlocked the car.

Video taken of the rescue shows Cohen removing the child, crying and covered in perspiration, as someone yells for water.

The baby was brought to a hospital. Channel 13 quoted a medic who said the baby was suffering from heatstroke and dehydration, but is expected to fully recover.

The hospital contacted the baby’s father, who thanked the passersby for saving his child.

The baby had been in the sweltering car for at least an hour, according to medical staff.

IDF Probe: No Connection Between Soldiers and Palestinian Boy’s Death