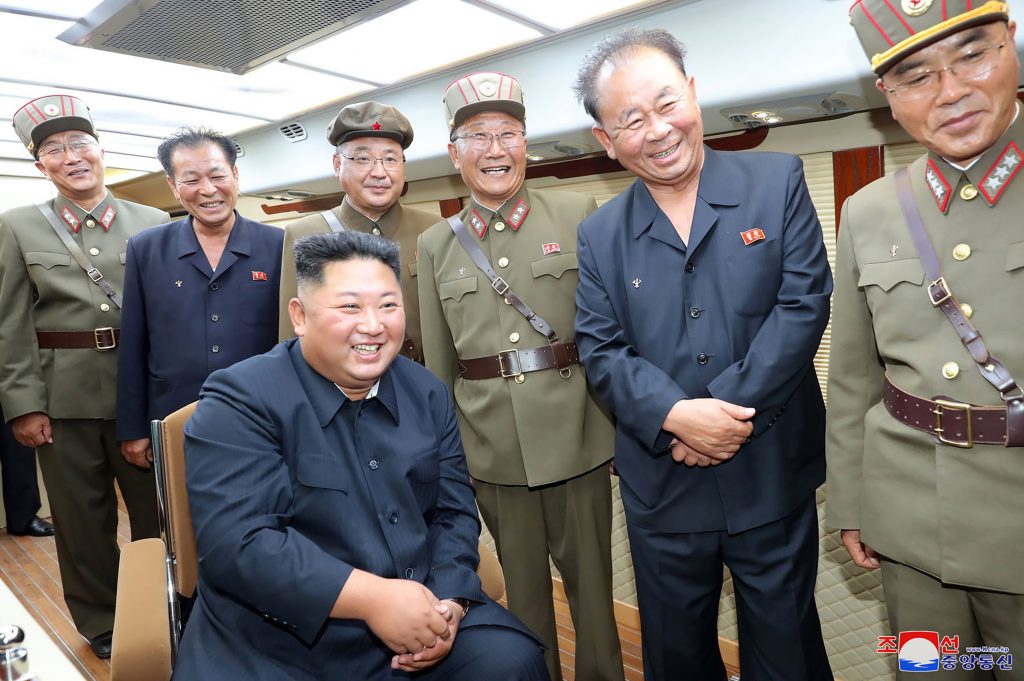 North Korea said Sunday that leader Kim Jong Un supervised test-firings of an unspecified new weapons system, which extended a streak of launches that are seen as an attempt to build leverage ahead of negotiations with the United States while driving a wedge between the U.S. and South Korea.

The report by North Korean state media came hours after President Donald Trump said that North Korean leader Kim Jong Un expressed a desire to meet again to start nuclear negotiations after the end of ongoing joint U.S.-South Korea military exercises, and that he apologized for the flurry of recent short-range ballistic launches that rattled U.S. allies in the region.

In a separate statement on Sunday, North Korea’s Foreign Ministry blasted South Korea for continuing to host military drills with the United States, and said that future dialogue will be held strictly between Pyongyang and Washington and not between the Koreas.

South Korea’s military said the North on Saturday fired what appeared to be two short-range ballistic missiles. It said they flew about 250 miles before landing in waters between the Korean Peninsula and Japan.

Kim expressed “great satisfaction” over the launches, which the North’s official Korean Central News Agency, or KCNA, said verified that the new weapons system is able to perform as designed. North Korea’s official Rodong Sinmun newspaper published several photos that showed Kim watching from an observation post and what appeared to be a missile soaring from a mobile launcher.

KCNA didn’t specify whether the weapons were ballistic missiles or rocket artillery, but said they were developed to suit the North’s “terrain condition” and provide “advantageous tactical character different from existing weapons systems.”

Kim Dong-yub, an analyst at Seoul’s Institute for Far Eastern Studies, said North Korea’s photos and South Korea’s flight data of the launches suggest that the North tested a new weapons system that is different from the short-range ballistic missiles it repeatedly fired in recent weeks.

South Korea’s military had described the previous missiles as similar to the Russian-made Iskander, a solid-fuel, nuclear-capable missile that is highly maneuverable and travels on low trajectories, improving its chances of evading missile defense systems.

North Korea’s fifth round of weapons launches in less than three weeks was seen as a protest of the slow pace of nuclear negotiations and continuance of the U.S.-South Korea military drills the North claims are an invasion rehearsal.

Experts say Trump’s downplaying of the North’s launches allowed the country more room to intensify its testing activity while it seeks to build leverage ahead of a possible resumption of negotiations. Talks have stalled since the collapse of Trump’s second summit with Kim in Vietnam in February over disagreements on exchanging sanctions relief and disarmament.

By launching a slew of weapons that directly threaten South Korea but not the U.S. mainland or its Pacific territories, North Korea also appears to be dialing up pressure on Seoul to make stronger efforts to coax major concessions from the United States on Pyongyang’s behalf.

North Korea in recent months has ignored the South’s calls for dialogue while demanding that Seoul turn away from Washington and resume inter-Korean economic cooperation held back by U.S.-led sanctions against the North.

In a statement released through KCNA, Kwon Jong Gun, director of the U.S. affairs department at Pyongyang’s Foreign Ministry, criticized South Korea for raising concerns over the North’s recent testing activity while continuing the drills with the U.S.

The North also on Saturday lashed out at South Korea’s recent acquisition of U.S.-made F-35 fighter jets and other plans to expand its military capabilities, saying that the South will gain “nothing but destruction” if it pursues a contest of strength with the North.

“Though we are to enter into a dialogue in future as the currents flow in favor of dialogue, (the South) had better keep in mind that this dialogue would be held strictly between the D.P.R.K and the U.S., not between the North and the South,” Kwon said, referring to North Korea by its formal name, the Democratic People’s Republic of Korea.

South Korea has said North Korea’s recent launches could hurt efforts to stabilize peace on the Korean Peninsula and called for the North to uphold an agreement to form a joint military committee to discuss reducing tensions, which was part of an inter-Korean military agreement reached last year.

Hours after the North’s latest launches, Trump tweeted that Kim spent much of a letter he wrote to the president complaining about “the ridiculous and expensive” U.S.-South Korea military exercises. He said that Kim offered him “a small apology” for the recent flurry of missile tests, and that he assured him they would stop when the exercises end.