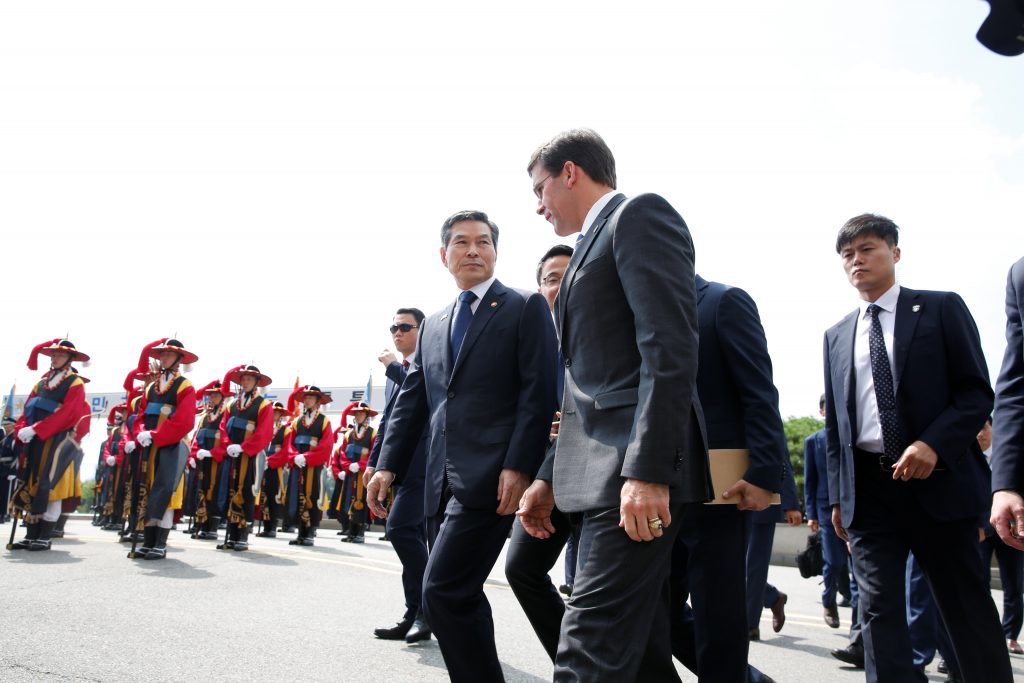 U.S. Defense Secretary Mark Esper met with senior South Korean leaders on Friday amid a series of regional challenges ranging from a bitter trade row between Seoul and Tokyo to the cost of U.S. troops stationed in South Korea.

Esper, on his first international trip since being confirmed as defense secretary, arrived in South Korea on Thursday evening amid an escalating trade feud between two of Washington’s main Asian allies.

While the trade issue, which threatens regional intelligence sharing, came up in his meetings in Seoul, Esper reiterated the importance of the South Korean-U.S. alliance and said the allies would continue to coordinate on North Korea.

In his opening remarks of the meeting with Esper, South Korean Defense Minister Jeong Kyeong-doo said Japan’s export restrictions against South Korea are “causing adverse effects on South Korea-Japan relations and security cooperation among South Korea, the U.S. and Japan.”

South Korea has said it was exploring all options in a bitter trade dispute with Japan, including scrapping an intelligence sharing pact.

The accord, the General Security of Military Information Agreement (GSOMIA), facilitates three-way intelligence gathering with Washington, which is crucial in fending off North Korea‘s nuclear and missile threats. The deal is automatically renewed annually on Aug. 24.

Relations between South Korea and Japan are at their worst in decades, with the trade row rooted in a long-running dispute over compensation for South Koreans forced to work for Japanese firms during World War II.

Esper arrived in Seoul a day after President Donald Trump said South Korea agreed to “pay a lot more” to shoulder the costs required for the upkeep of 28,500 U.S. troops in South Korea and that talks are under way to discuss the issue.

But a spokesman at South Korea‘s Foreign Ministry told reporters on Thursday that the negotiations have not yet begun, and a ministry official said on Friday that Esper did not mention the costs during his meeting with Foreign Minister Kang Kyung-wha, according to Yonhap.

The trip comes after North Korea recently carried out a series of missile tests and with denuclearization talks between the United States and North Korea stalled.

“At a time when the security environment is so severe, it is very meaningful to discuss the security situation on the Korean Peninsula and the South Korea-U.S. alliance,” Jeong said.

Noting that South Korea and the United States are working together to denuclearize North Korea, Jeong praised “President Trump’s amazing imagination that transcends conventions” for bringing about his meeting with North Korean leader Kim Jong Un at the inter-Korean border in June.

On Tuesday, Esper said the United States would not overreact to the short-range missile launches by North Korea and would keep the door open to talks with Pyongyang. He also added that, despite complaints by North Korea, there was no plan to alter future joint military drills with Seoul.

South Korea is Esper’s last stop on a trip that has also included visits to Australia, Japan and Mongolia.