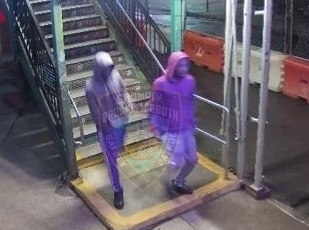 A pair of men believed to be responsible a string of gunpoint muggings in the Boro Park, Kensington and Bensonhurst neighborhoods may have just struck again twice, law-enforcement sources tell Hamodia.

At 10:32 p.m. Thursday night, on 65th Street and 17th Ave., two men, displaying a firearm, robbed a 38-year-old victim of his cellphone, $200 and a MetroCard, before fleeing to a nearby train station. Just after midnight, two men also committed a gunpoint mugging, at 61st St. and 9th Ave., robbing the 21-year-old victim of $500.

Both muggings were committed by two black men wearing hooded sweatshirts, and were strikingly similar to four other crimes committed during the past several weeks.

On Tuesday night, around 10:40 p.m., two men walked up to a 78-year-old man on Ocean Parkway between Caton and Church Aves. in Kensington, and said, “Give me everything you got.” The men robbed the victim of his jewelry and cellphone.

On Sunday night, a 31-year-old man was robbed of his wallet and cellphone by two men at 14th Ave. and 55th Street in Boro Park. A similar crime occurred several days earlier on 47th Street between 12th and New Utrecht Aves. in Boro Park, and at New Utrecht Ave. and 81st St. in Bensonhurst.

All six muggings were committed near a strain station, by two young black men who displayed a gun during the crime, and fled to the train station following the robbery. In at least four of the incidents, the muggers were wearing hooded sweatshirts.

The suspects are described as black males around 20 years old and six feet tall.