Israel In Wake of Terror Attack, Netanyahu Pledges Israeli Sovereignty in All Yehudah and Shomron
Israel 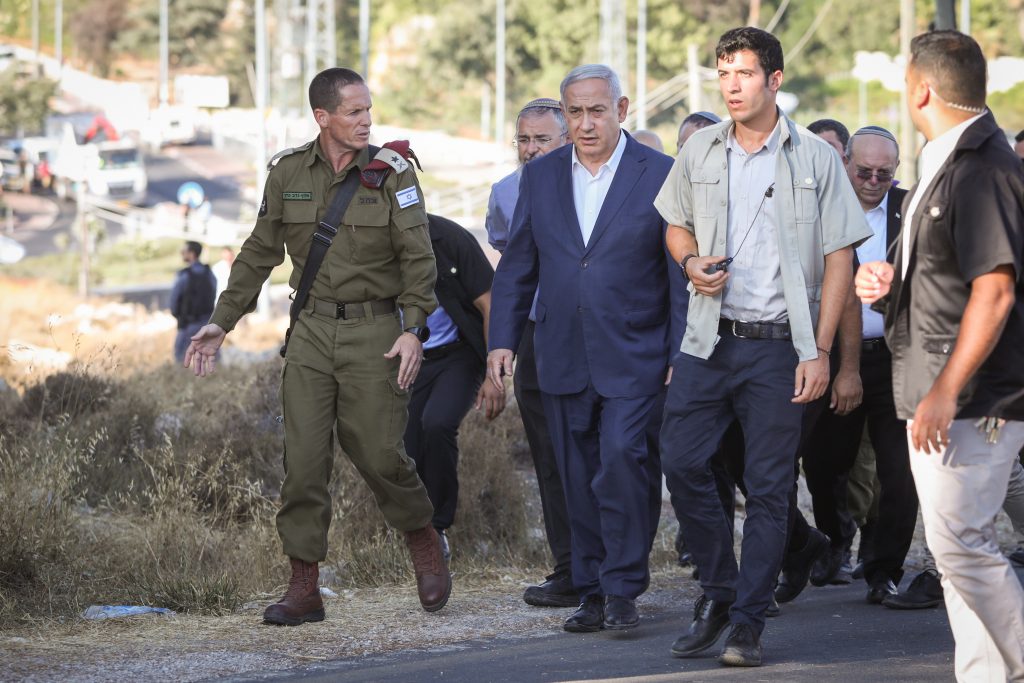 In the wake of Thursday’s terror attack, Prime Minister Binyamin Netanyahu pledged to extend Israeli sovereignty to “all parts” of Yehudah and Shomron.

“We know that the Land of Israel is acquired through suffering,” he said, referring to the murder of Dvir Sorek, Hy”d, at a cornerstone-laying ceremony for 650 new housing units in Beit El.

“He was from a family that has already made a heavy sacrifice for the Land of Israel,” the prime minister said, in reference to Sorek’s grandfather, who was killed in a 2000 terror attack.

“These vicious terrorists, they come to uproot — we come to plant. They come to destroy — we come to build,” he added. “Our hands will reach out and we will deepen our roots in our homeland, in all parts of it.”

The prime minister later visited the scene of the crime, in Gush Etzion. “We can see here the U-turn made by the car after the murder,” Netanyahu said.

“Our hand will reach them [the murderers] and we will settle our score with them. The investigation is going forward and is as its height,” he added.

“More murder & boasting by Hamas – reprehensible actions by an org[anization] that chooses death & destruction over taking care of the people they claim to lead. Our deepest condolences to the family,” Greenblatt tweeted.

IDF Chief of Staff Aviv Kohavi went to the scene where the body was found, near Migdal Oz in the Gush Etzion area of Yehudah and Shomron.

Army spokesman Ronen Manelis says Kohavi was briefed on details of the attack and of the widespread manhunt for the terrorist. The murder may have taken place elsewhere, and the body left there, according to reports.

Blue and White party head Benny Gantz was at the scene as well. “The IDF and security forces will pursue [the perpetrators] and get them — dead or alive,” Gantz said.

“Not far from here… three youths were kidnapped and murdered five years ago,” added Gantz, who was IDF chief during at the time, which triggered a chain of events that led to the 2014 Gaza war.

Gantz also promised to keep building in Yehudah and Shomron. “We’ll do this here in the Etzion bloc and any other strategic area that seems appropriate,” he said.

Also, in a post on Twitter, E.U. ambassador to Israel Emanuele Giaufret, expressed his condolences to the Sorek family, writing:

“Deepest condolences to the family and relatives of 19-year old Dvir Sorek brutally murdered today. No justification for violence.”