U.S. Lays Out Enforcement Priorities for Animals on Planes 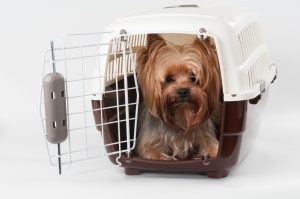 The government is telling airlines and passengers how it will enforce rules governing animals that people bring on planes.

The Transportation Department said Thursday that airline employees can bar any animal they consider a safety threat. Airlines, however, can be punished if they ban an entire dog or cat breed, such as pit bulls.

The department’s enforcement office said that it doesn’t plan to stop airlines from asking passengers “reasonable” questions about a service animal’s vaccinations, training and behavior. Airlines can require advance notice if passengers plan to bring an emotional support animal — several already do — but can’t impose the same requirement for service animals such as guide dogs for the blind.

The number of animals on planes has been rising in recent years as more people bring a companion for emotional support. Most flying pets are tame, but there have been some well-publicized instances of animals biting passengers or airline employees and other reports of animals relieving themselves in the cabin.

An American Eagle flight attendant needed stitches after a passenger’s dog bit him on the hand during a flight last month. The man’s union, the Association of Flight Attendants, called the enforcement policy an important step to deal with a “mess of animals loose in the aircraft cabin.”

The Transportation Department plans to publish the guidelines next week, and airlines will have 30 days after that to conform their rules with the federal policy.

Delta Air Lines could face pressure to change two of its rules: A ban on pit bulls in the cabin, and a ban against emotional support animals on flights longer than eight hours. The department said, however, that airlines can make passengers demonstrate before a long flight that their animal can relieve itself in a sanitary way.

A Delta spokeswoman said the airline was still reviewing the Transportation Department’s guidance.

The Transportation Department endorsed many other rules that airlines have adopted, such as barring extremely young animals and exotic ones including snakes from the cabin.

Airlines for America, a trade group of major U.S. airlines other than Delta, and the flight attendants’ union praised the guidelines. Both groups blamed the increase of animals in the cabin on passengers who fraudulently claim they need an emotional support animal to fly. Airlines must waive pet fees for comfort animals if the owner has a doctor’s note vouching for their need to have the animal companion.

The priorities announced Thursday could serve as a warm-up for new regulations that the department hopes to enact by next summer. On a call with reporters, a senior department official declined to say what might be in those rules.