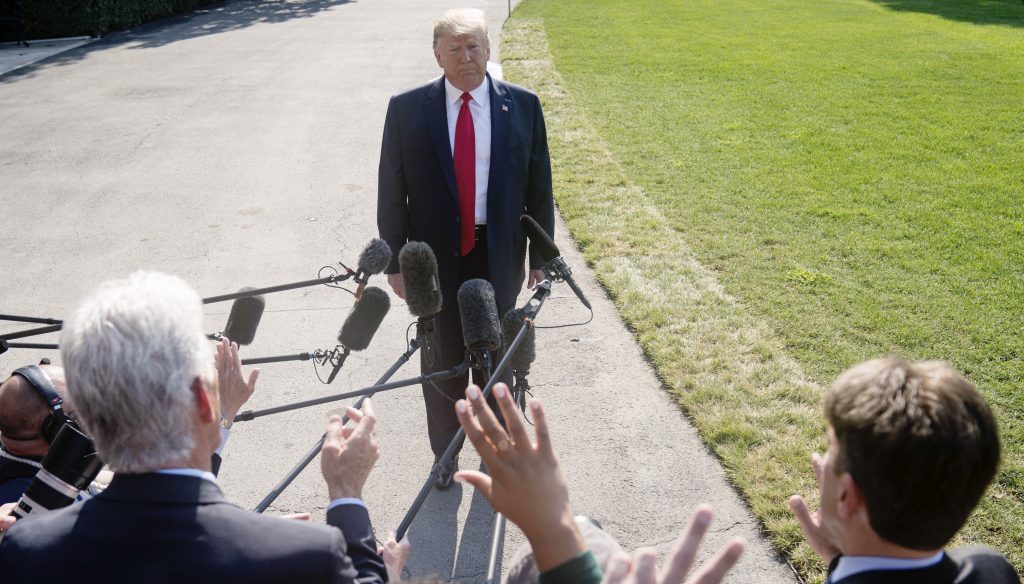 “One would think that I would be thrilled with our very strong dollar. I am not!” Trump said in a tweet. “The Fed’s high interest rate level, in comparison to other countries, is keeping the dollar high, making it more difficult for our great manufacturers” to compete, identifying Caterpillar, Boeing and Deere.

Trump’s tweets escalate his complaints over the dollar’s value and the Federal Reserve as he wages an increasingly heated trade war with China. The attack comes days after his administration branded China a currency manipulator and the president himself told reporters on July 26 that he had not ruled out intervention to weaken the dollar.

Trump vowed to crack down on China during his 2016 White House bid and has placed his economic record at the center of his campaign to win re-election next year.

The dollar has gained against nearly all of its Group of 10 peers this year. A trade-weighted index of the greenback adjusted for inflation is close to its highest point since 2003, showing the headwinds U.S. exports face.

“With substantial Fed Cuts (there is no inflation) and no quantitative tightening, the dollar will make it possible for our companies to win against any competition,” the president said Thursday. The Fed cut rates last week and ended the gradual shrinking of its balance sheet, which Trump calls quantitative tightening.

The dollar slipped following the president’s comments and analysts said investors were concerned that the risk of a Trump currency intervention was growing.

“The initial reaction was quite sharp, and probably reflects heightened anxiety around U.S. FX intervention,” said Erik Nelson, a currency strategist at Wells Fargo. He said the risk is “still moderate and pretty well below 50%, but the developments this week probably raised the probability somewhat.”

Contradictory statements from the White House have not helped to clarify the position. Top Trump economic adviser Larry Kudlow said on July 26 that the administration had ruled out currency intervention. A few hours later, the president told reporters “I didn’t say I’m not going to do something” on the dollar. Kudlow doubled down on Aug. 5, repeating during an interview on Bloomberg that intervention was off the table.

Concern over the trade war has roiled U.S. stocks since Trump announced the day after the Fed cut rates that he was prepared to raise tariffs on $300 billion of Chinese imports on Sept. 1. Beijing retaliated by allowing the yuan to slide past the key level of 7 per dollar for the first time since 2008.

Fed Chairman Jerome Powell said last week that businesses have reduced investment largely because of weak demand and a global slowdown, rather than high interest rates.

Companies “don’t come in and say, ‘We’re not investing because, you know, the federal funds rate is too high,”‘ Powell said at a press briefing following the Fed’s quarter-point interest-rate cut. “I haven’t heard that from a business. What you hear is that demand is weak for their products.”

The strengthening dollar weighed on Caterpillar’s second-quarter results, especially with its gains against the euro and Australian dollar, the company said last month during an earnings call.

Others have voiced a different perspective.

General Motors said currency fluctuations actually helped the company’s second-quarter earnings. The automaker was able to more than recoup price increases for its vehicles as a result of inflation in Argentina and Brazil, which helped operating profit during the quarter.

German sportswear maker Adidas said it’s more worried about a currency war between the U.S. and China than the possibility that Trump would increase tariffs on footwear.

“There is no winner in a currency war,” Chief Executive Officer Kasper Rorsted said on a call with reporters earlier on Thursday. “Eventually everybody will lose because it will lead to a slowdown in the global economy.”