General Puerto Rico, With 3 Governors in A Week, Considers A 4th 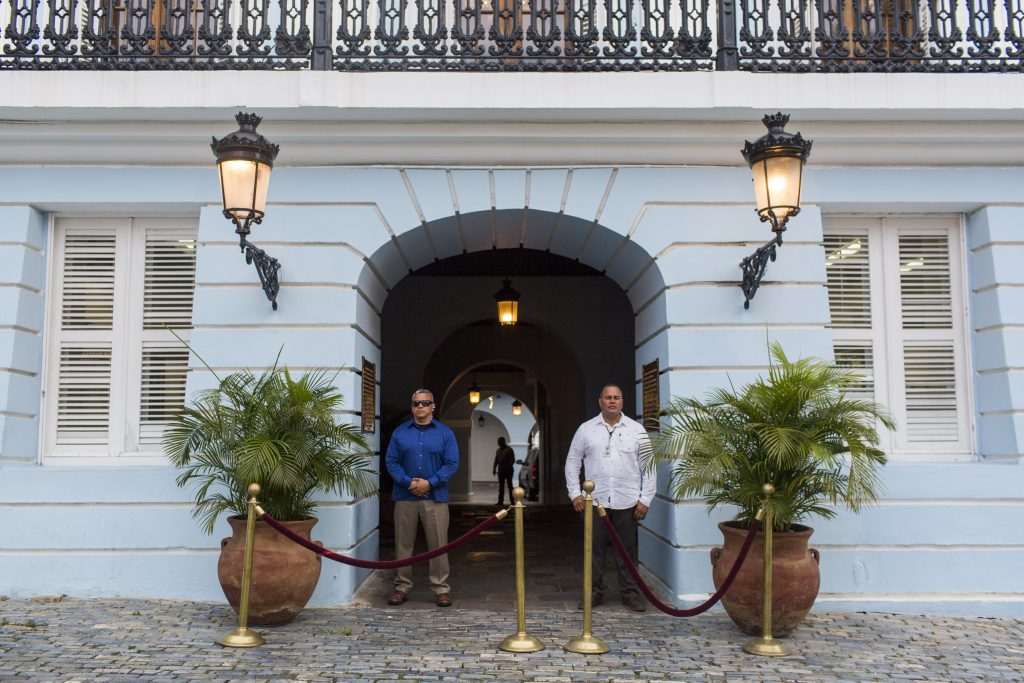 A day after Puerto Rico got its third governor in less than a week following angry street protests, top officials from new leader Wanda Vázquez’s own party were talking openly Thursday about their desire to see a fourth take over the position.

“The leadership … basically agrees that Jenniffer should be the governor,” said José Meléndez of the New Progressive Party. “It is a matter that must be treated bit by bit because we do not know what is in the mind of Wanda Vázquez.”

But “Jenniffer is the consensus person,” he added. “This should happen quickly, but it depends on what the governor says. … The key to breaking the bottleneck lies with Wanda Vázquez.”

For González to become governor, she would have to be nominated to the open secretary of state position and confirmed. Then Vázquez would have to resign, though the new governor said she did not intend to step down despite previous comments that she didn’t want the job.

“We will discuss pros and cons,” said Rep. María de Lourdes Ramos, who said she does not necessarily share the Senate president’s views on González. “Right now what’s best for us is unity.”

González said the presidents of the House and Senate called her last weekend asking if she was available to become secretary of state as a candidate of consensus, and she agreed if it would help restore credibility and stability to Puerto Rico.

“There must be fundamental changes in the entire structure of government, in all cabinet officials and in all contracts that the government of Puerto Rico has,” González said, adding that she would meet with Vázquez later Thursday. “It’s time that people and not politicians become the priority.”

González also warned that the U.S. government has doubts about how the island is handling federal funds: “The specter of corruption has called into question access to those funds. … They don’t trust Puerto Rico’s institutions or its officials.”

Even after a Supreme Court ruling Wednesday that Pierluisi had been placed in office unconstitutionally, resulting in Vázquez swearing in as governor the same evening, people on the economically struggling territory of 3.2 million were already bracing for more turmoil.

The political establishment was knocked off balance by huge street protests spawned by anger over corruption, mismanagement of funds and a leaked obscenity-laced chat.

Vásquez sought to calm the anger in a statement late Wednesday, saying she shares the pain of recent weeks and vowing to bring unity and stability.

“We have all felt the anxiety provoked by the instability and uncertainty,” Vázquez said. “Faced with this enormous challenge and with G-d ahead, I take a step forward with no interest other than serving the people as I have done my whole life.”

Vázquez, 59, has worked in government for more than 30 years and is the second woman to be governor. She would serve out the remainder of Rosselló’s term until elections in November 2020 — unless she doesn’t.

At least some involved in the anti-Rosselló protests are calling for her ouster, too, seeing her as a continuation of the previous administration.

Critics say Vázquez was not aggressive enough as justice secretary in pursuing corruption investigations involving members of her New Progressive Party and that she did not prioritize gender violence cases. She’s also been accused of ignoring investigations into alleged mismanagement of hurricane aid, and of possible ethics violations.

Appointed justice secretary in January 2017, Vázquez previously worked as a district attorney for two decades at Puerto Rico’s Justice Department, handling domestic abuse cases. In 2010, she was appointed director of the Office for Women’s Rights.

In her broadcast statement Wednesday night, Vázquez said she would work for all Puerto Ricans.

“History has brought me here without any political aspirations,” she said. “I recognize that I was not chosen by the people for this position. … But I came from those same people. I am a product of public schools. … I know what it is to come from nothing. I know what hard work is.”

A small group of protesters gathered earlier outside the governor’s mansion in San Juan’s colonial district calling for her to resign and yelling: “There’ll be no peace as long as there’s impunity!” The crowd remained calm as onlookers including tourists took pictures and video of them.

Also Thursday, the federal control board that oversees Puerto Rico’s finances announced it would investigate services provided by global accounting firm BDO Puerto Rico, which has been awarded more than 95 contracts by the island’s government and whose former managing partner was recently charged by federal authorities for alleged fraud.