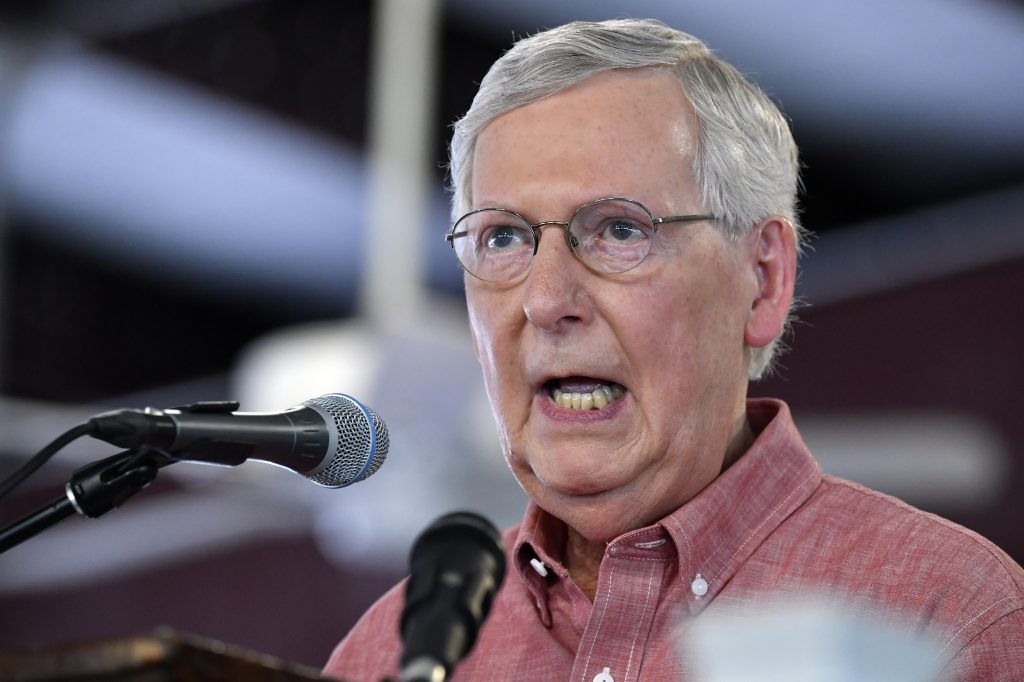 Senate Majority Leader Mitch McConnell said Thursday that he spoke to President Donald Trump about the Senate working on legislation to tighten the nation’s gun laws after the August recess as both men face heightened public pressure to do something about gun violence after last weekend’s two mass shootings.

The Kentucky Republican, in his first interview since the shootings left 31 dead and dozens injured, specifically mentioned expanding background checks on gun purchases and “red-flag” laws that would allow authorities to confiscate a firearm from someone deemed a risk to themselves or the public.

“Those two items that for sure will be front and center as we see what we can come together on and pass,” McConnell said on Kentucky radio station 840WHAS.

At the same time, McConnell, who is running for reelection next year, underscored the difficulty in reaching consensus on a divisive issue. Congress has not passed significant gun control legislation since the 1990s.

“It’s always a challenge in making federal legislation, because we do have a lot of differences in our country over an issue like this,” he said. “I mean how people in South Dakota, for example, feel about this issue would be dramatically different from how they feel about it in Boston, Massachusetts.”

McConnell, who is recuperating from a fractured shoulder, said he spoke to Trump on Thursday.

Democrats have been urging McConnell to bring the Senate back to Washington immediately to vote on a measure that the House passed in February to expand background checks on firearm sales. House Speaker Nancy Pelosi, D-Calif., sent a letter Thursday to Trump, asking him to use his constitutional powers to force the Senate back into session to vote on the bill.

“Mr. President, we have an opportunity to work in a bipartisan way to pass gun violence prevention background checks. However, Leader Mitch McConnell, describing himself as the ‘grim reaper,’ has been an obstacle to taking any action,” Pelosi wrote.

But McConnell has been steadfast that he wouldn’t bring up anything unless it had Trump’s support and could garner a filibuster-proof 60 votes. Trump has threatened to veto the House-passed bill.

McConnell described Trump as “anxious to get an outcome.”

“And so am I,” McConnell said. “And I believe the Democrats will have to just admit that it’s better to get a result than just engage in this sort of endless point-scoring that has the tendency to occur after one of these awful, awful incidents.”

Trump has spoken to National Rifle Association CEO Wayne LaPierre at least three times since the shootings and has been telling people he can get the NRA on board with something, according to administration officials who spoke on the condition of anonymity to describe private conversations. LaPierre said in a statement that he wouldn’t discuss what he and Trump spoke about privately.

“But I can confirm that the NRA opposes any legislation that unfairly infringes upon the rights of law-abiding citizens,” he said. “The inconvenient truth is this: the proposals being discussed by many would not have prevented the horrific tragedies in El Paso and Dayton. Worse, they would make millions of law abiding Americans less safe and less able to defend themselves and their loved ones.”

LaPierre continued, “The NRA will work in good faith to pursue real solutions to the epidemic of violence in America. But many proposals are nothing more than ‘sound bite solutions’ – which fail to address the root of the problem, confront criminal behavior, or make our communities safer.”

The Senate last attempted to pass new gun laws a few months after the December 2012 Sandy Hook Elementary School massacre in Newtown, Connecticut. A bipartisan effort involving Sens. Joe Manchin, D-W.Va., and Patrick Toomey, R-Pa., on a background checks bill gave it a greater chance at passing than there had been in years, but it ultimately fell short by six votes.

There is talk of resurrecting the Manchin-Toomey bill, which closes loopholes in background check laws similar to a measure passed in the House this year. But gun control advocates prefer the House version because the senators included some concessions to pro-gun rights, such as providing exceptions for sales between family members.

Sens. Lindsey Graham, R-S.C., and Richard Blumenthal, D-Conn., have said they are working on a “red-flag” bill that would offer federal grants and other incentives for states to develop laws implementing emergency risk protection orders. Those statutes would allow family members, law enforcement officials and others to petition a judge to bar firearms from someone they believe is an imminent threat to themselves or others. Seventeen states and the District of Columbia already have such laws on the books, according to the Giffords gun-control group.

“What we can’t do is fail to pass something, you know, by just locking up and failing to pass – that’s unacceptable,” McConnell said. “What I want to see here is an outcome not a bunch of partisan back-and-forth, these shots across the bow.”