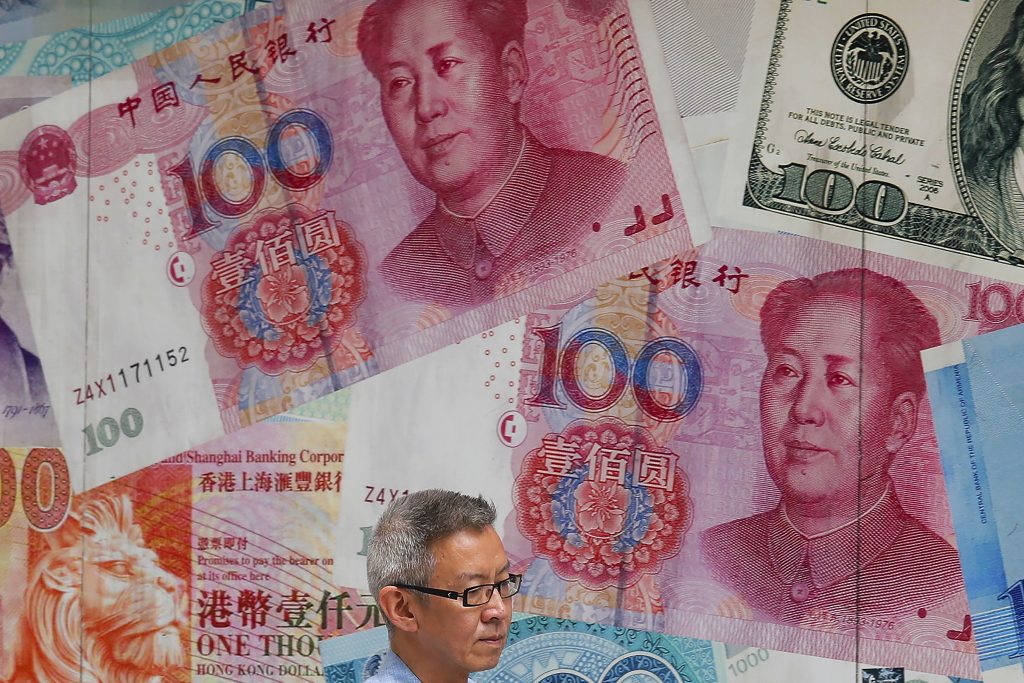 The yuan edged down to 7.0488 to the U.S. dollar, about 0.4% below its level late Tuesday. The currency strengthened slightly to 7.0443 to the dollar in the afternoon but still was below the previous day’s level.

Financial markets tumbled after Beijing allowed the yuan to fall Monday to an 11-year low against the dollar, breaking through the politically sensitive level of seven to the U.S. currency. Washington responded by declaring officially that China improperly manipulates its exchange rate, opening the way for possible sanctions.

On Tuesday, central bank officials told foreign companies “the yuan will not continue to depreciate sharply in the future,” the bank press office said in a statement. It gave no details but said “two-way fluctuation” of the currency “will become the norm in the future.”

Tension over currency adds to a sprawling U.S.-Chinese fight over Beijing’s trade surplus and technology policies that companies and investors worry will chill global growth.

The yuan’s moves over the past week are small compared with fluctuations of the euro and other major currencies. But Washington complains the yuan is too weak, making China’s export prices unfairly low and swelling its trade surplus. That makes any decline politically volatile.

The People’s Bank of China sets the yuan’s exchange rate each morning and allows it to rise or fall 2% during the day. It can intervene and buy or sell currency — order Chinese commercial banks to do so — to guide the exchange rate.

The bank lowered the opening level for trading Tuesday, but traders were encouraged when it was slightly higher than they expected. That, plus a central bank statement late Monday promising to keep the currency stable, helped to stabilize financial markets.

On Wednesday, the central bank lowered the starting point for trading again, setting it at 6.9996 to the dollar, almost 0.5% below Tuesday’s starting level. That would allow the yuan to slide to below 7.1 to the dollar while staying within the trading band.

Officials told companies the slide will stop, “but they haven’t seen that today,” said Chris Weston of Pepperstone in a report. “This is again proving central to moves across markets in Asia.”

The Chinese central bank showed it can “steer global markets” and “quickly weaken” the yuan if needed to offset U.S. tariff hikes, Stephen Innes of Oanda said in a report.

“This is about China proving a point,” Innes said. “They have a brawny tool at their disposal.”

President Donald Trump’s punitive tariffs on Chinese products have added to downward pressure on the yuan by prompting concern about a slowdown in the world’s second-biggest economy.

Last week, Trump stepped up their fight by threatening to hike tariffs on an additional $300 billion of Chinese goods, effective Sept. 1.

That came after the latest round of talks aimed at ending the tariff war concluded in Shanghai with no sign of a deal. Negotiators are due to meet again in September in Washington.

Economists say if the Sept. 1 tariff hike goes ahead, the dent in Chinese exports and economic growth could weaken the yuan to as low as 7.2 to the dollar.

A weaker yuan might lead to an outflow of capital, raising borrowing costs at a time when Chinese leaders are trying to shore up cooling economic growth. That would add to downward pressure on the exchange rate.

On Wednesday, the latest central bank data on China’s foreign currency reserves suggested regulators did little buying or selling in July to manage the exchange rate. The reserves declined by a small margin of $15.5 billion in July to just over $3.1 trillion.

Since then, however, “capital outflows have almost certainly picked up,” said Julian Evans-Pritchard and Martin Lynge Rasmussen of Capital Economics in a report. “There are signs that this has already encouraged the PBOC to step-up intervention to manage the pace of depreciation.”