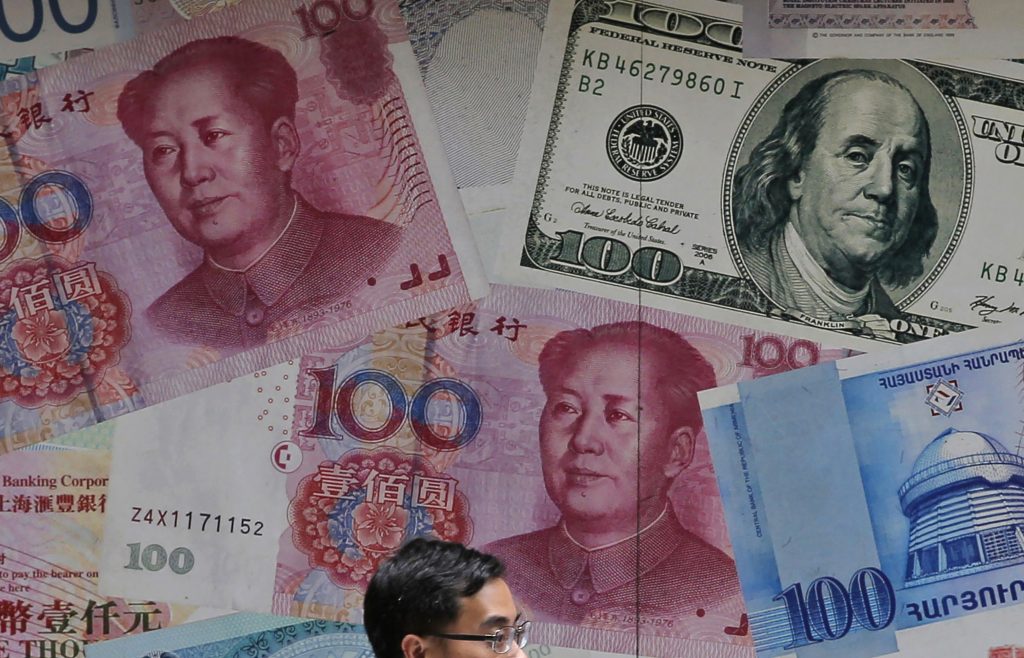 China stabilized its currency Tuesday, suggesting it might hold off from aggressively letting the yuan weaken as a way to respond to U.S. tariffs on Chinese goods.

The yuan declined to 7.0562 to the dollar before strengthening back to 7.0297 in the afternoon. That came a day after Beijing sent financial markets tumbling by allowing the currency to fall to an 11-year low. A weaker yuan can help neutralize U.S. tariffs on Chinese goods by making them more price-competitive on international markets.

The Trump administration responded Monday by officially declaring that China improperly manipulates the yuan’s value. That opens the way to possible new penalties on top of tariff hikes already imposed on Chinese goods in a fight over Beijing’s trade surplus and technology policies.

The sight of the world’s two economies engaging in a tit-for-tat economic dispute has shaken investors. So the fact that China let its currency stabilize on Tuesday offered some hope that the sides might try to keep the situation from escalating further. U.S. stocks clawed back some of the steep losses from Monday.

The Chinese central bank governor, Yi Gang, tried to reassure markets, promising in a statement late Monday “not to use exchange rates for competitive purposes.”

The central bank is “committed to maintaining the basic stability” of the yuan “at a reasonable and balanced level,” Yi said.

But relations remain tense between the U.S. and China, which have engaged intermittently in talks to address President Donald Trump’s complaints that China does not trade fairly. The next round of talks is scheduled for September in Washington.

Tao Wang, an analyst at UBS bank, said in a report that the bank sees “an increasing risk to a delay or cancellation of the planned trade talks,” because of the recent escalation in tensions between the two sides.

Trump rattled investors with last week’s surprise announcement of punitive tariffs on an additional $300 billion of Chinese imports, effective Sept. 1. That came after a round of talks on resolving their tariff war ended in Shanghai with no indication of a deal.

The Chinese central bank said the yuan’s decline has been driven by market forces.

The People’s Bank of China sets the exchange rate each morning and allows the yuan to fluctuate by 2% against the dollar during the day. The central bank can buy or sell currency — or order commercial banks to do so — to dampen price movements.

On Tuesday, the yuan’s starting exchange rate was set at 6.9683. That would allow the currency to weaken to as much as 7.100 while staying within the 2% trading band.

Chinese regulators are trying to make the state-controlled exchange rate more responsive to market forces, which are pushing the yuan lower.

Trump’s tariff hikes have put downward pressure on the yuan by fueling fears that economic growth might weaken.

The yuan has lost 5% against the dollar since hitting a high in February of 6.6862 to the dollar.