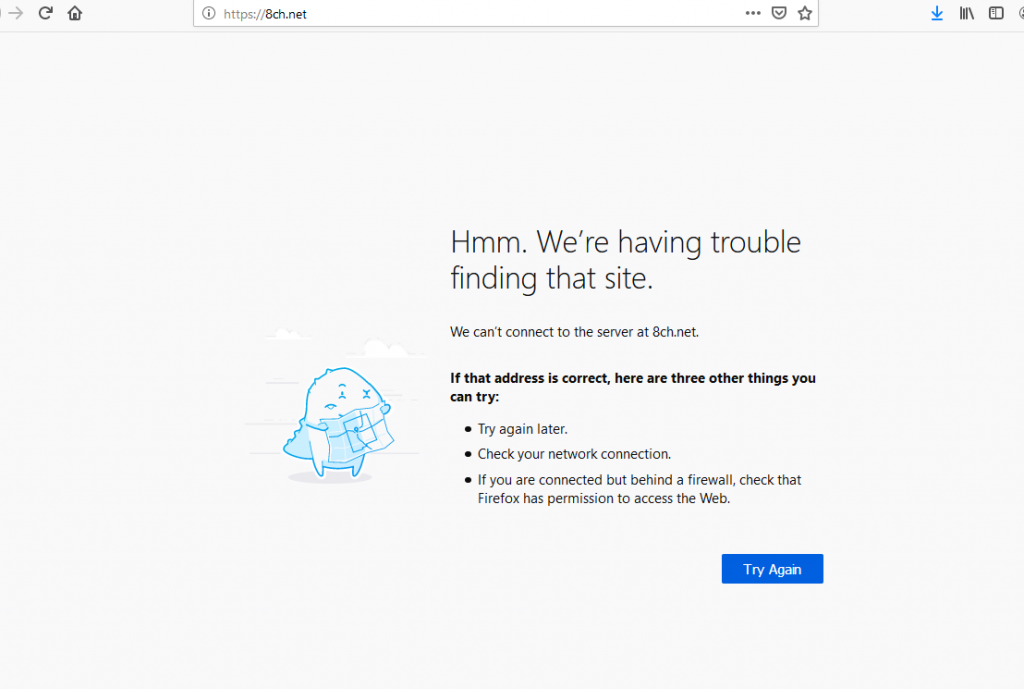 The online message board 8chan suffered sporadic outages Monday after its cybersecurity provider cut it off for what it called a “cesspool of hate” following mass shootings in Texas and Ohio.

But the board, which has a history of use by violent extremists, also quickly found a new online host. That company also provides such support for another social-media site frequented by white supremacists that doesn’t ban hate speech.

8chan was up and down after the security company Cloudflare said it would no longer provide services that protect websites from denial-of-service attacks that can make them unreachable.

The operators of 8chan said there might be downtime in the next one or two days as the site sought a solution, and online records indicated the site had been moved to a new domain host: Sammamish, Washington-based web services provider Epik.com.

The company bills itself on its site as “the Swiss bank of domains.” Epik.com did not immediately respond to requests sent by email and via LinkedIn.

Police are investigating commentary posted on 8chan and believed to have been written by the suspect in a shooting Saturday that killed 20 people in El Paso, Texas.

If there is a connection, it would be the third known instance of a shooter posting to the site before going on a rampage following mass shootings at two New Zealand mosques in the spring, and another at a California synagogue.

The suspect in El Paso “appears to have been inspired” by discussions on 8chan, said Cloudflare CEO Matthew Prince in a blog post on his company’s site. He said a suspect in an earlier shooting at a synagogue in Poway, California, also posted a “hate-filled ‘open letter'” on 8chan, as did the mosque attacker in Christchurch, New Zealand.

“8chan has repeatedly proven itself to be a cesspool of hate,” wrote Prince. “They have proven themselves to be lawless and that lawlessness has caused multiple tragic deaths.”

Prince acknowledged that little can be done under current rules to silence sites like 8chan.

Two years ago, Cloudflare terminated service to the Daily Stormer, a neo-Nazi and white supremacist site.

“Today, the Daily Stormer is still available and still disgusting,” Prince wrote. “They have bragged that they have more readers than ever. They are no longer Cloudflare’s problem, but they remain the internet’s problem.”

In fact, the Daily Stormer’s new security provider, BitMitigate, was purchased in February by Epik.com , whose CEO is Robert Monster of Bellevue, Washington.

In November, Monster defended in a blog post his company’s decision to host another hate site after its previous domain host, GoDaddy, dropped it.