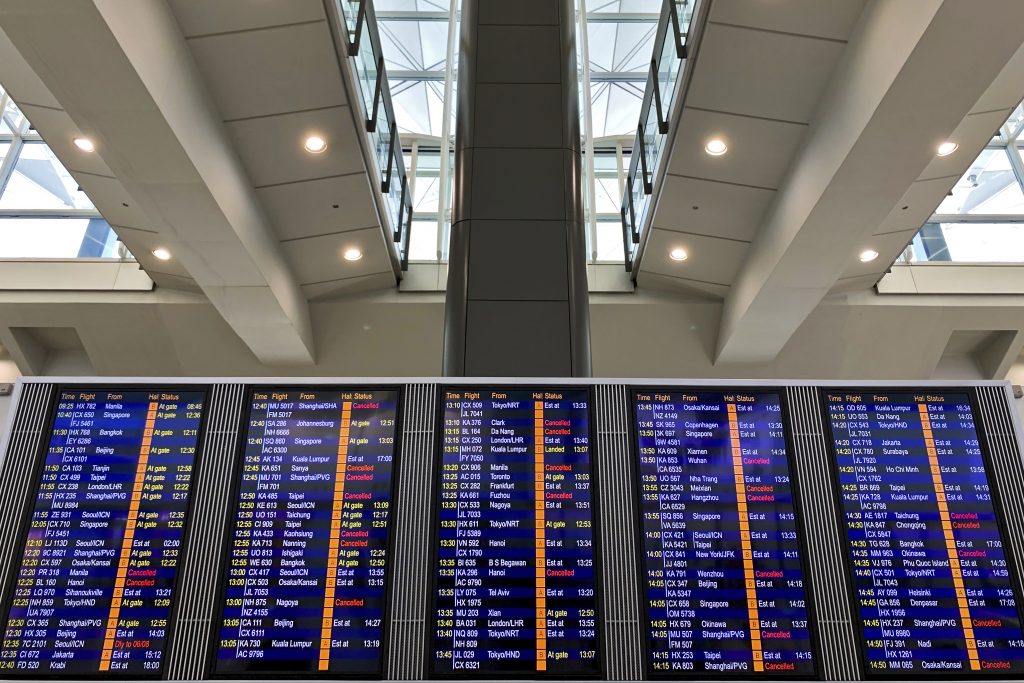 Hong Kong leader Carrie Lam maintained that she has no plans to resign in the face of a turbulent pro-democracy movement that held a general strike Monday, leading to more than 100 flight cancellations and major traffic disruptions.

The semi-autonomous Chinese city is on “the verge of a very dangerous situation,” said Lam, who said current protests were operating with “ulterior motives” that threaten Hong Kong’s prosperity and security.

“I don’t think at this point in time, resignation of myself or some of my colleagues would provide a better solution,” the chief executive said at a news conference.

Protesters snarled the morning rush hour by blocking train and platform doors, preventing subway and commuter rail trains from leaving their stations. After demonstrators in face masks refused to move from train entry points in several stations, and commuters found themselves stranded on crowded platforms and some required medical attention.

More than 100 flights have been cancelled out of Hong Kong after a large number of airport employees called in sick in apparent participation in the general strike, Hong Kong media reported. Public broadcaster RTHK said Cathay Pacific and other domestic carriers such as Hong Kong Airlines were the most affected. Airport express train service was also suspended.

The citywide strike and demonstrations in seven Hong Kong districts moved forward Monday following a weekend of clashes between protesters and riot police on the streets. They are part of a summer of fiery demonstrations that began in June against proposed extradition legislation that would have allowed residents to be sent to mainland China to stand trial.

While the government has since suspended the bill, protesters have pressed on with broader calls for democratic reforms and an investigation into alleged police brutality.

The Communist Party-led central government in Beijing has condemned what they call violent and radical protesters who have vandalized the Chinese national anthem and national flag on the sidelines of major rallies. China has accused unnamed “foreign forces” of inflaming the demonstrations out of a desire to contain the country’s development.

On Chinese state broadcaster CCTV’s daily noon news report, an anchor read aloud from a strongly-worded editorial titled “The Chaos in Hong Kong Must Not Continue.”

“We warn those maniacs and thugs who intend to continue to mess up Hong Kong by holding to a fantasy that you must pay a price for your savage revenge,” the editorial said. “So please become aware of your errors, turn back from your incorrect path and set down the butcher’s knives.”

A former British colony, Hong Kong was returned to China in 1997 under the framework of “one country, two systems,” which promised the city certain democratic freedoms not afforded to the mainland. But some Hong Kong residents feel that Beijing has been increasingly encroaching on their freedoms in recent years.

“We hope the learned people in Beijing would at least deliver some sincerity by suggesting via Carrie Lam, ‘Okay, you guys want democracy, perhaps we can talk,'” Mo said Monday. “We can talk — just three words. And maybe that can help appease the society.”