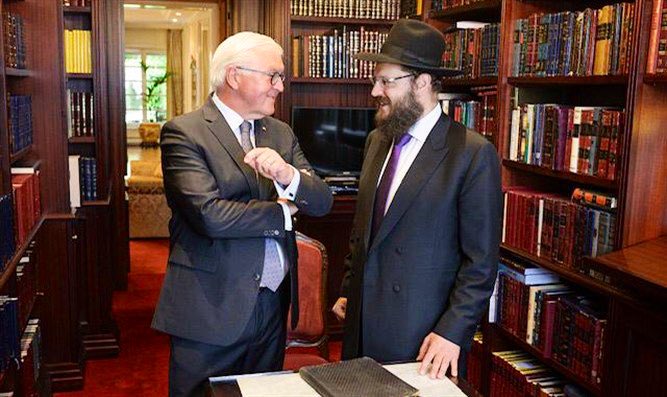 On Sunday, in an unprecedented occurrence, the President of Germany, Frank-Walter Steinmeier, visited Rabbi Yehuda Teichtal, Rav of the Gemeinde, the official Jewish community of Berlin and also the executive director of Chabad Berlin, at his home. President Steinmeier came to express his support for Rabbi Teichtal following a recent very unpleasant incident.

Rabbi Teichtal was walking home from shul with his young son on a Friday night, when two men inside an apartment block began shouting at him in Arabic. Although Rabbi Teichtal did not understand what they were saying, he told Hamodia that it was clear from their tone of voice that they were not being complementary towards him, so he began to walk quicker in order to take his son home safely and avoid a confrontation. As he passed the men, they shouted “Freedom for Palestine” in German and spat at him.

Since he did not want to spoil the Shabbos atmosphere for his family and the table of guests waiting at home for him, nor upset people in shul the next day, the Rabbi did not discuss what had happened over Shabbos. However, on motzei Shabbos he reported it to the local police, who took the matter very seriously and opened an investigation. The police also told Rabbi Teichtal that he should publicize what had happened.

The response was completely unexpected. Rabbi Teichtal told Hamodia that he began to receive letters and messages of support from German politicians across the spectrum, including a number of ministers, as well as from faith leaders and members of the public – over 200 in total. It seems that the combination of the emotive image of a father and son suffering abuse on the way home from Friday night prayers with the perceived insult to the whole kehillah when a prominent rabbi is insulted struck a chord with the German people.

Rabbi Teichtal responded by using this as an opportunity to suggest measures to improve education about tolerance and respect in wider society, and for the Jewish community to strengthen their Jewish identity. He explained that he has known President Steinmeier for around 13 years, since he was the Foreign Minister, and that he wanted to show his firm support both for Rabbi Teichtal personally and for the Jewish community in general. As Rabbi Teichtal said, had the President invited him to his residence for a meeting, that would have been considered to be a significant honor and conveyed a generous message. When the President called him on Friday and said he would like to visit on Sunday, Rabbi Teichtal was extremely moved and honored.

During the meeting, which he described as inspiring, Rabbi Teichtal showed President Steinmeier a copy of Eim Habanim Semeicha, authored by his great-grandfather, Rabbi Yissochor Shlomo Teichtal, Hy”d. This was a poignant reminder, said Rabbi Teichtal, that although Jews have always been persecuted, the Torah lives on. His great-grandfather was murdered towards the end of World War Two, but now Rabbi Yehuda Teichtal is living in Berlin, teaching Torah and presiding over institutions which are having a huge impact on the level of Yiddishkeit in the city. He said that when he came to Berlin some 23 years ago, there were around 10,000 Jews there. Now it is one of the fastest growing communities in Europe and there are around 50,000 Jews. Rabbi Teichtal said that he explained to the president that members of his community, and the education offered in the Jewish High School, are vibrant examples of the way in which it is possible to learn Torah and live an authentic Jewish life, whilst being integrated into society.

With this in mind, he said that the anti-Semitic abuse he suffered should be used a springboard to further improve respect and tolerance between different groups in society. Most Germans, said Rabbi Teichtal, are tolerant and want the Jewish community to thrive, but sadly there are some people who have been imbued with anti-Semitism, perhaps even since birth, possibly originally in other countries. It must be made clear to them, he said, that any form of racism or prejudice is unacceptable, and that those who display it will be dealt with according to the law.

Rabbi Teichtal said that the Jewish community regularly hosts groups, such as soldiers, policemen and members of other faiths, who want to learn more about Judaism. He hopes that the outrage generated by this incident will act as a catalyst to further increase tolerance and understanding between people. To this end, there will be a solidarity meeting attended by politicians, dignitaries and well-wishers, held in the shul an hour before Shabbos this week.