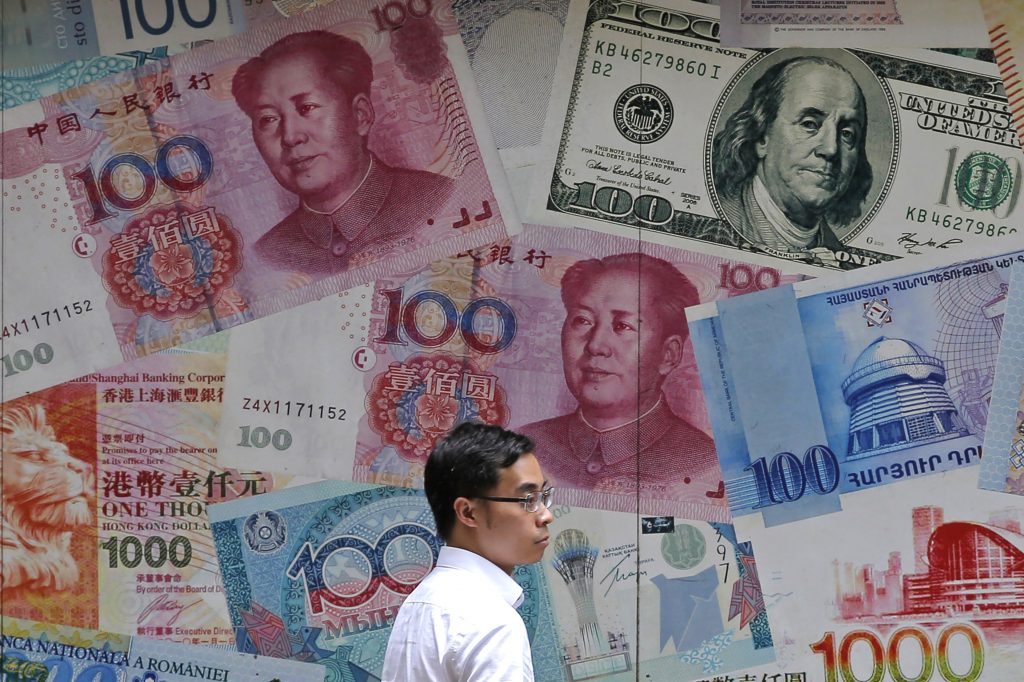 China allowed its yuan to fall below the politically sensitive level of seven to the U.S. dollar on Monday for the first time in 11 years, prompting concern Beijing might use devaluation as a weapon in a tariff war with Washington.

The currency weakened to 7.0391 to the dollar by late afternoon, making one yuan worth 14.2 cents, its lowest level since February 2008.

“The thought of a currency war is crossing more than a few traders’ minds,” Stephen Innes of VM Markets said in a report.

China’s central bank sets the exchange rate each morning and allows the yuan to fluctuate by 2% against the dollar during the day. The central bank can buy or sell currency — or order commercial banks to do so — to dampen price movements.

It appears “the currency is now also considered part of the arsenal to be drawn upon,” Robert Carnell of ING said in a report. He said Monday’s move might be part of “a concerted series of steps aimed at pushing back at the latest U.S. tariffs.”

The level of seven yuan to the dollar has no economic significance, but could revive U.S. attention to the exchange rate.

Until now, economists said the potential jolt to financial markets of falling beyond that level was big enough that the People’s Bank of China would step in to put a floor under the currency.

A central bank statement Monday blamed “unilateralism and trade protectionism measures,” a reference to Trump’s tariff hikes. But it tried to play down the significance of “breaking seven.”

“It is normal to rise and fall,” the statement said. It promised to “maintain stable operation of the foreign exchange market.”

Chinese leaders have promised to avoid “competitive devaluation” to boost exports by making them less expensive abroad — a pledge the central bank governor, Yi Gang, affirmed in March. But regulators are trying to make the state-controlled exchange rate more responsive to market forces, which are pushing the yuan lower.

The U.S. Treasury Department declined in May to label China a currency manipulator but said it was closely watching Beijing.

That helps exporters cope with tariffs of up to 25% imposed by Trump on billions of dollars of Chinese goods. But it raises the risk of inflaming American complaints.

Trump rattled financial markets Thursday by announcing plans for 10% tariffs on an additional $300 billion of Chinese goods, effective Sept. 1. That would extend penalty duties to almost all U.S. imports from China.

The Treasury report in May urged Beijing to take steps “to avoid a persistently weak currency.”

A weaker yuan also might disrupt Chinese efforts to shore up cooling economic growth. It would raise borrowing costs by encouraging an outflow of capital from the world’s second-largest economy.

Globally, a weaker yuan might lead to more volatility in currency markets and pressure for the dollar to strengthen, Louis Kuijs of Oxford Economics said in a report. That would be “unwelcome in Washington,” where Trump has threatened to weaken the dollar to boost exports.

A weaker dollar “would be bad news” for Europe and Japan, hurting demand for their exports at a time of cooling economic growth, Kuijs said.

The Chinese central bank tried to discourage speculation last August by imposing a requirement that traders post deposits for contracts to buy or sell yuan. That allows trading to continue but raises the cost.

Beijing imposed similar controls in October 2015 after a change in the exchange rate mechanism prompted markets to bet the yuan would fall. The currency temporarily steadied but fell the following year.