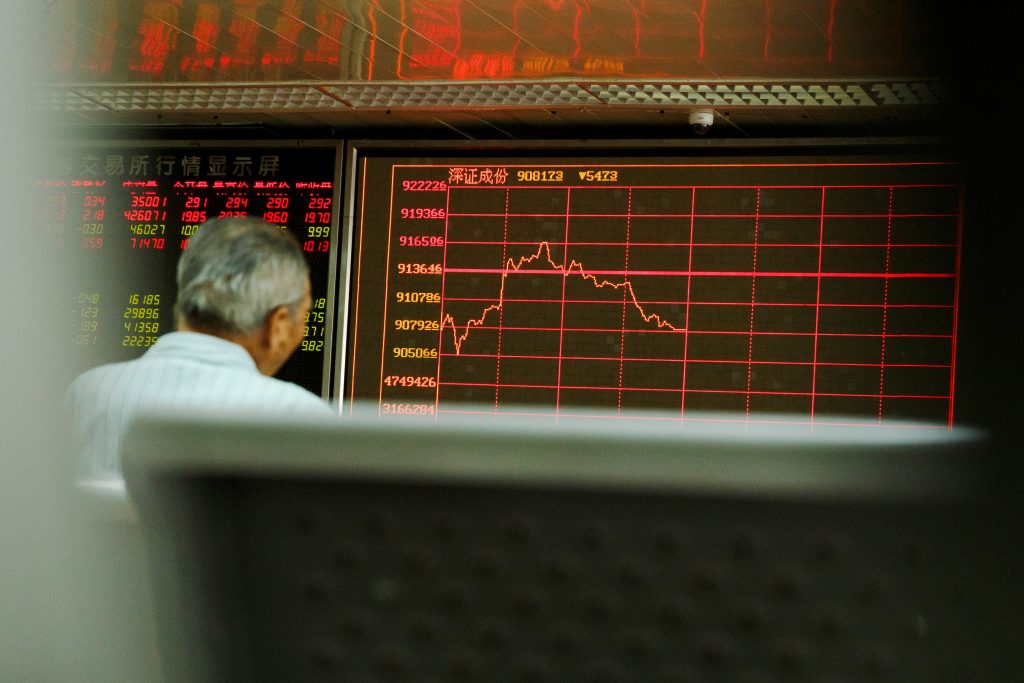 Asian shares suffered their steepest daily drop in 10 months on Monday, as Sino-U.S. trade friction sent the yuan slumping to a more than decade trough and stampeded investors into safe harbors including the yen, bonds and gold.

The panic is likely to spread to Europe and Wall Street with futures signaling sharp losses in their benchmark indices.

Markets have been badly spooked since U.S. President Donald Trump abruptly declared he would slap 10% tariffs on $300 billion in Chinese imports, ending a month-long trade truce. China vowed on Friday to fight back.

In response, China’s yuan burst beyond the psychological 7-per-dollar threshold in a move that threatened to unleash a whole new front in the trade hostilities – a currency war.

“Everything is selling off right now,” said Ray Attrill, head of forex strategy at National Australia Bank in Sydney. “We have no reason to expect any cessation in selling unless we see any strong action to defend any CNY or CNH weakness.”

“Our working assumption is that we are unlikely to see any meaningful resolution to the trade dispute anytime soon.”

Asian share markets were a sea of red with Japan’s Nikkei shedding 1.7% to the lowest since early June. It was the sharpest daily drop since March and led Japanese officials to call a special meeting to discuss market turmoil.

Australian shares slipped about 2% to spend their fourth straight session in the red, and South Korea’s Kospi tumbled 2.6% to hit its lowest since November 2016.

MSCI’s broadest index of Asia-Pacific shares outside Japan sank 2.5% to depths not seen since late January. That marked the biggest one-day percentage loss since early October.

In China, the blue-chip index fell 1% while the troubled Hong Kong market hit a seven-month trough.

The abrupt escalation capped a critical week for global markets after the U.S. Federal Reserve delivered a widely anticipated interest-rate cut and played down expectations of further easing.

So far, investors are not buying Fed Chairman Jerome Powell’s claim that the 25-basis-point rate reduction was a mere “mid-cycle adjustment to policy.”

Futures are now pricing in deeper cuts than before last week’s Fed meeting. The terminal U.S. rate is seen at 1.22%, 93 basis points below the current effective rate.

Analysts at TD Securities are forecasting no fewer than five more cuts from the Fed, amounting to 125 basis points of easing, over the coming year or so.

Bond markets were well ahead of the game as U.S. 10-year yields dived 7 basis points to 1.77%, a violent shift for usually cautious Asian hours. Yields in Australia and New Zealand touched all-time lows.

The flight to safety lifted the yen, which often gains at times of stress thanks to Japan’s position as the world’s largest creditor. The dollar slipped to a seven-month trough of 105.77 yen, while the euro sank to its lowest since April 2017 at 117.66 yen.

That dragged the dollar index off 0.1%, though it was up against most other Asian currencies and those exposed to China or commodities including the Australian dollar.

The Aussie, a liquid proxy for emerging market and China risk, slipped to a fresh seven-month trough at $0.6748 after losing 1.6% last week.

The Swiss franc was boosted by safe-haven demand from the escalating trade tensions. Trump is also eyeing tariffs on the European Union, but is yet to make any formal announcements. The euro was relatively steady on the dollar at $1.1125.

Sterling hovered near 2017 lows at $1.2119, pressured by concerns about Britain exiting the European Union without a deal in place.