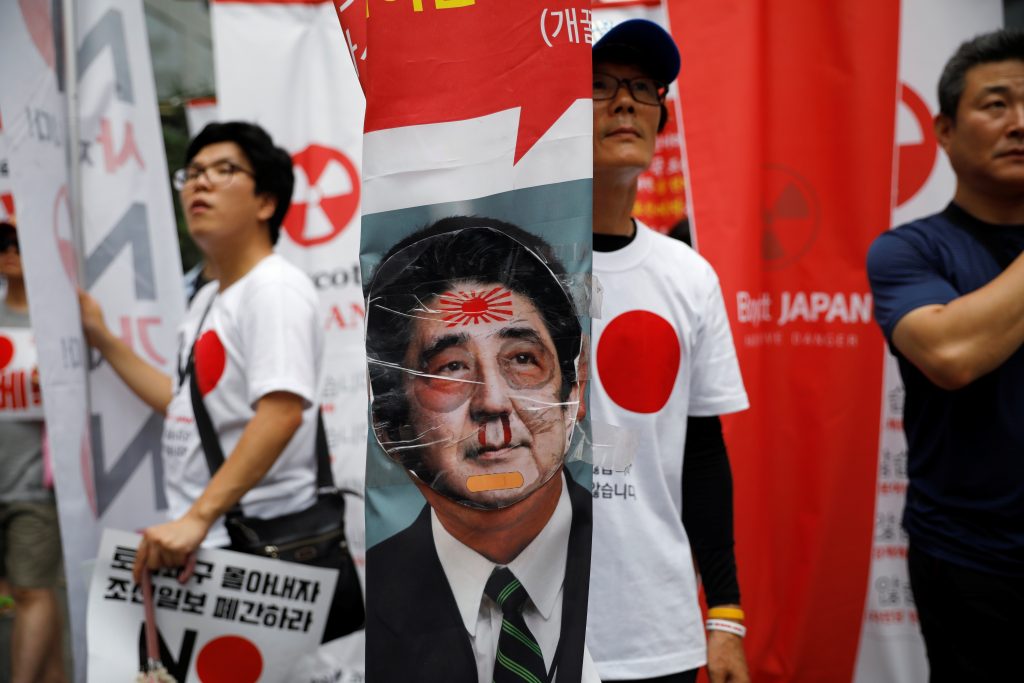 Japan on Friday escalated its trade war with South Korea by removing it from a list of trusted trading partners, furthering economic uncertainties in the midst of the U.S.-China trade dispute and raising concerns about the security implications of a rapidly eroding relationship between two key U.S. allies.

Japan’s Cabinet of ministers announced it was stripping South Korea of its so-called whitelist status, signaling potential delays and disruptions in exports to South Korea of thousands of products including auto parts, household electronics and machinery. The move came on top of export restrictions imposed in early July on three chemicals crucial to South Korea’s semiconductor industry, which in turn supplies many of the world’s biggest tech companies.

The move was met with outrage in South Korea, where the earlier trade measures have sparked large-scale boycotts of Japanese beer, clothing and travel to Japan as well as vocal protests lambasting Japanese Prime Minister Shinzo Abe. The latest tensions appear to mark a new low in relations between the neighboring countries, which have long been fraught with historic grievances dating to Japan’s colonization of Korea in the early 20th century.

The South Korean government announced Friday afternoon it would retaliate by removing Japan from its own whitelist of trading partners. South Korean lawmakers this week have also publicly discussed the possibility revoking a military information sharing agreement between the countries, which would add to an already precarious security situation in the region as North Korea ratchets up tensions with repeat weapons tests.

Early Friday, hours before Japan made its announcement, North Korea conducted its third weapons test in eight days, firing off two short-range ballistic missiles into the sea to its east, according to the South Korean military.

Even so, throughout the day, most of South Korea and Japan’s attention and barbs were trained on each other.

Japanese officials have said the decision was a national security matter, saying there was concern sensitive materials exported to South Korea may have ended up in places like Iran and North Korea, without pointing to specific cases. The three materials, used in the production of semiconductor chips and displays can also be used in chemical weapons or weapons of mass destruction.

Japan’s trade minister Hiroshige Seko said in a news conference Friday the move was not an embargo or a ban, and that the disruption of the global supply chain would be minimal.

The tech industry in the U.S. has said it fears otherwise. Six major trade associations including the Consumer Technology Assn. and the National Assn. of Manufacturers sent a letter last week to Seko and South Korea’s trade minister, Yoo Myung-hee, expressing worry that the complex and interdependent global tech supply chain could fall victim to the spat between the nations.

“Japan and South Korea are important players in these global value chains,” the groups wrote in the letter. “Non-transparent and unilateral changes in export control policies can cause supply chain disruptions, delays in shipments, and ultimately long-term harm to the companies that operate within and beyond your borders and the workers they employ.”

South Korean President Moon Jae-in, in a meeting with his Cabinet on Friday afternoon, called Japan’s decision “a selfish, destructive act that will cripple the global supply chain and wreak havoc on the global economy.”

“If Japan intentionally strikes at our economy, Japan itself will also have to bear significant damage,” he said.

Moon said Japan’s moves were “undeniable trade retaliation” arising from a South Korean court decision last fall, which ruled that Japanese companies must compensate South Korean laborers who were forced to work for the Japanese during World War II.

Japanese authorities have bristled at the ruling, saying such claims were all covered by a 1965 agreement and reparations normalizing relations between Japan and South Korea, and that the court decision reopening the matter broke the trust between the two nations.

The U.S., which in the past has nudged the countries to patch up relations during previous spats, has largely taken a back seat as the tensions simmered to a boil. This week, Secretary of State Michael R. Pompeo has been meeting with foreign ministers of both countries in Bangkok at the meeting of the Assn. of Southeast Asian Nations.

“We will encourage them to find a path forward,” he told reporters Tuesday. “We think it’s important. They’re both great partners of ours; they’re both working closely with us on our efforts to denuclearize North Korea.”