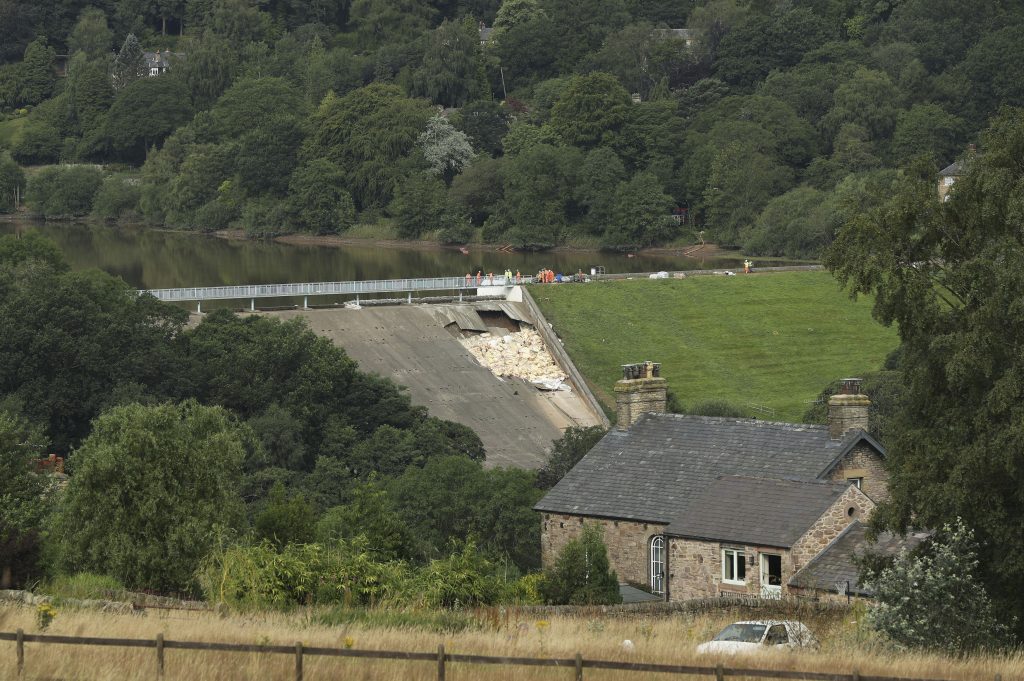 Heavy rain was forecast Sunday for the area around a damaged reservoir in northwest England as emergency crews raced to pump out water to prevent the dam from failing and a town from being flooded.

About 1,500 residents were evacuated from Whaley Bridge, a town 175 miles northwest of London, after part of the reservoir’s spillway gave way last week.

Another 55 homes were evacuated Saturday due to concerns about the weather and “the ongoing risk of the Toddbrook Reservoir breaching,” Derbyshire police said.

Police stopped allowing evacuated residents to stop by their homes for supplies, saying officers needed to focus on the pending storm and potential flooding.

“The attention of officers and other responders has to be on the preservation of life,” Derbyshire police said in a statement. “While there was an urgent need over the past 24 hours to allow residents back into the area, our first duty is to protect the lives of the public and emergency services.”

Forecasters said as much as 1.6 inches of rain could fall in one to two hours, according to Britain’s Met Office.

Since the dam was damaged last week from heavy rains that sent torrents of water rushing over the spillway, a Royal Air Force helicopter dropped some 400 one-ton bags of sand and gravel into a gaping hole in the spillway. Contractors worked to bind the bags together with concrete grouting.

Firefighters say 22 pumps were working around the clock to pull water out of the reservoir and into the River Goyt to ease pressure on the dam.

By late afternoon, police said the water level at the reservoir had been reduced by about 9.8 feet. Pumps continued to remove water at a rate of around 3.94 inches an hour.

“The dam is like a bowl. It doesn’t have straight sides. So as the water level drops, crews are having to relocate the pumps to ensure they are able to work as effectively as possible,” Derbyshire deputy fire chief Gavin Tomlinson said. “Our priority remains the same, to pump as much water out of the reservoir as possible, to protect the Whaley Bridge community from the risk of the dam failing.”