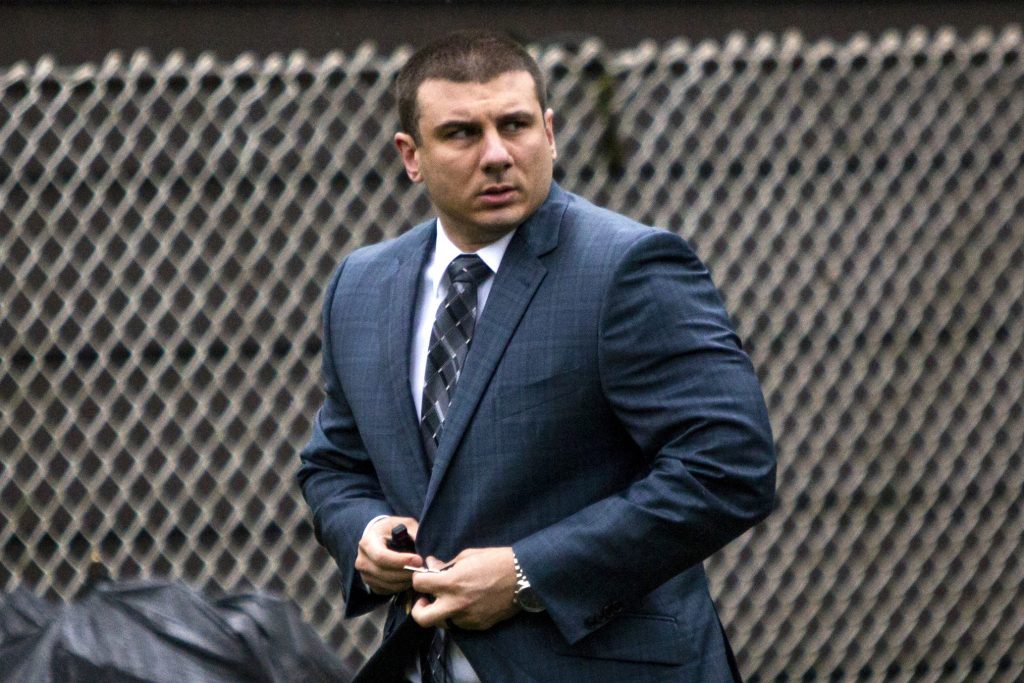 An administrative judge on Friday recommended firing the New York City police officer accused of using a chokehold in the 2014 death of an unarmed black man whose dying pleas of “I can’t breathe” became a rallying cry against alleged police brutality.

Soon after the recommendation became public, the police department suspended Officer Daniel Pantaleo, saying such a move was standard in disciplinary cases where termination has been recommended. But the decision over final punishment rests with Police Commissioner James O’Neill.

“All of New York City understandably seeks closure to this difficult chapter in our city’s history,” said the NYPD’s Deputy Commissioner for Public Information, Phillip Walzak, in a statement. “Premature statements or judgments before the process is complete however cannot and will not be made. In order to protect the integrity of the trial proceedings and conclusion, the NYPD will not comment further until the Police Commissioner makes the final determination.”

The judge’s findings in Pantaleo’s disciplinary case were provided to his lawyer and the city agency that acted as a prosecutor at his department trial last spring.

“Today’s decision confirms what the Civilian Complaint Review Board always has maintained: Officer Daniel Pantaleo committed misconduct on July 17, 2014, and his actions caused the death of Eric Garner,” said Fred Davie, chairman of the review board that served as the prosecutor.

Pantaleo’s lawyer and the prosecutor will have about two weeks to submit final comments before O’Neill makes his decision.

The administrative judge, NYPD Deputy Commissioner of Trials Rosemarie Maldonado, had been tasked with deciding whether Pantaleo used a banned chokehold to take Eric Garner to the ground during a tense confrontation on a Staten Island street.

Pantaleo’s lawyers had argued that he used an approved “seat belt” technique to subdue Garner, who refused to be handcuffed after officers accused him of selling untaxed cigarettes.

Videos taken by bystanders showed Garner crying out “I can’t breathe” at least 11 times before he fell unconscious. The medical examiner’s office said a chokehold contributed to Garner’s death.

The head of the Police Benevolent Association, the city’s largest police union, called the judge’s recommendation “purely political insanity” and warned that if O’Neill fires Pantaleo it will paralyze the department.

“He knows the message that this decision sends to every cop: We are expendable, and we cannot expect any support from the city we protect. He knows that if he affirms this horrendous decision, he will lose his police department,” PBA President Patrick J. Lynch said.

Garner’s mother, Gwen Carr, said the judge’s report brought her “some relief” but was overdue and fell short of true accountability.

“It’s past time for Mayor Bill de Blasio and the NYPD to end their obstruction, stop spreading misleading talking points and finally take action for my son,” she said in a statement.

The Rev. Al Sharpton, appearing with two of Garner’s children, called on the police commissioner to “immediately and unequivocally accept the recommendation of the judge and do it right away.”

Last month, the day before the fifth anniversary of Garner’s death, federal prosecutors announced they would not bring criminal charges against Pantaleo, 33, following a five-year civil rights investigation.

Pantaleo initially tried to use two approved restraint tactics on Garner, much larger at 6-foot-2 and about 400 pounds, but ended up wrapping his arm around Garner’s neck for about seven seconds as they struggled against a glass storefront window and fell to the sidewalk.

The officer was stripped of his gun and put on desk duty after the incident, but continued to draw a hefty salary since Garner’s death, with his pay peaking at more than $120,000 in 2017, according to city payroll records.

When a Staten Island grand jury declined to indict Pantaleo on state charges in December 2014, demonstrations flared in New York and several other cities.

Garner’s death has dogged Mayor Bill de Blasio since it happened in his first year in office.

His initial statements after the death were critical of the officers involved, and he talked publicly about having had to warn his own son, whose mother is black, to be careful during any encounters with police. Then, as protests flared, a disturbed man angry about the Garner and Brown cases ambushed and killed two New York City police officers as they sat in their cruiser.

The head of the city’s largest police union said the mayor had “blood on his hands” over the killings. Police officers turned their backs on the mayor at the officers’ funerals.

De Blasio, now running for president, wound up infuriating police-reform advocates, too, by allowing the department to wait for years to begin disciplinary proceedings against Pantaleo. The delay was due to the city’s desire to avoid interfering in the ongoing federal civil-rights investigation.

The disclosure of Maldonado’s decision came about two months after the end of Pantaleo’s department seven-day trial. Sgt. Kizzy Adonis, the supervising officer at the scene, faces a department trial, but it hasn’t been scheduled.