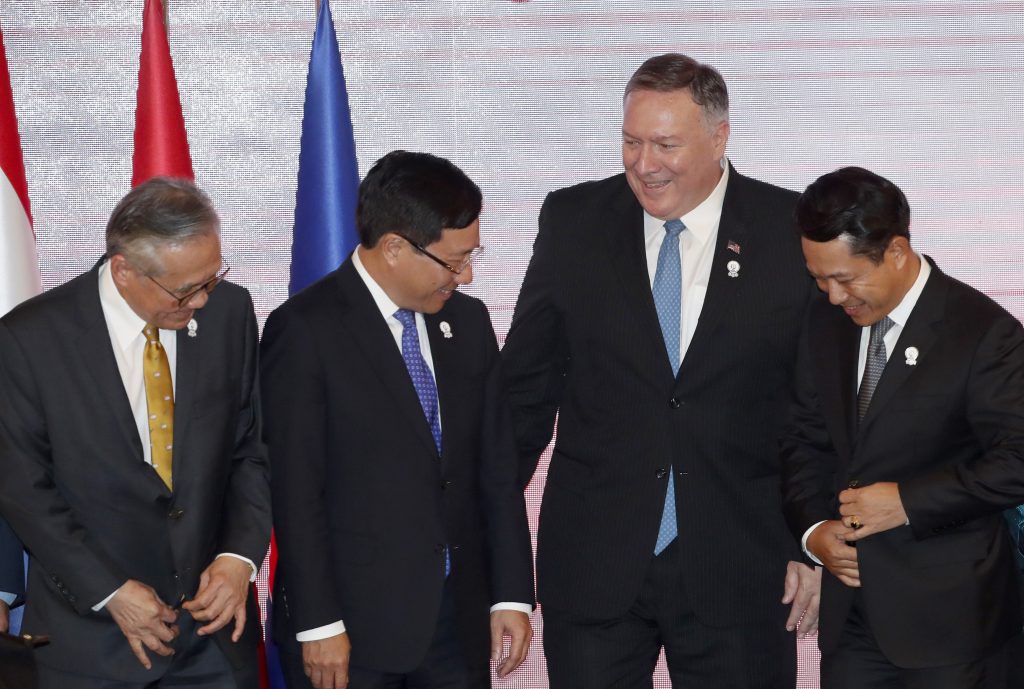 Secretary of State Mike Pompeo said Thursday that Washington isn’t asking any Asian nation to take sides as it engages with the region where China is battling for influence and aggressively expanding territorial claims in the South China Sea.

Pompeo hailed an Indo-Pacific engagement framework adopted by the leaders of the Association of Southeast Asian Nations in June, saying it supports sovereignty, transparency, good governance and a rules-based order among other things.

U.S.-China rivalry fueled by their trade disputes has put the 10-member bloc in a tight spot and the new framework is aimed at finding a middle ground to keep on the good side of both Washington and Beijing.

“Look, we don’t ever ask any Indo-Pacific nations to choose between countries. Our engagement in this region has not been and will not be a zero sum exercise. Our interests simply naturally converge with yours to our mutual benefit,” Pompeo said in a speech at an annual meeting with his ASEAN counterparts.

U.S. relations with ASEAN are guided by a shared commitment to the fundamental rules of law, human rights and sustainable economic growth, he added.

Beijing attempts to project its influence globally through its “Belt and Road” initiative, an ambitious development program of major infrastructure projects, while Washington is promoting its own vision strategy for a Free and Open Indo-Pacific, which Beijing regards as directed against it.

Despite Pompeo’s comments in Bangkok, he and other Trump administration officials have for months been raising the alarm about the dangers of allowing significant Russian and Chinese investment in their technology and infrastructure sectors.

On a tour of Europe earlier this year, Pompeo told Poland, Hungary and Britain among others to shun the Chinese telecoms giant Huawei, warning that the U.S. may be forced to limit intelligence cooperation with them if they go ahead with 5G projects run by the company. In Latin America, Pompeo and others have said Chinese development investment and assistance will come with a price, maintaining that the country seeks to enrich only itself with predatory practices.

Pompeo’s comments Thursday came a day after China warned outside nations against any attempt to sow discord between Beijing and ASEAN countries by playing up disputes over the South China Sea.

Chinese Foreign Minister Wang Yi said after talks with ASEAN countries on Wednesday that any differences can be resolved among the parties themselves. He also reaffirmed Beijing’s commitment to conclude a Code of Conduct with ASEAN governing the South China Sea that will make the disputed region more stable.

China’s assertive territorial claims in the South China Sea, which carries a third of global shipping, has drawn rebuke from the United States and become a flashpoint for the region, with some sea features under overlapping claims by ASEAN members Vietnam, the Philippines, Malaysia and Brunei.

Wang told reporters Thursday after talks with Pompeo on the sidelines of the ASEAN meetings that they both exchanged views on how to advance bilateral ties “defined by coordination, cooperation and stability.”

“Secretary Pompeo made it very clear that neither President [Donald] Trump nor the U.S. administration has the intention to contain China’s development. The United States hopes to see smooth progress in Sino-U.S. economic and trade consultation,” he said.

Wang said Pompeo also told him that the U.S. is ready to restart the working-level consultations with North Korea anytime despite the North’s recent weapons test.

“China expressed the hope that a proper environment and conditions should be fostered for resumption of such consultations” and that both sides could “accommodate each other’s legitimate concerns,” Wang said.

Talks have been stalled since Trump and North Korean leader Kim Jong Un’s summit in February in Hanoi broke up over disagreements about sanctions relief and what actions the North would have to take in exchange. But they agreed to restart the talks when they met at the Demilitarized Zone separating the two Koreas in June.

The North has conducted two short-range ballistic missile tests in the past week and the two sides remain at odds on a definition of denuclearization.