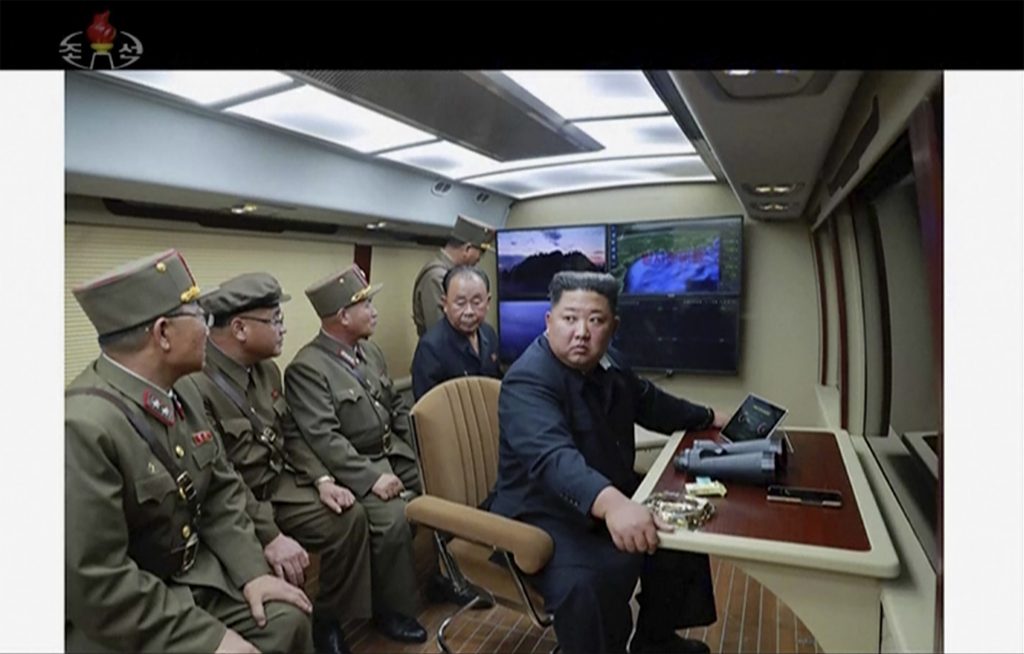 The report by North Korea’s official Korean Central News Agency differed from the assessment by South Korea’s military, which had concluded Wednesday’s launches were of two short-range ballistic missiles.

The launches from the eastern coastal town of Wonsan were North Korea’s second weapons test in less than a week and were seen as a move to keep up pressure on Washington and Seoul amid a stalemate in nuclear negotiations. Pyongyang has also expressed anger over planned U.S.-South Korea military drills.

KCNA said Kim expressed satisfaction over the test firing and said the newly developed rocket system would soon serve a “main role” in his military’s land combat operations and create an “inescapable distress to the forces becoming a fat target of the weapon.”

The report didn’t directly mention the United States or South Korea, but experts say the rocket system, along with new short-range missiles the North tested last week, could potentially pose a serious threat to South Korea’s defense. North Korea places thousands of rocket launchers and artillery pieces near its border with South Korea, and its perceived ability to quickly devastate the Seoul metropolitan area, where about half of South Koreans live, has been a central part of its strategy to deter military action from its rivals.

South Korea’s Joint Chiefs of Staff said Wednesday that the weapons it assessed as missiles flew about 155 miles at an apogee of 19 miles, a range that would be enough to cover the region surrounding Seoul and a major U.S. military base just south of the city.

Kim Dong-yub, an analyst from Seoul’s Institute for Far Eastern Studies, said the North might have tested an improved version of its 300-millimeter multiple rocket launcher system or an entirely new system, such as 400-millimeter rockets.

When asked whether it failed to distinguish between multiple-rocket launchers and ballistic missiles, the JCS said South Korean and U.S. militaries shared an assessment that the flight characteristics from Wednesday’s launches were similar to North Korea’s new short-range missiles tested last week. JCS official Kim Joon-rak said further analysis was needed to identify the weapons.

South Korea’s military had said the flight data of the missile launched last week showed similarities to the Russian-made Iskander, a solid-fuel, nuclear-capable missile that is highly maneuverable and travels on lower trajectories compared to conventional ballistic weapons.

Choi Hyun-soo, spokeswoman of Seoul’s Defense Ministry, refused to answer when asked whether it’s possible that the North might have mixed in a ballistic missile launch while testing its new rocket system.

In a closed-door briefing to lawmakers, officials from South Korea’s National Intelligence Service said North Korea might extend its weapons tests into August. The spy agency believes the North would want to demonstrate its displeasure over the planned U.S.-South Korea military exercises and the South’s acquisition of advanced weapons such as F-35 fighter jets while also speeding up its own weapons development before it gets deeper in nuclear negotiations with the United States, lawmaker Lee Eun-jae said.

U.S. officials have downplayed the threat of the launches to the United States and its allies.

Analysts say North Korea, with its consecutive weapons tests, is demonstrating displeasure with the pace of nuclear diplomacy with Washington. The North’s testing activity could intensify if the negotiations do not proceed rapidly over the next few months, said Srinivasan Sitaraman, a North Korea expert at Clark University in Massachusetts.

By firing weapons that directly threaten South Korea but not the U.S. mainland or its Pacific territories, North Korea also appears to be dialing up pressure on Seoul and testing how far Washington will tolerate its bellicosity without actually causing the nuclear negotiations to collapse, other experts say.