Getting Klal Yisrael on the Same Page — Daf Yomi in Chicago

It happens once in seven and a half years, and it captures the hearts and minds of Klal Yisrael worldwide. Thousands of Yidden joining together to celebrate the culmination of an endeavor which is relentless. It does not pause for snow, for heat, for storms, nor for Erev Pesach, Tishah B’Av or Yom Kippur. Weddings, bar mitzvahs, brissim, and (lo aleinu) shivah does not impede its progress.

As Klal Yisrael prepares to celebrate the 13th Siyum HaShas of Daf Yomi, Hamodia will discuss some of the challenges, triumphs and the perseverance needed with a variety of Maggidei Shiur and lomdim of Daf Yomi. Join us as we pull back the curtain on the accomplishments of these heroic yet everyday Yidden as they near the end of this undertaking.

Or better yet, join them!

Rabbi Avraham Shimon Moller has been involved in the world of chinuch for three decades. For the past 10 years, he has served as the superintendent of the Associated Talmud Torahs of Chicago, a central agency for all Orthodox schools in the city. Rabbi Moller begins each morning delivering a Daf Yomi shiur to his loyal participants who awaken to savor a blatt gemara long before others start their morning. On occasion, when he is out of town and unable to say the shiur, Rabbi Aaron Karman ably substitutes for Rabbi Moller, allowing the participants to keep pace with the Daf Yomi cycle throughout the year.

How many cycles have you learned and taught Daf Yomi?

Rabbi Moller: This is my second cycle completing Shas by learning the Daf. I began nearly 15 years ago, when I would say an Amud Yomi shiur each day in my shul. The members of the shul decided that they wanted to begin learning Daf Yomi, and I became the Maggid Shiur. We are now completing our second round, and it has been a most rewarding experience.

Are the participants the same? Have any been added, or have any moved on? 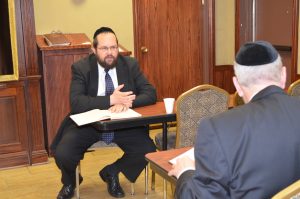 When does the shiur take place?

We meet in Congregation Chesed L’Avrohom, The Chicago Center for Torah and Chesed under the leadership of Harav Yehoshua Eichenstein, shlita, the Zidotchover Rebbe, and his son, Harav Zalman Leib. The shiur is given every weekday for 40 minutes, from 5:50 a.m. until 6:30 a.m. Although we do not meet on Shabbos, we make up for it on Sunday when the shiur is double, for an hour and 20 minutes. On Yom Tov, we try to meet extra on Chol Hamoed or on Yom Tov Sheini, and this helps us catch up on the blatt we miss during the first days of Yom Tov.

During the winter, as we leave our homes to come to the shiur, it is pitch black outdoors. Sometimes, you think, “It’s still the middle of the night! What am I doing outdoors in the cold?” But when we arrive and begin learning, all those thoughts disappear as we get involved in the blatt.

There are certain times of year which also present challenges. Before Yom Tov, when people are busy, and it is sometimes difficult. But we persevere and we manage to catch up.

When someone learns consistently, the daily blatt becomes part of your life, and you make sure not to miss it.

How do you prepare for your shiur?

I have a chavrusa who I learn with each day. Truthfully, this is the best part of my day, as I work through the blatt and try to get it clear enough to give it over the next morning. When I deliver the shiur and it comes out clear, all the work we put into it seems worthwhile. It keeps getting better and better.

Although there are times when I have to travel and the shiur is delivered by my trustworthy substitute, nevertheless I still prepare the Daf with my chavrusa over the phone. It is such an integral part of my daily routine that I won’t miss it just because I am not in Chicago.

When I remember something from another sugya and I can apply it in a different place, I feel that the learning is all coming together. Also, when I learned certain sugyos in yeshivah, and we spent many weeks on a particular aspect of the sugya, at times I felt that I was only seeing the trees and not the entire forest. When learning Daf Yomi, I get to see the entire hekef (scope) of the gemara. The more often that I learn a piece, the clearer it becomes, the more it clicks and the more it makes sense.

How do you respond when a participant asks a good question for which you do not have an answer?

I’m comfortable saying that it is a good question and I will have to get back to you. Over the next day, I will research it to find a solution. There are many resources available today, including many different types of Shas which contain a digest of material and sources. In addition, there are so many people learning Daf Yomi that I can approach and ask if they have a way to answer the question. More often than not, one of my chaverim will supply me with an appropriate response to the kushya. This, too, is part of the beauty of learning Daf Yomi together with Klal Yisrael.

We began discussing the plans for our upcoming siyum, and there have been a few emails back and forth, but my loyalty is to the members of the shiur. If they decide to go to the Siyum HaShas in Metlife Stadium, I will be joining them. If they choose to celebrate here in Chicago, I’ll be here with them. We spent seven and a half years together working on this monumental accomplishment, and we hope to end this cycle, and begin the next cycle, as one chaburah.

Rabbi Aaron Karman, a kashrus mashgiach for the Orthodox Union, substitutes for Rabbi Moller when he is away.

How many times have you completed Shas with the Daf Yomi cycle?

Rabbi Aaron Karman: This will, iy”H, be the third time I completed Shas, learning Daf Yomi together with so many other members of Klal Yisrael.

How much time do you spend learning Daf Yomi?

I spend one hour each day in the morning. I began learning with a chavrusa, and we had a difficult time keeping up. I asked Rabbi Reuven Levitan, who learned Daf Yomi during second seder with Harav Avraham Chaim Levin, zt”l, the Rosh Yeshivah of Telshe-Chicago, how they were able to keep pace. He told me that they made up that each Sunday, they would begin the blatt where Daf Yomi was holding that day. If they had fallen behind during the previous week, it was their responsibility for “homework” to catch up over Shabbos and be ready Sunday afternoon to resume wherever the Daf was holding.

I thought this was a wonderful idea, and I instituted this with my chavrusa. This plan forced me to utilize my time over Shabbos to the maximum in order to be up to date by Sunday. My chavrusa, however, was unable to keep to this regimen, and I was forced to learn other topics with my chavrusa.

In fact, when Daf Yomi began the last cycle with Maseches Brachos, I was in Toronto for the wedding of my brother-in-law. I dropped in by a shiur which was learning with Dirshu, and I was blown away by the way the Maggid Shiur not only covered every Rashi on the blatt, but indeed went through every Mishnah Berurah connected with the gemara. I decided to join the Dirshu chaburah in Chicago so I could gain from the way they concentrate on owning the gemara they learn.

As far as learning Daf Yomi, I kept to the way that Rav Levin learned with his chavrusa, and sometimes I end up learning five blatt over the weekend in order to keep pace. I have more time on Shabbos and Sunday, and I can learn more and faster.

Was there any time that you were discouraged and considered abandoning Daf Yomi?

Six years ago, when my mother, a”h, passed away, I fell behind 10 blatt during the week of shivah. We were learning Maseches Eruvin, a difficult masechta, at the time, and I felt there was no way I would be able to catch up. But my daughter got married soon after, and I had planned to make the siyum on Eruvin at a sheva brachos. So I forced myself to learn those 10 blatt during every free moment I had, and with siyatta diShmaya I was able to complete it in time.

What was your most rewarding moment?

I live in Chicago and my parents and siblings all live in New York. When I made my first siyum, my entire family flew out to Chicago to join in the simchah, which was very special. It was like a chasunah. My father was suffering from Parkinson’s, so the trip was strenuous, but he insisted on coming. It was a day that I will always remember and cherish.

How often do you say the Daf Yomi shiur?

I substitute for Rabbi Avraham Shimon Moller whenever he is out of town, which is usually about once in every two months. This usually entails covering his shiur from Thursday through Sunday. If he is away for a chasunah, it can sometimes stretch to an entire week.

What do you do when a participant in the shiur asks a question which you did not anticipate?

I try very much to stick to the pshat and not to get embroiled in pilpul, so if I prepare correctly, I usually have the sugya clear enough to explain the pshat. Nevertheless, at times even pshat can have a kushya, and I will try to get an answer by the next day.
I remember that I once said a shiur and one participant read off an explanation from one of the annotated gemaros, and asked a strong question. I reviewed the gemara according to the simple pshat as I had learned it, and the question just fell away. So in that respect, Daf Yomi allows you to keep it simple, and avoid getting involved in complicated aspects of the sugya.

I plan to come in for the Siyum HaShas that is planned at Metlife, but I also plan to celebrate it in a personal way as well. Since the siyum is to be held around Chanukah time, and my father’s yahrtzeit is on Zos Chanukah (the last day of Chanukah), I plan to make my personal siyum on that day. It will be somewhat reminiscent of the first siyum I made, when my parents, z”l, and ybl”c, my family, came to Chicago to rejoice with me.