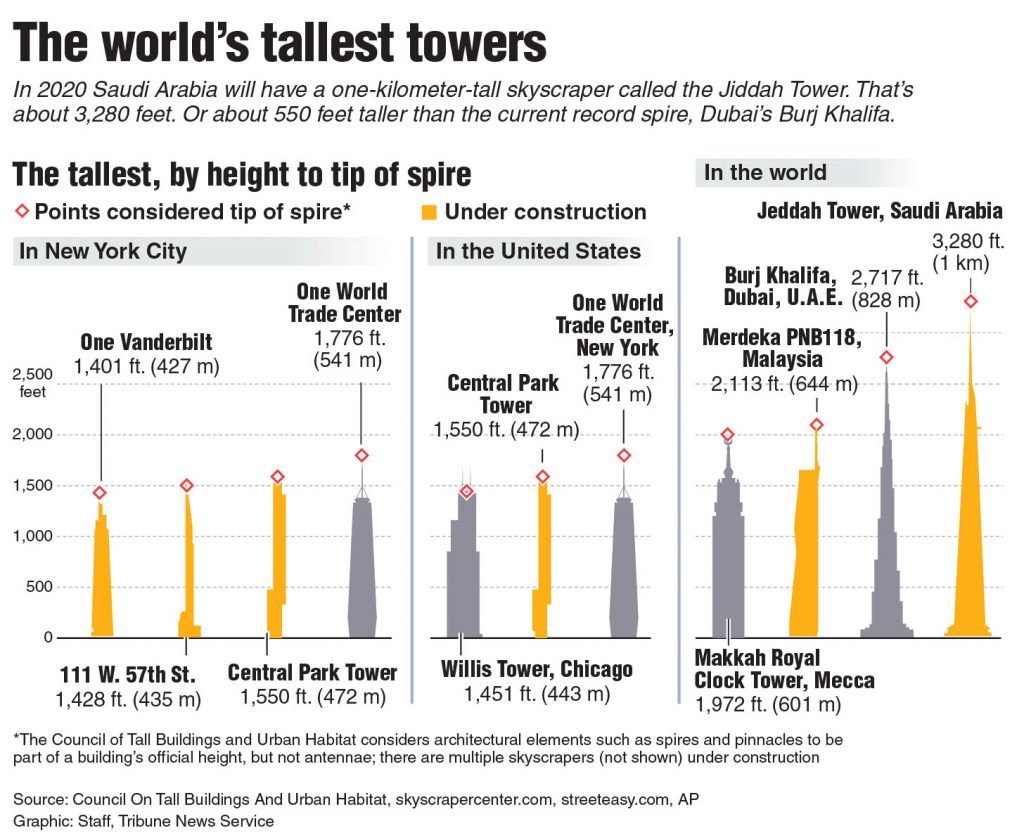 Chicago’s Willis Tower, which was dethroned five years ago by One World Trade Center as the tallest building in North America, just lost its unofficial title as the highest roof in North America to another New York skyscraper, Central Park Tower, which is still under construction.

Willis Tower tops out at 1,451 feet at its parapet — for all practical purposes, the roof. Central Park Tower reportedly surpassed that mark this week on its way to 1,550 feet.

“It’s not really a statistic that we track,” said Daniel Safarik, a spokesman for the Council on Tall Buildings and Urban Habitat, a Chicago-based not-for-profit organization that maintains rankings on the world’s tallest buildings. “But the ultimate architectural height of the Central Park Tower roof is about 100 feet higher.”

Extell, the New York-based developer behind Central Park Tower, was not immediately available Wednesday to verify that the rising luxury condo building was now taller than Willis. But when completed, it will undeniably surpass Willis Tower’s last official vertical claim to fame — the highest occupied floor in North America, according to the council.

“We don’t formalize that until Central Park Tower is actually completed, but it’s on track to do so,” Safarik said.

The council uses three measurements to rank tall buildings: height to architectural top, occupied floor and tip. The standard and most widely used ranking is architectural height — from the base to the top, including spires, but not antennas.

When Willis Tower, formerly Sears Tower, opened in 1973, it was the world’s tallest building at 1,451 feet, a title it held until 1996. It hung on to the title of tallest building in North America until 2014, when a controversial decision by the council handed the crown to the newly completed One World Trade Center, despite the fact that the building’s architectural height of 1,776 feet was bolstered by a roughly 400-foot spire.

There was even some heated debate as to whether One World Trade Center’s spire was actually an antenna, Safarik said.

“That’s probably one of the most controversial decisions we’ve made,” Safarik said.

Designed by Chicago architecture firm Adrian Smith + Gordon Gill, Central Park Tower is a mixed use residential and retail tower with a planned height of 1,550 feet. Once completed, it will be the second-tallest building in North America and the tallest residential building in the world, according to the council.

Willis Tower remains the 17th tallest building in the world, according to the latest rankings.