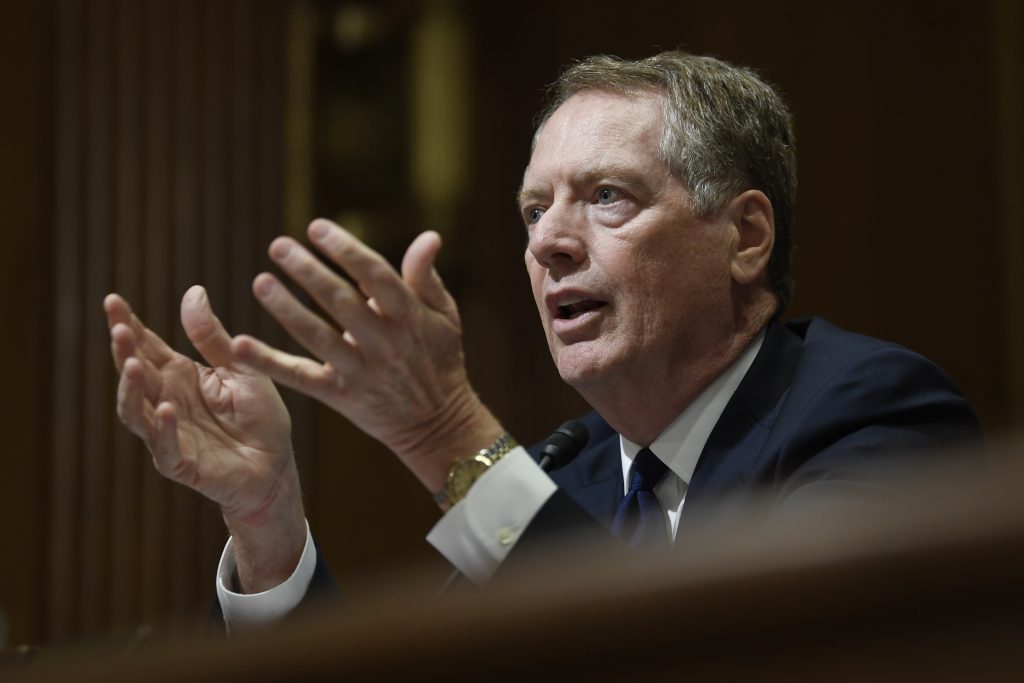 Congressional Democrats appear to be moving from “no way” to “maybe” on President Donald Trump’s rewrite of a trade pact with Canada and Mexico.

House Democrats have met four times with U.S. Trade Representative Robert Lighthizer, most recently on Friday, and both sides say they are making progress toward a deal that would clear the way for Congress to approve President Trump’s U.S.-Mexico-Canada Agreement, or USMCA.

Democratic Rep. Earl Blumenauer of Oregon, who heads a House subcommittee on trade, declared a couple of months ago that there was “no way” Democrats and the administration could bridge their differences. Lately, he’s reconsidered. “In the course of the last two months, we have seen significant progress,” Blumenauer said.

Negotiators so far have not offered details on where they’re making progress. Democrats want the agreement to include stronger protections for workers and the environment. They also are seeking to jettison a provision they see as a giveaway to big pharmaceutical companies.

Talks could still fall apart. Meetings between congressional staffers and officials from Lighthizer’s office during Congress’ August recess could prove critical. House Democrats working on USMCA will submit text next week to the administration “memorializing the concrete and detailed proposals that we have made.”

They called on the administration to do the same.

“It is time for the administration to present its proposals and to show its commitment to passing the new NAFTA and delivering on its own promises,” the Democratic lawmakers said.

Supporters of USMCA are pushing for a deal before the 2020 election campaign heats up, which could make it harder for Democrats and Republicans to compromise.

A senior administration official, who spoke on condition of anonymity to discuss internal deliberations, said there was growing optimism within the administration about USMCA’s prospects amid signs that House Speaker Nancy Pelosi was willing to work toward a compromise.

“The smart money in Washington is that USMCA will pass this fall following a bargain,” said Daniel Ujczo, a lawyer with Dickinson Wright in Columbus, Ohio, who specializes in North American trade. “However, it is just as likely that we will be in a ‘bump and blame’ scenario where the president can blame Speaker Pelosi and Speaker Pelosi can blame the president.”

By ratifying the agreement, Congress could lift uncertainty over the future of U.S. commerce with its No. 2 (Canada) and No. 3 (Mexico) trading partners last year, and give the U.S. economy a modest boost. U.S. farmers are especially eager to make sure their exports to Canada and Mexico continue uninterrupted.

Rep. Cheri Bustos of Illinois, who oversees efforts to get Democrats elected to the House, said Pelosi “understands the sense of urgency” about USMCA among some lawmakers who represent rural districts.

“The hope is that we can get to a yes,” Bustos said. “But first and foremost, it has to look out for working men and women in our country.”

The USMCA is meant to replace the 25-year-old North American Free Trade Agreement, which eliminated most tariffs and other trade barriers between the U.S., Mexico and Canada. Critics — including Trump, labor unions and many Democratic lawmakers — called NAFTA a job killer for America because it encouraged factories to move south of the border, take advantage of low-wage Mexican workers and ship products back to the U.S. duty free.

Lighthizer last year negotiated a do-over with Canada and Mexico. But it requires congressional approval.

He sought to reach a deal that would win over Democrats. It includes provisions designed to nudge manufacturing back to the United States. For example, it requires that 40% to 45% of cars eventually be made in countries that pay autoworkers at least $16 an hour — that is, in the United States and Canada and not in Mexico.

Democrats are also lined up against a provision of USMCA that gives pharmaceutical companies 10 years’ protection from cheaper competition in a category of ultra-expensive drugs called biologics, which are made from living cells. Shielded from competition, critics warn, the drug companies could charge exorbitant prices for biologics.

But supporters note that the U.S. already gives biologics 12 years of protection (versus eight years in Canada and five in Mexico). They also argue that pharmaceutical companies need an incentive to develop the drugs before copycat competitors sweep into the market and siphon away profits.

Congress is supposed to give trade agreements an up-or-down vote, no amendments allowed.

The reality is different. Despite those so-called fast-track provisions, Congress has managed to pressure past administrations into making changes to the last four U.S. free-trade agreements before approving them.

The trade pact picked up some momentum after Mexico in April passed a labor-law overhaul required by USMCA. The reforms are meant to make it easier for Mexican workers to form independent unions and bargain for better pay and working conditions, narrowing the gap with the United States.

Mexico ratified USMCA in June. But Democrats are also watching whether Mexico budgets enough money later this year to provide the resources needed for labor reform.

In Washington, lawmakers are getting pressure from all sides. Business and farm groups want the new deal approved as soon as possible.

“Getting this done is our top policy priority,” Thomas Donohue, chief executive of the U.S. Chamber of Commerce, told reporters last week.

Meanwhile, labor, environmental and other activist groups last month declared a “No Vote Until NAFTA 2.0 is Fixed” day and collected 300,000 signatures on petitions demanding changes to the trade pact.

Trump has repeatedly threatened to withdraw from the existing NAFTA — it remains in effect — if Congress won’t OK his version. But analysts say that pulling out of NAFTA would squeeze automakers and farmers. Farmers are already hurting from Trump’s trade war with China, which has imposed tariffs on soybeans and other U.S. agricultural products in retaliation for U.S. import taxes.

“The president knows that his voters here in the heartland and manufacturing Midwest cannot take another hit — we hope,” Ujczo said.