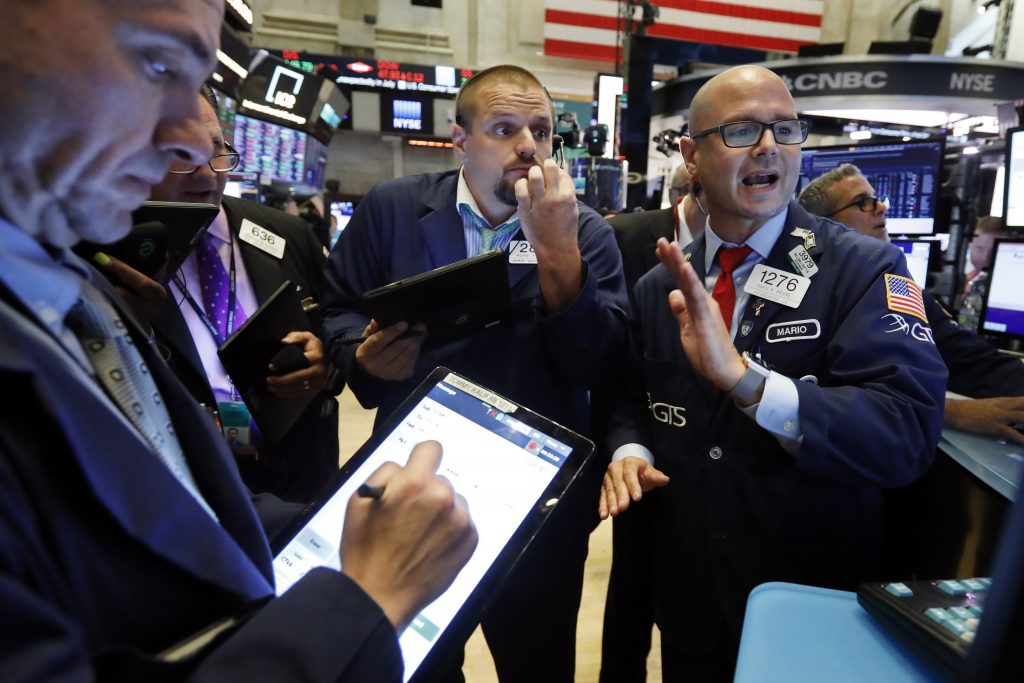 The modest slide came after President Donald Trump ramped up criticism of China just as negotiators began a new round of talks in the nations’ long-running and costly trade dispute.

Investors were also wading through a heavy flow of corporate earnings reports. Mixed or disappointing reports from Under Armour, Corning, HCA and Beyond Meat weighed on the market. Shares in Apple, which was due to report its financial results later Tuesday, were also lower.

Technology stocks accounted for the biggest share of the selling. Gartner led the sector decline, tumbling 19.5% after the research company cut its earnings and revenue guidance.

Health-care, financials, consumer discretionary and communications services stocks also pulled the market lower. Pfizer slid 6.4% a day after it announced a deal with Mylan. Capital One slumped after reporting a data breach.

Beyond earnings and trade, investors were looking ahead to other potentially market-moving events this week, including a Federal Reserve meeting that is expected to result in a rate cut on Wednesday and a government jobs report on Friday.

TRADE TROUBLES: The lingering trade war between the U.S. and China has been cutting into corporate profit for some industries all year and has investors concerned that it will continue to crimp business investment and growth. Delegates from the U.S. and China are meeting in Shanghai this week in the latest round of negotiations, months after the trade spat escalated with more tariffs.

In a series of tweets, President Trump claimed China is trying to hold off on an agreement until after the next U.S. elections. Trump threatened to get “much tougher” with China on trade if he wins in 2020.

THE BIGGER PICTURE: The broader market is pulling back from record highs last week, but indexes are still poised to close July with solid gains. The S&P 500 is up 2.3% for the month and the Nasdaq is up 3.3%. The Dow is up 2.1%.

THE GOODS: Procter & Gamble rose 4.1% after the consumer goods company solidly beat profit and revenue forecasts for the fourth quarter. The maker of Charmin toilet paper and Tide laundry detergent reported growth in almost every category, including its key home care and beauty products segment.

WHAT’S IN YOUR DATA? Capital One Financial fell 7.3% after the bank said a hacker gained access to the personal information of more than 100 million people.

WEAK ARMOR: Under Armour plunged 12.6% after the sports apparel company’s revenue fell short of Wall Street forecasts. It also expects a slight sales decline in North America this year and its overall profit forecast for 2019 is weaker than analyst forecasts.

STILL HUNGRY: Beyond Meat fell 9.6% after the plant-based burger maker reported a bigger loss than Wall Street anticipated during the second quarter and announced a stock sale. The loss and secondary stock offering overshadowed solid sales results and an increased sales forecast.

DULL BITS: McDermott International plunged 35.4% after the offshore drilling company slashed its financial forecast and told investors it will register a loss in 2019. The company cited weak operating results during the second quarter and lower revenue as key factors for the shift.