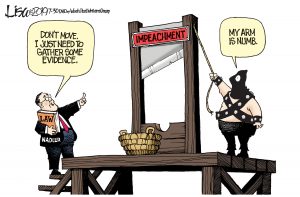 Like many other congressional districts that have been carefully chiseled out to try to ensure a specific electoral result, New York’s 10th District consists of a curious mix of neighborhoods. It includes parts of Manhattan’s Upper West Side, Chelsea, SoHo, Greenwich Village, TriBeCa, the Financial District and Battery Park City. It also crosses the border into Brooklyn, taking in Red Hook, Sunset Park, Bensonhurst, Dyker Heights and Gravesend — as well as parts of Boro Park and Kensington.

All in all, with the notable exception of the latter two neighborhoods, the district is overwhelmingly liberal, which is why its constituents overwhelmingly re-elected Jerrold Nadler to represent them for a fourteenth full term last year. Nadler has never made a secret of his far-left views on a host of vital matters, including moral issues, and has repeatedly taken positions that have been anathema to the Torah community.

When the Democrats took control of Congress following the most recent elections, Nadler became chairman of the House Committee on the Judiciary, giving him a powerful perch from which to wage war against President Donald Trump.

Following last week’s halting testimony by former special counsel Robert Mueller — which proved to be a significant disappointment for the president’s political opponents —the House of Representatives recessed Friday for a rather undeserved six-week summer break. This didn’t hold back the House Judiciary Committee from filing a fresh lawsuit Friday, arguing that they need documents from the Trump administration as they pursue questions of impeachment.

On Sunday, Nadler upped the ante.

“He richly deserves impeachment. He has done many impeachable offenses. He’s violated the law six ways from Sunday,” he told CNN. “The question is: Can we develop enough evidence to put before the American people? We’ve broken the logjam.”

(While the precise origin of the idiom “six ways from Sunday” is said to be unknown, in contemporary parlance it means something along the lines of “in every way possible.”)

Mr. Nadler has no doubt whatsoever about the president’s guilt. He just hasn’t managed to find evidence of it yet.

It is telling that two decades ago, when the House of Representatives voted to impeach a president who had committed perjury, Congressman Nadler was one of that president’s most ardent defenders. After all, back then, the shoe was on the other foot; it was a Democrat battling eviction from the Oval Office.

Mr. Nadler’s political posturing and shameless shenanigans have gone on long enough. As he seeks a way to “develop enough evidence” that the president broke the law in any way, his hounding of the duly elected leader of the United States aptly fits the definition of “six ways from Sunday.”

It is high time that this futile campaign of harassment comes to an end, and that Mr. Nadler turns his attention to the reason the office he fills was created in the first place, which was to represent the real needs and interests of his constituents.

In the meantime, the message from the Orthodox Jews in his district is a loud and clear one: Mr. Nadler may be our congressional representative, but in this regard he does not represent us.